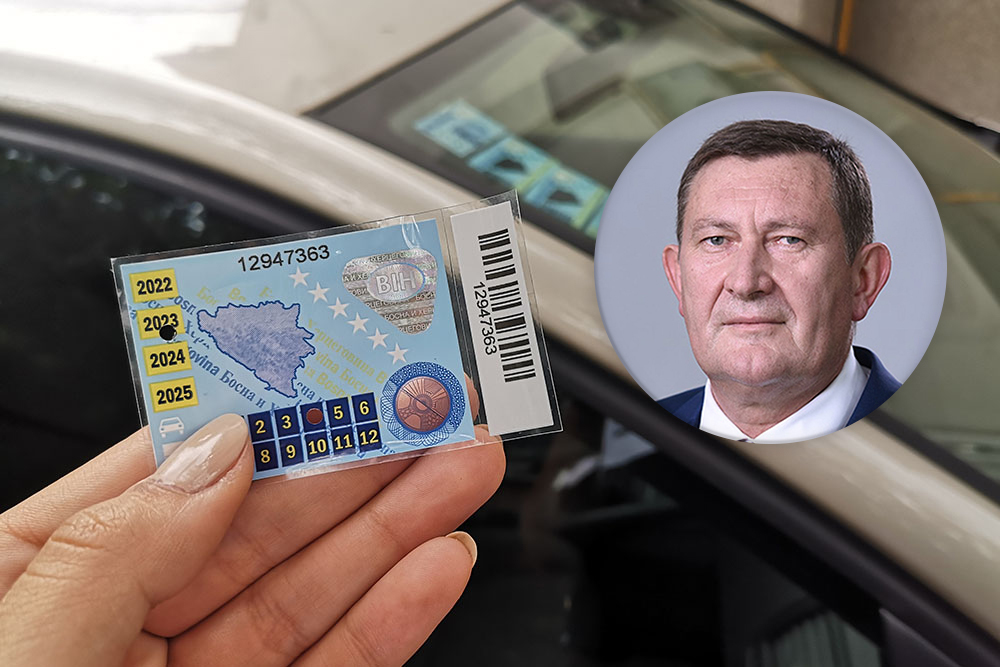 Transparency International in Bosnia and Herzegovina (TIBiH) holds that by adopting the new Rulebook on vehicle registration against the laws and established procedures, Minister Vojin Mitrović misused his position and authority. CIN wrote about this in the middle of last month.

Under this Rulebook, the Ministry of Transport and Communications can entrust the procurement of validation stickers to a private company or a so-called professional institution. According to the new rules, the stickers cost nine marks, almost twice as much as before.

Until now, drivers have been paying for the stickers to the budget of BiH, and under the new Rulebook, the funds should be paid to a private company contracted by the Ministry. In this case, that company would be collecting at least BAM ten million a year from drivers.

Only Minister Mitrović did not have the legal authority to change the rules on vehicle registration in this way. His close associates claim he signed the Rulebook and sent it to the Official Gazette of Bosnia and Herzegovina for publication without their knowledge. TI BiH warns that no article of the Law on Basic Safety of Road Traffic in Bosnia and Herzegovina provides the minister with the authority to regulate the procurement of validation stickers and collection of public revenues.

As evidence, TIBiH indicates that the Rulebook precisely sets the conditions that a private company must meet in order to be selected as a supplier of the validation stickers for the Ministry.

“One of the requirements is that persons employed as team members of the “professional institution” must hold certain certificates. A few years ago, during the procurement of software for the Forests of the Republika Srpska worth millions, only one company had this certificate, and in recent years, this company received tens of millions of marks in tenders in the Republika Srpska”, said TIBiH.

The Commission for Security of the House of Representatives of the FBiH Parliament also requested that the new Rulebook be repealed. The Commission holds that Minister Mitrović unilaterally adopted the Rulebook, thereby violating not only the Law on Basic Safety of Road Traffic in Bosnia and Herzegovina but also the Agency for Identification Documents, Registers and Data Exchange of Bosnia and Herzegovina, the Law on Administration, the Law on Personal Data Protection and the Law on Public Procurement of BiH.

The Agency for Identification Documents, Registers and Data Exchange of Bosnia and Herzegovina (IDDEEA), as the agency responsible for the procurement of validation stickers, warned the Ministry about the unlawful nature of the new Rulebook, but the Ministry did not react. The opinions of other competent authorities such as the Foreign Trade Chamber of BiH, the Ministry of Internal Affairs of the RS, the FBiH Ministry of Transport and Communications, and the cantonal ministries of the interior were also ignored.

Deputy Minister of Transport and Communications Nedžad Branković told CIN that he informed thereon the Administrative Inspectorate of the BiH Ministry of Justice, whose inspectors control the organization and work of the state institutions. According to Branković, the Inspectorate will soon visit the Ministry of Transport and Communications of Bosnia and Herzegovina, and investigate the procedure in which the new Rulebook was adopted.

Minister Mitrović did not answer calls from CIN journalists.

CIN reported on the levies that are being introduced to BiH drivers, which have increased the profits of sole traders. Journalists discovered that Denis Latić, the FBiH Minister of Transport and Communications from the HDZ BiH introduced the new cost of eco-test by circumventing the rules and procedures, thus enabling vehicle inspection centers and private companies supervising the work of such centers to augment their profits. Among them are companies owned by members of the party to which this minister belongs.

Drivers Taxed for a Profit of Private Businessmen
Facebook0Tweet0