Binas, a Bugojno company, earned double money for dealing with 30,000 tromblones’ detonators – a rifle-launched rocket-propelled anti-tank mine. First, the company got paid by the Bosnia and Herzegovina(BIH) Ministry of Defense to destroy them, and then, it collected from Vogošća-based Pretis which bought the mines to sell to Bangladesh.

Because of this and similar deals, Binas workers put their lives and health in peril, according to an indictment against the firm’s director and two ministry’s officials.

In early June, the BiH Prosecutor’s Office filed an indictment against Mario Šego and Šefik Hasanović, former and current ministry’s employees, and former Binas director, Muhamed Gurbet, for misusing the arms surplus and cheating the budget of around 337,000 KM.

The BiH Federation is the major owner of Binas while Gurbeta holds close to 10 percent of the firm’s shares.

The three suspects signed off on fictitious reports about the destruction of various weaponry in January 2009 in which they enabled Binas to collect money for a deal it did not deliver on.

A year and half later, the State Investigation and Protection Agency (SIPA) found nearly 45,000 pieces of tromblones, bombs and airplane rockets in company warehouses, that should have been destroyed.

After the merger of three former armies into the BIH Armed Forces (OS BiH) an inventory showed 31,000 tons of ammunition, of which 25,000 tons were declared unusable. Military and civilian authorities agreed to get rid of them.

Every year the Ministry signed contracts with local firms to de-arm and destroy arms and ammunition. Details about the amount and type of weaponry scheduled for destruction and the price of work can be found in offers and orders. The firms would then send invoices and final reports before being paid. Šego, as a head of the expert team for the Organizing of Dissolution of the Surpluses of Arms and Ammunition at the BiH Armed Forces, and Hasanović, as an advisor at the Ministry for lethal firearms, guaranteed for the reports’ accuracy.

During 2007 and 2008, the Ministry accepted three of Binas’s bids for destruction and dissolution of ammunition, bombs, rockets and other lethal weapons from military warehouses in Krupa near Pazarić, Gabela near Čapljina, and Brizjak, near Vitez.

At the end of 2007, 2,930 shells for artillery weapons and 126 ground -to-sky rockets were transported from a warehouse in Gabela to Bugojno. Two months later, Binas received 86,000 KM, including VAT, to destroy these. 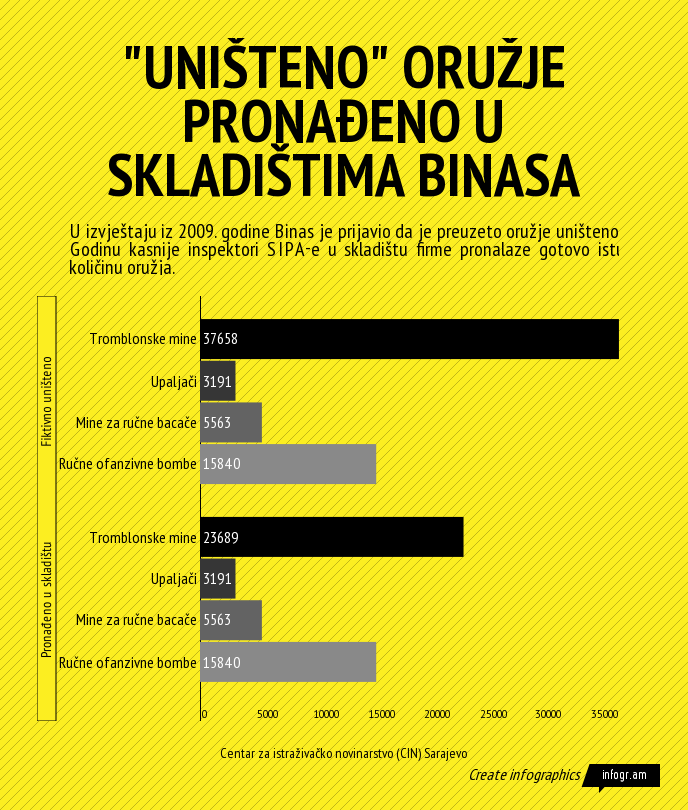 The indictment states that Šego did not check whether the work was done.  A later SIPA report stated that the rockets were not destroyed and the shells were sold as scrap metal.

The shells were not stored in the firm’s warehouses according to the regulations. Based on oral orders from director Gurbeta, the powder was removed and burned. One employee told the prosecutors that “such a way to work is dangerous and unhealthy because of vapors produced in the wake of powders burning.”

Once deactivated, the shells were pressed into blocs of brass and sold to a privately owned Bugojno firm, Axle.

Binas employees testified that there were no reports on the entrance and exit of shells into the factory. They said that the director was in a hurry and that he promised money to 10 workers once they finished the added assignment.

The documents show that Axle bought around 14.5 tons of brass and paid Binas 74,590 KM for it.

The ministry paid Binas almost 112,000 KM for this job in early 2009. The payment was enabled by a fictitious report stating that all tromblons, hand grenades, detonators and pins were destroyed and the missiles were to be destroyed within two weeks.

However, SIPA investigators found a number of weapons supposedly destroyed in the warehouses, while, in actuality, Binas had sent 30,000 detonators and some tromblones to a Sarajevo-base.

Before Binas received the task of destroying ammunition, Pretis had sent them an order for the production of tromblon detonators. Pretis wanted the detonators for mines going to the Bangladesh Ministry of Defense.

However, instead of new detonators, Binas sent to Pretis more than 13,000 full tromblones from the supplies set aside for destruction.

SIPA said that Gurbeta wanted to conceal the real reason for sending the tromblones by writing a memo to Pretis asking for help in destroying them. Authorities did not find such a document at Pretis..

Gurbeta also sent Pretis five Binas workers in order to hide the old serial numbers and stamp on new ones. Eventually, the old detonators were installed in new tromblones.

Pretis was missing around 17,000 detonators to complete the delivery. Some of them Pretis manufactured itself and then sent to the Bugojno firm to be fitted with parts of disassembled detonators from the supplies for destruction.

According to an expert on inflammables Binas workers who took detonators out of tromblones and disassembled them risked their health and lives. He said that this was done in order to keep the salable scrap metal parts.

The detonators were completed and sent to Pretis by September 2008, and 30,000 were sent to Bangladesh.

Director Gurbeta denied the charges. He told reporters from the Center for Investigative Reporting (CIN) that Binas’s contracts signed with the Ministry of Defense gave it a free hand in handling scrap or usable parts.

He said that in this way the Ministry wanted to help the firms. “If we had an interest and if we had a buyer for some products, we could have used the old parts…without producing the new ones. “ He added that they have produced all new parts for Pretis.

CIN reporters have come by a contract that the firm signed with the Ministry in 2007 and 2008. The contract does not specify who owns parts and scrap that resulted from de-arming or destruction of ammunition.

Before the final agreement on the costs of the destruction of tromblones and other explosive devices, the Ministry informed Binas that all scrap metal resulting from de-arming and destruction belong to the state.