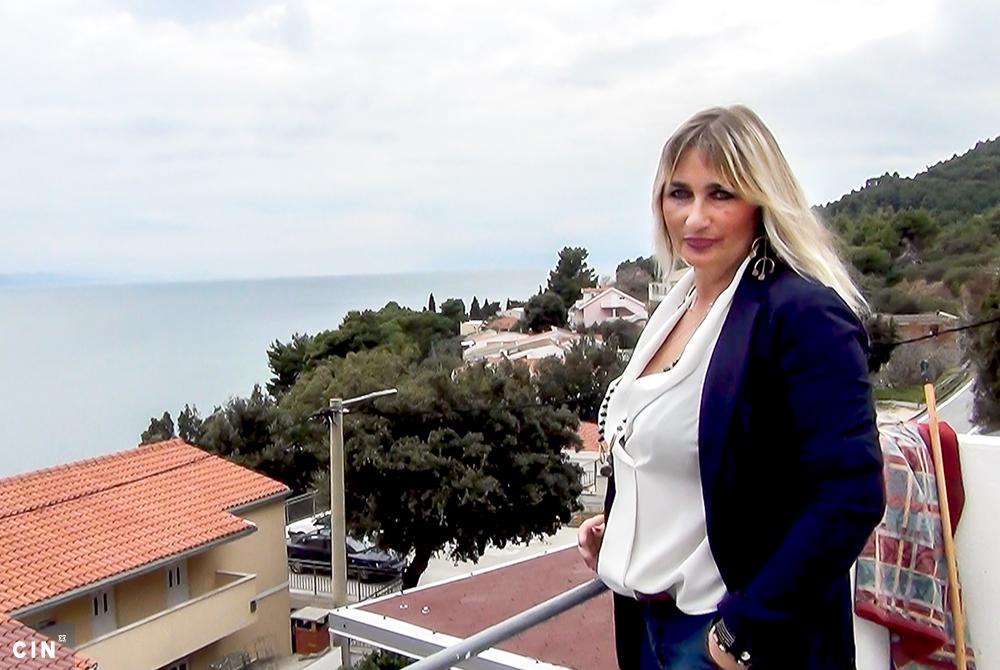 For years, a former Municipal Court judge in Sarajevo, Lejla Fazlagić, meted out justice to both the dead and alive. She conducted fake property litigations in her courtroom sometimes involving plaintiffs and defendants who had already gone on to the afterworld. The result of these fabricated proceedings was always the same – the real estate of a departed person ended up titled in the name of judge Fazlagić, her relatives, or friends.

Between 2011 and 2016, Fazlagić disinherited dozens of real property owners in Sarajevo by deeding their houses, condos, offices, and real estate to people with no claim to them. She mostly targeted the properties of Sarajevo Jews who perished during the Second World War as well as those of other dead Sarajevans. Then again, some of the property belonged to a few firms.

The Prosecutor’s Office of Sarajevo Canton filed an indictment against Fazlagić in the beginning of 2018 listing 19 properties worth nearly 8 million KM as illegally deeded. She was helped in this enterprise by certain judges, attorneys, notaries, court and municipal clerks and others. Prosecutors say that they were a part of an organized criminal group led by Alija Delimustafić, a former interior minister of the war-time Republic of Bosnia and Hercegovina.

Some properties were sold soon after the court cases wound up, while Fazlagić and her father kept two apartments in downtown Sarajevo valued at 1.46 million KM.

After the investigation opened in 2016, Fazlagić resigned and fled to Croatia. She told reporters from the Center for Investigative Reporting in Sarajevo (CIN) that she did not belong to any group and that she had been set up.

The indictment describes how the last year of Fazlagić’s career as a Sarajevo judge was marked by illegal dealings – abuse of office, money laundering, forgery of documents and fraud all committed via her connections in the government.

Prosecutors charged her with setting up fabricated property litigations in which she abused personal data of deceased persons and handed down rulings based on forged documents and fake consent agreements.

The indictment states that she would get tipped off about properties that were the subject of litigations from a friend, the former head of the Department for Property and Legal Affairs of Stari Grad Borough, Lejla Cerić.


Boris Kožemjakin, president of the Jewish Community in Sarajevo, said that Cerić on several occasions asked about the abandoned property of Jews, most of them properties that belonged to Holocaust victims.

“She conducted proceedings and in some ways filed requests to the community to see if there was anyone who stood to inherit some condos, land etc.” said Kožemjakin.

Cerić did not want to comment on allegations she played a role in the group, while Fazlagić denied that she got tips about abandoned condos from the former borough official. Fazlagić said the two of them were not on good terms: “I have no idea what she was doing, nor do I know about Stari Grad Borough.“

When Fazlagić learned that smack in the city center near the Cathedral of Sacred Heart, was an abandoned building that had belonged to Jewish families named Cindorf, Baruh and Maestro, she moved to grab it. In early 2012, Fazlagić unsealed from the archive a case on which she had worked and based on it she opened a new case and assigned it to herself. In this way, she got around a computer system that randomly assigns cases to prevent judges from handpicking them.

Fazlagić told CIN that she should not be blamed for that and instead pointed a finger at attorneys and at the court clerks who maintain the computer system. In the new case file, she inserted a fake lawsuit that listed her grandmother Selveta Crnalić as a plaintiff against defendants Albin and Erna Cindorf. Crnalić, who had been dead for 26 years by then, seemed to be demanding more than half of their building. According to the Jewish Community in Sarajevo, the Cindorfs died in Israel.

In May 2013, in order to give legitimacy to the proceedings, Fazlagić sent courier Zaim Spahović with a lawsuit to made-up addresses in the neighborhoods of Hrasnica and Butmir on the outskirts of Sarajevo, according to the indictment.

Spahović returned a dispatch note with fake Cindorf’s signatures confirming that they had been served the lawsuit. Fazlagić also inserted another fake document into the case file with which the Cindorfs accepted the lawsuit. Spahović did not want to talk to CIN.


Based on these documents, the judge ruled in favor of her deceased grandmother, and in mid-2013, Crnalić became a 67 percent co-owner of a 243 square-meter property in downtown Sarajevo.

Having received a title, Crnalić was allowed to go back to being dead when Fazlagić opened probate proceedings. She titled her grandmother’s newly acquired property to her father Fahrudin Fazlagić. She did this without his knowledge by forging a power of attorney for which she hired lawyer Ismet Hamzić, according to prosecutors.

Hamzić told CIN that the power of attorney was legitimate and that this was a routine task for him. In March 2014, the property was titled in her father’s name. According to an expert witness appraisal, it is worth more than 1.2 million KM. 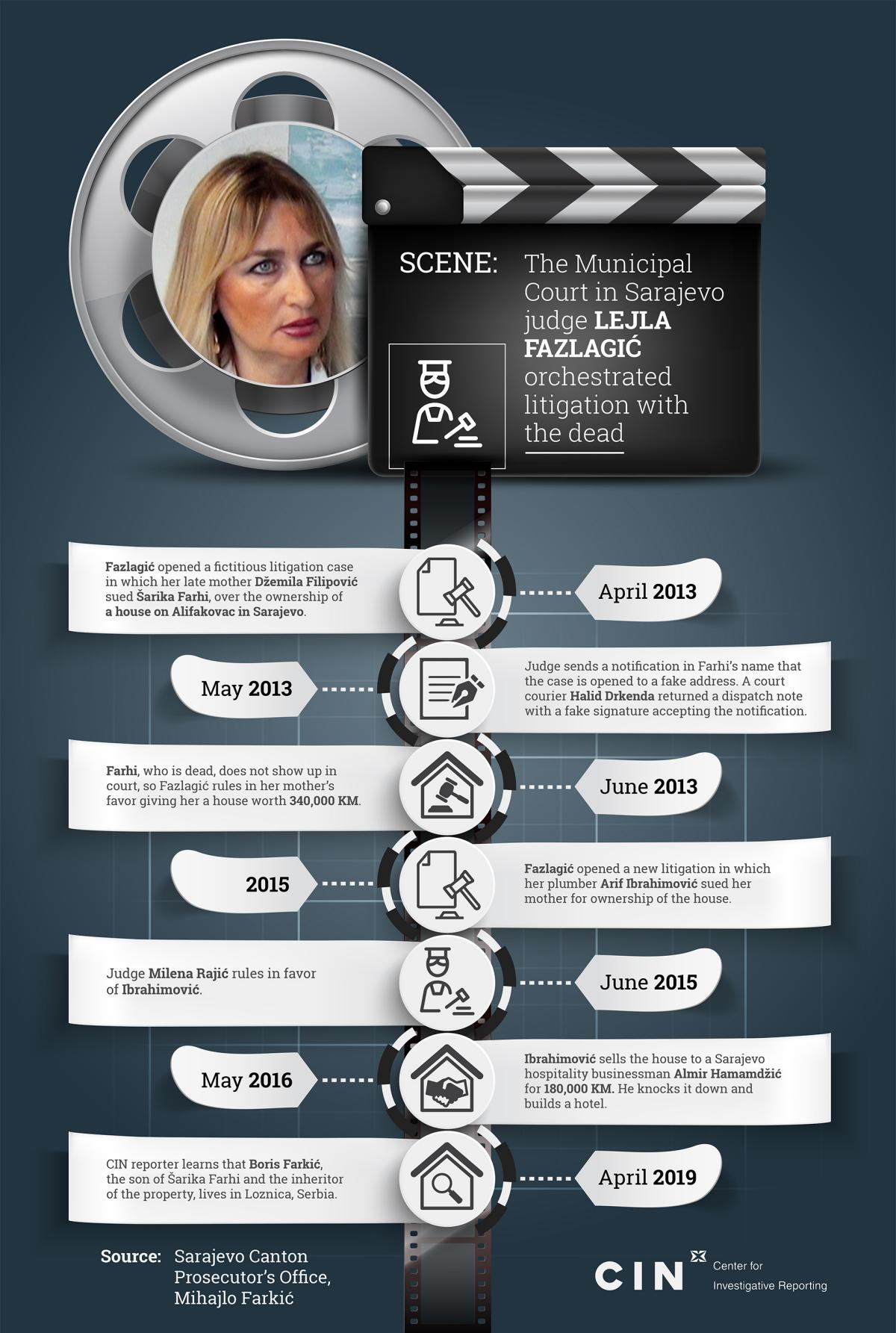 Having deeded the Jewish property to her family members, judge Fazlagić went on to conquer new space in the same building. She filed a request with the Stari Grad Borough’s Department of Zoning asking for approval to upgrade the roof space into residential and office space. To the request, she attached a document claiming that all owners and tenants consented to this change. Her grandmother and two other owners were all dead at the time. Death certificates show that Regina Maestro and Roza Baruh died in Croatian concentration camps in Jasenovac and Đakovo.

However, the documents the judge filed to overhaul the roof, portrayed the three woman as living in Germany, from where they’d sent in powers of attorney verified by a stamp from the BiH consulate in Frankfurt. The diplomatic mission later informed the Sarajevo Canton Prosecutor’s Office that the documents were forgeries.

The only living signature party to the consent was a Sarajevo attorney Kemo Kapur. The indictment alleges that he kept mum about his dead neighbors. He resided with his family in the building based on an agreement with Sarajevo Housing Stock. His law office is also registered at the address.

The upgrade was approved by the borough. In 2015, judge Fazlagić took title to an 87 square-meter loft worth around 235,000 KM based on the fake consents.

Several months before the approval was issued, Kapur filed a fake lawsuit on behalf of his wife Fatima against the deceased Regina Maestro and Roza Baruh to get a deed to the apartment in the same building. Fazlagić took the case, again by by-passing the computer. The case file then got a made-up reply from the long-deceased Maestro and Baruh confirming to had received the lawsuit. According to Sarajevo Canton prosecutors, attorney Kapur wrote and undersigned the reply. Fazlagić ruled in favor of Fatima Kapur, who thus became the owner of the apartment worth 614,285 KM at the end of 2013. The Sarajevo lawyer did not want to talk to CIN about charges against him.

On several occasions Fazlagić abused the identity of her deceased grandmother in fake property lawsuits. In one though, she used personal details of her mother Džemila who died in a 1988 car accident. In order to hide the connection between herself and the plaintiff, Fazlagić used her mother’s maiden name – Filipović.

Fazlagić followed her regular pattern. In an old archived case file, she filed Džemila Filipović’s lawsuit against the late Šarika Farhi. This time the booty was Farhi’s house in the Alifakovac neighborhood of Stari Grad Borough. This time again, the fake documents certifying that Farhi received the lawsuit were filed.

When Farhi did not respond to the court’s summons, Fazlagić ruled in her mother’s favor. The house was titled into her mother’s name.

Fazlagić said that she could not speak in more detail about the charges because she was preparing her defense. While investigating the genealogy of the Jewish family Farhi, CIN reporters uncovered that Šarika died in Serbia in 1985 and that her property passed to her son Boris Farkić, a doctor from Loznica. The Farhies changed their name after the Second World War to Farkić because of anti-Semitic sentiments.

Boris’s son, a Belgrade physician Mihajlo Farkić, was surprised to learn from CIN reporters about the fate of his grandmother’s house. According to an appraisal prosecutors ordered, the inheritors of Šarika Farhi have been damaged for 340,000 KM.

To keep the house in her mother’s name was too risky for Fazlagić, so the judge came up with a new litigation. This time, Arif Ibrahimović, Fazlagić ‘s plumber and painter, filed a lawsuit against her mother, claiming that the property belonged to him.

Sarajevo Municipal Court Judge Milena Rajić ruled in favor of Ibrahimović in June 2015. She said that Filipović approved the lawsuit. The prosecutors accused Rajić of handing down an illegal ruling because she knew the defendant was a dead person.

CIN reporters tried to interview Rajić, but she did not answer their calls.

In middle of the following year Ibrahimović sold the house to a Sarajevo businessman Almir Hamamdžić for 180,000 KM. He built a hotel on the plot. Despite fetching a good sum for the sale of Alifakovac property, Ibrahimović lives in the basement of a decrepit house on the sides of a Sarajevo hill Hum. He did not want to talk to reporters.

Even though Fazlagić told CIN that she was not interested in material things, the judge owns valuable properties in BiH and Croatia. Apart from Sarajevo condos she acquired through suspicious litigations, the judge and her father also own a summer house in Mala Duba, a pretty town in Makarska Riviera where she now lives with her daughter. In Croatia Fazlagić co-owns apartments in Mali Ston on the Pelješac Peninsula. She bought that with Goran Cerić, the funeral director of a public company JP Pokop Sarajevo.

According to information from the contract, Cerić and Fazlagić paid €20,000 for a quarter of a decrepit building of 61 square-meters and 263 square meters of garden. The house was reconstructed and the two of them told CIN that Cerić nearly paid out the judge for her investment.

“For me this whole case is a show trial and I will prove that,” said Fazlagić. “I will return to my Sarajevo. I will become a judge again.”