The Court of BiH ruled detention for Kemal Čaušević, former director of UIO BiH, to guard against his fleeing the country, hiding evidence and tampering with witnesses. 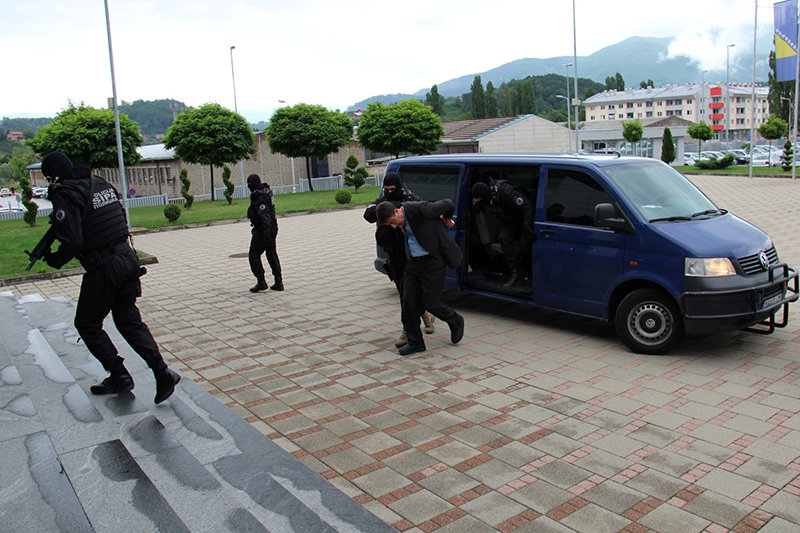 The Court of Bosnia and Herzegovina (BiH) ruled today that Kemal Čaušević, former director of Indirect Taxation Authority (UIO), be held for 30 days in jail. Another eight persons arrested with Čaušević during the police operation code-named Pandora will also remain in detention.

Kemal Čaušević Arrested
Kemal Čaušević, former director of BIH Indirect Taxation Authority, was arrested this morning in a police operation together with 53 other persons, including some of the Authority’s employees.

Along with Čaušević, other persons to remain in jail are: deputy director of state Cusoms Department Zdravko Cvjetinović and his brother Zoran, Janko Jovanović and Milanko Nikić, the current and former head of custom’s branch office of Bosanski Brod; Miroslav Kragulj, the head of the border crossing Donja Gradina; Enisa Imširović and Jusuf Ćosović, employees from a Brčko firm Novko Prom and a Kiseljak-firm Kodra respectivelly, and Anes Sadiković who’s been prosecuted before the Court of BiH in another case on the same charges.

The detention was imposed because of the danger of fleeing and fear that the suspects would tamper with the investigation by destroying or hiding evidence and tampering with witnesses and accomplices.

During the police operation Pandora 54 persons were arrested in the past two days on organized crime charges, customs and tax evasion, money laundering and abuse of office or authority in connection with the import of textile and other goods in BiH.

The state prosecutor Dubravko Čampara said at a detention hearing that there had been an organized group inside the UIO since its inception that caused damage in the amount of 2 billion KM a year. “Some importers of textile were favored in their cooperation with Kemal Čaušević,“ said Čampara.

The importers’ fake invoices were cleared or they were made smaller in value. The money left from unpaid duties and taxes was split with Čaušević. “After he left, Zdravko Cvjetinović took over. Their property increased during this period. It’s enormous richness. Such property cannot be acquired through salary, only illegally, “said Čampara.

The prosecutors said that the state has been damaged for an unpaid debt in VAT and custom duties in BiH that amounts to around 300 million KM.

Čaušević’s attorney Asim Crnalić said that his client had an income of 1.8 million KM legally since he started working.

The Center for Investigative Reporting in Sarajevo (CIN) investigated Čaušević’s property and found that he owned nine apartments and offices and 20,000 square meters of land worth more than 1 million KM. His income during that time does not come close to the cost of the investment.

After CIN published its story, the Court of BiH has frozen eleven Čauševićs’ properties. The Court’s decision read that there were several related investigations against him on charges of abuse of office and authority.

According to the BiH Prosecutor’s Office’s press release, the investigation in this case will along with the UIO include big V.A.T. debtors such are the Bureaus for Intervention Storage in both entities and other agencies and public and private companies.