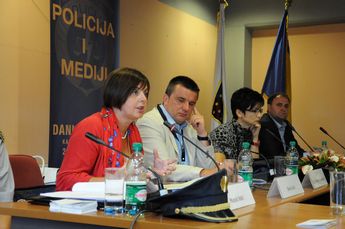 In order to serve the citizens and public, journalists and police must have a better cooperation concluded a round table participants held on the occasion of the Sarajevo Canton’s Day of Police.

Brčko District Police spokesperson Halid Emkić saud tgat reporters always want more compared to what police gives them. “Police is torn between the respect of human rights and the need of public to be aware of what’s going on,” said Emkić. He said that the journalists focus more on the act of arrest and the accompanying activities than to follow-up the prosecution and a potential verdict.

Mustafa Bešić, a chief of Novi Grad police station, warned that the Privacy Law in Bosnia and Hercegovina (BiH) protects suspects and defendants and those should not be publicly exposed. Bešić said that if they were exposed that could affect witnesses or suspects could try to hide evidence. “Public interest is not the interest of public. Records which are confidential and those that are publicly revealed should be edited with the goal of respecting the laws which cover the work of police and the work of media,” said Bešić.

Borka Rudić, secretary general of a Sarajevo-based Association BH Journalists said that the reporters have a right to access to information, but that they are also responsible for the protection of confidential sources. “In the course of his duties, a reporter has a right to freedom of movement, so that the police cannot ask a reporter to show his press pass, unless a permit is required to enter a crime scene,” said Rudić. She said that reporters have also to cooperate with police, reveal their identity upon request especially in crisis situations and to respect journalistic ethics and professional standards.

The round table “Police and Media” was held as a part “The Days of Sarajevo Canton Police 2012“ held between August 26 and 29. The main event is to be held at Zetra Olympic Hall tomorrow. The police units will stand in formation, with officers to be recognized and exhibition held.