A Mayor of the Year Award hangs in the office of Bužim Mayor Agan Bunić.

He received it at a ceremony for the best executive in Bosnia and Herzegovina (BiH), an event that is partly financed through the sale of magazines and books sold mainly to the award winners. .

Bunić supported the event by buying 3,000 KM worth of promotion material which he planned to pay for with money allocated to the municipal Center for Social Work. When the center’s staff protested, the mayor blocked their funding and the center did not hand out any welfare funds for 2.5 months.

Another nine executives received certificates of recognition last year. An investigation by the Center for Investigative Reporting in Sarajevo (CIN) found that award ceremonies were financed with at least 31,500 KM in taxpayer money they had overseen.

The officeholders toed the line of a potential conflict of interest by wiring budget money to the organizers of the events on which they received the certificates.

Bunić spent budget money not only on books, but also for marketing. The selection of Mayor of the Year was preceded by an interview and a cover photo in BH Business Magazine that cost 3,510 KM.

Magazine’s editor Rašid Hakić said that he published affirmative stories and that Bunić wanted one. He told CIN he recommended some interview subjects for the Best Executive award to the event’s organizers, whom he knew. His recommendations, he said, won awards.

The then director of the Center for Social Work, Emir Aldžić, was Bunić’s peer from the Party of Democratic Action. Aldžić supported the idea that the Center should pay to publish the mayor’s interview.

Bunić said the Center had a surplus of money from a fund intended for women on maternity leave. He said the surplus resulted “because no one gave birth, not because the mayor closed his hand.”

He reallocated the money that the municipality owed the Center and instead of welfare it went to media. Center director Aldžić put out a pro-forma tender procedure for negotiated contracts which the law allowed for small-value procurements. On the same day, he issued a decision about the selection of a contractor and signed a contract with Aldijana Kotorić, director of Medium LLC, the publisher of BH Business Magazine.

A “negotiated tender is a legal option…Everything was done according to the law and I don’t understand how come that has become an issue now,” said Bunić.

Mayor Marketing at the Expense of the Poor 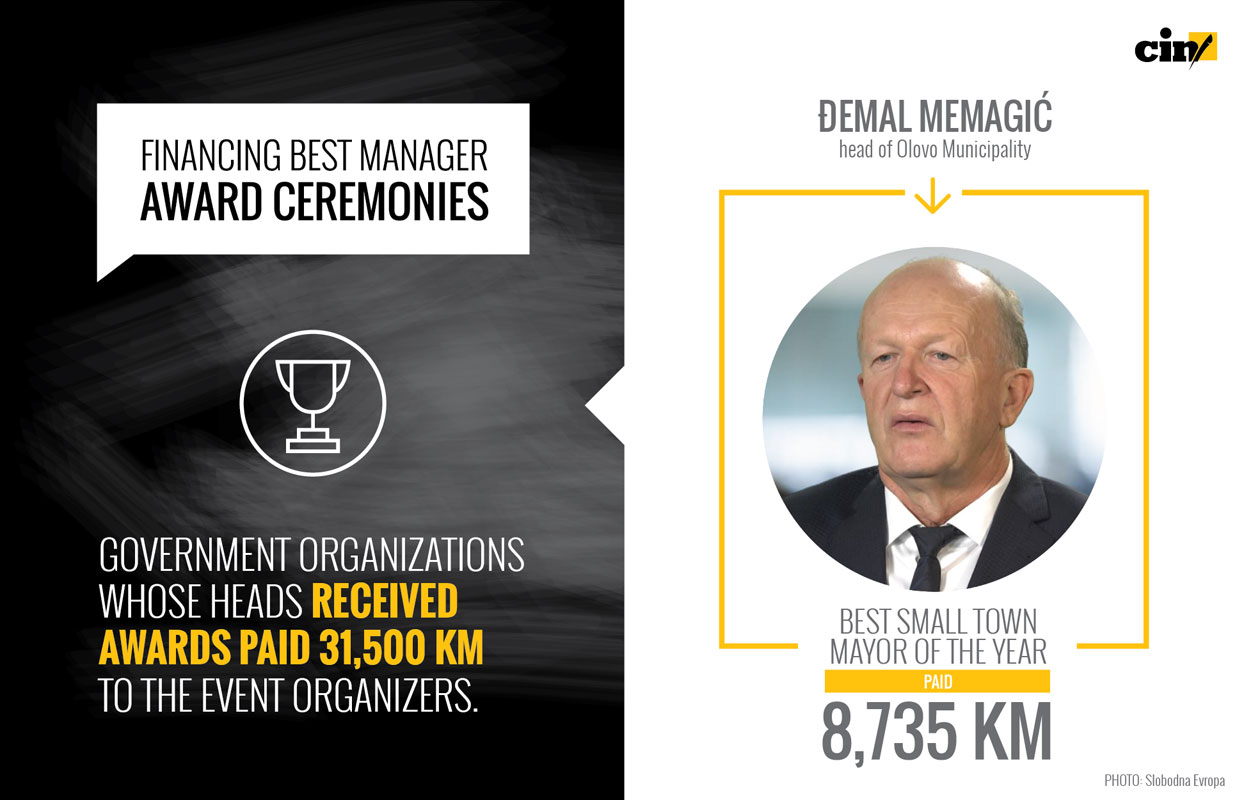 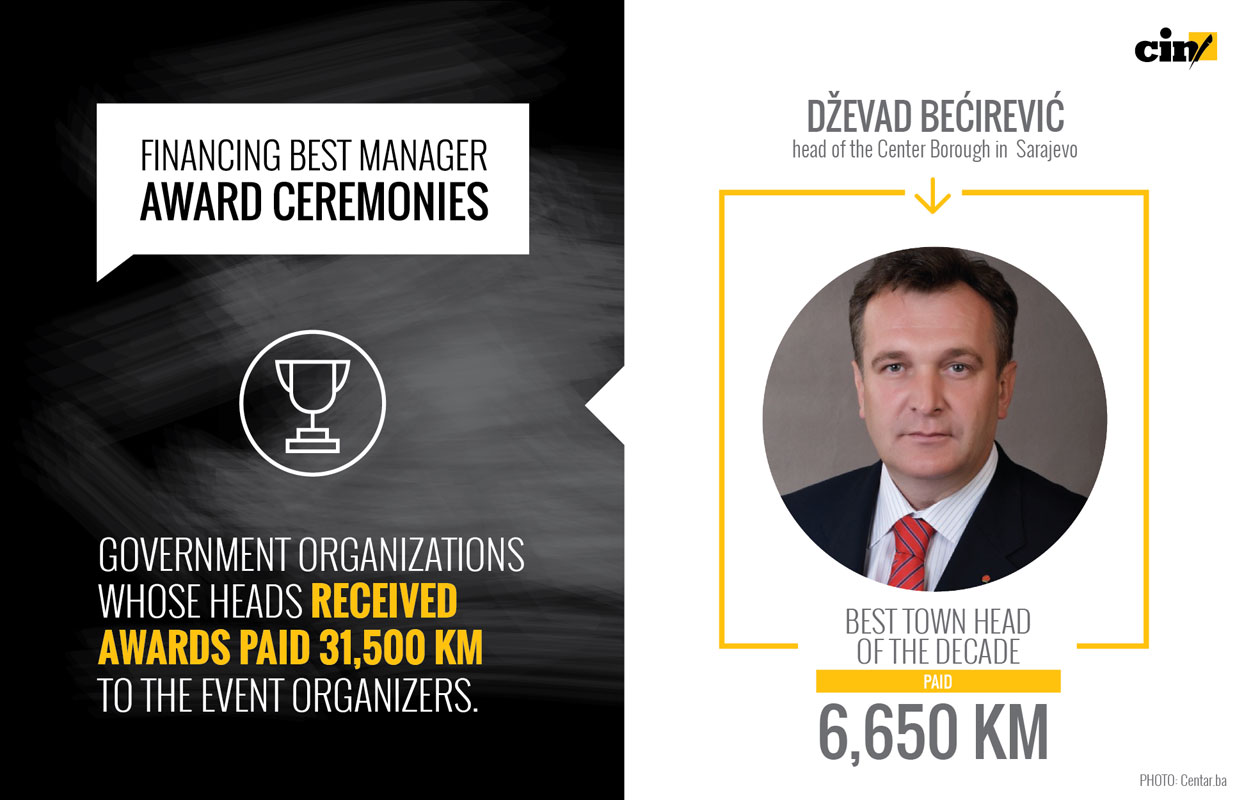 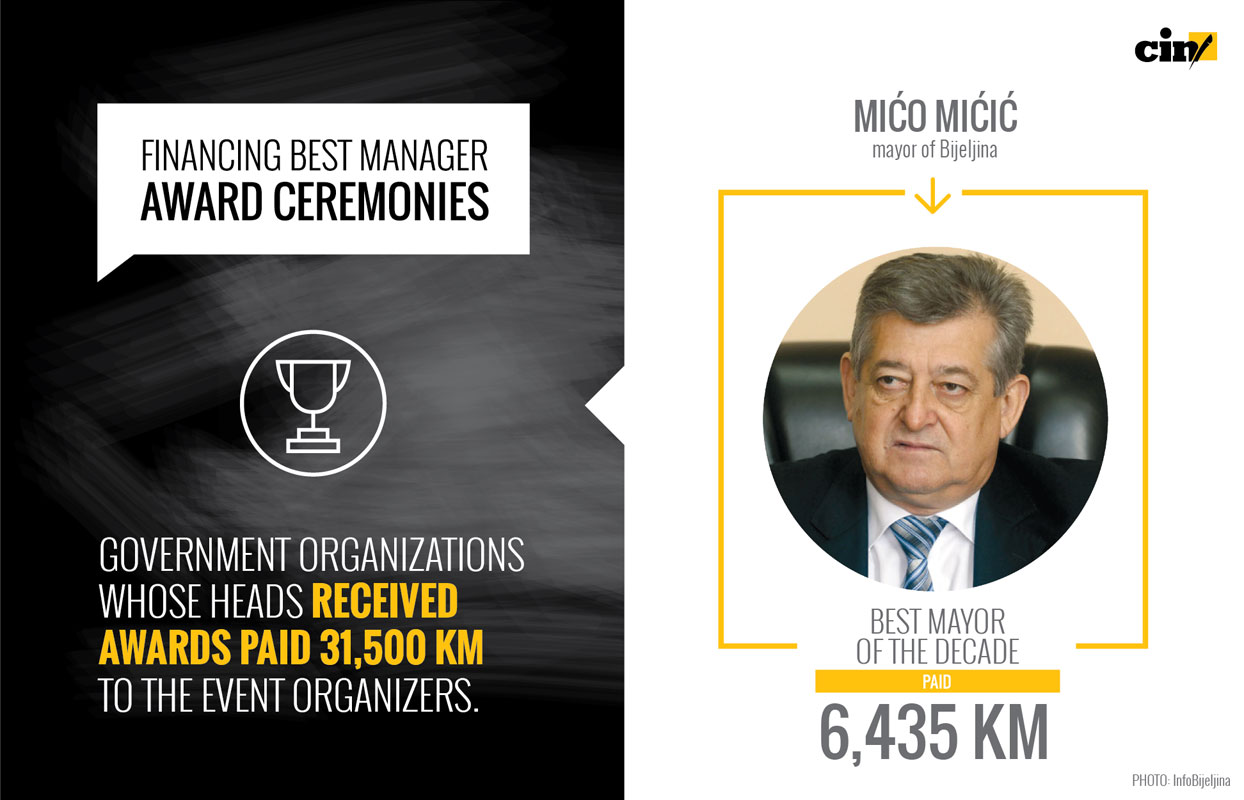 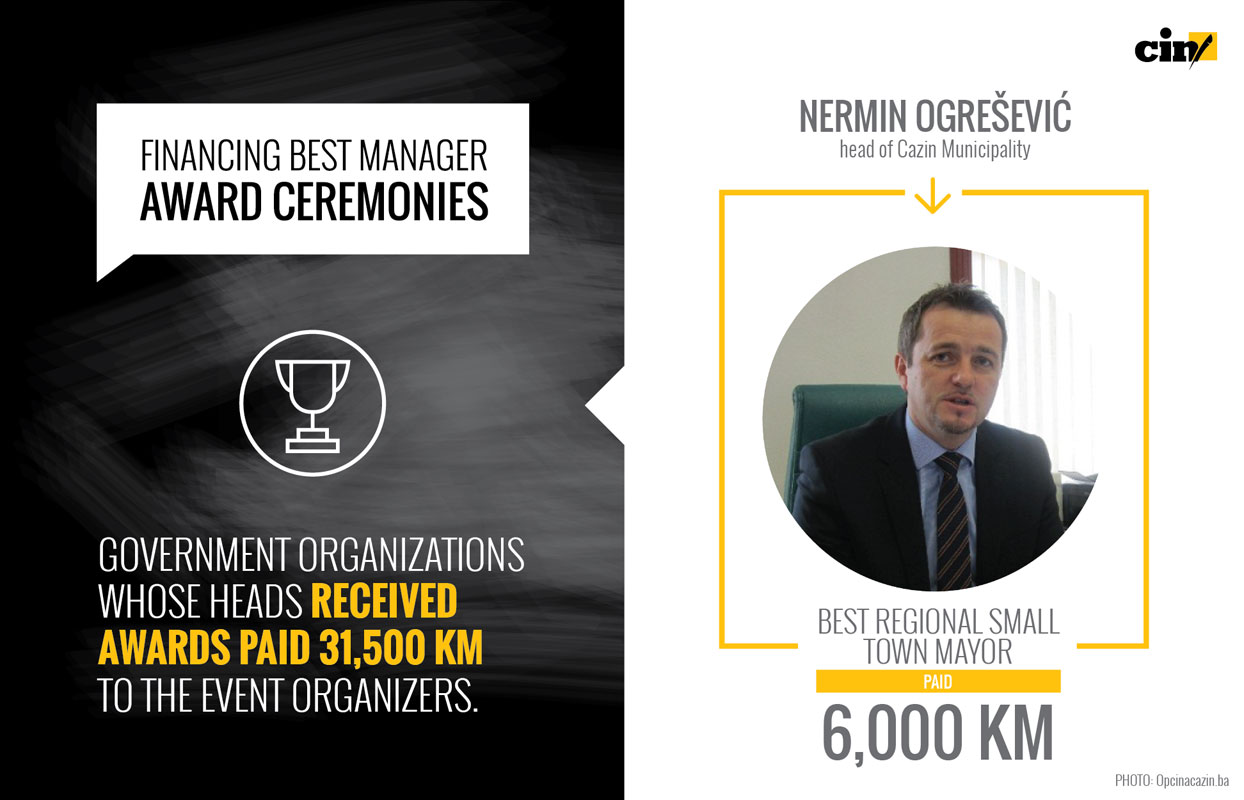 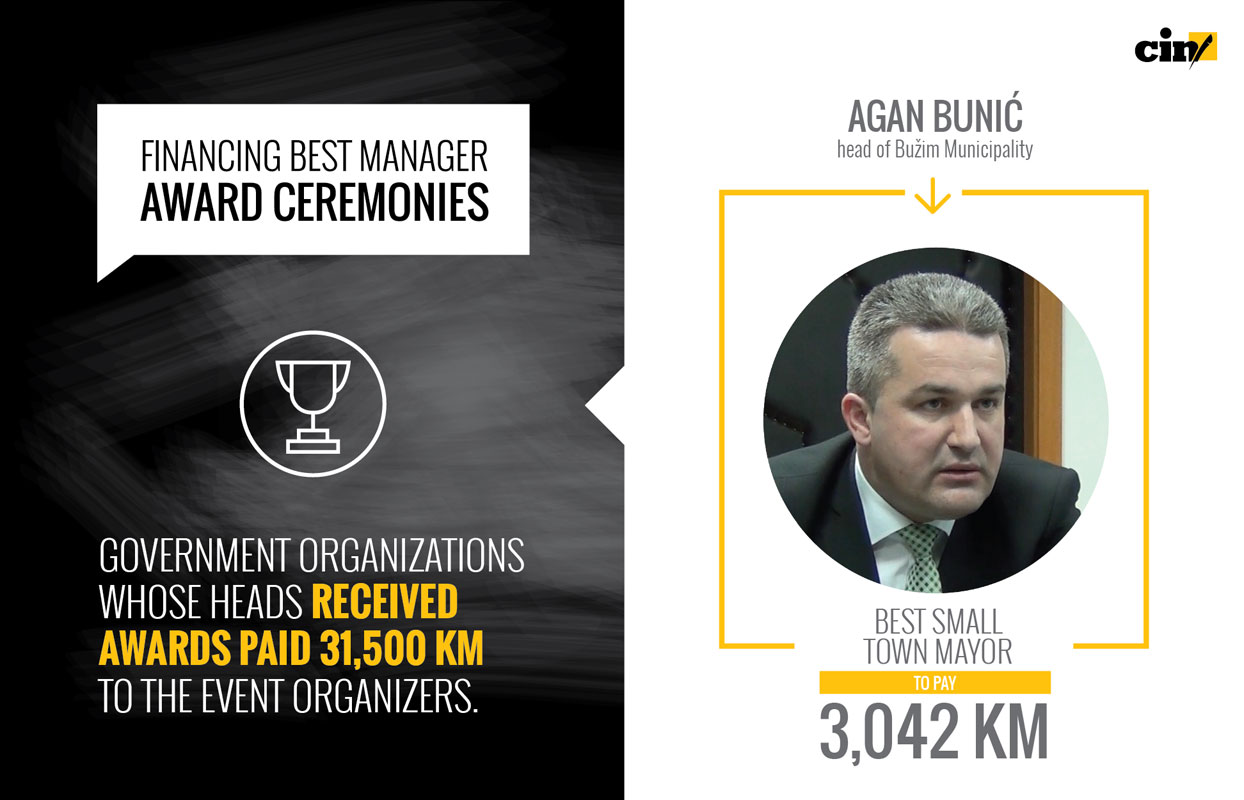 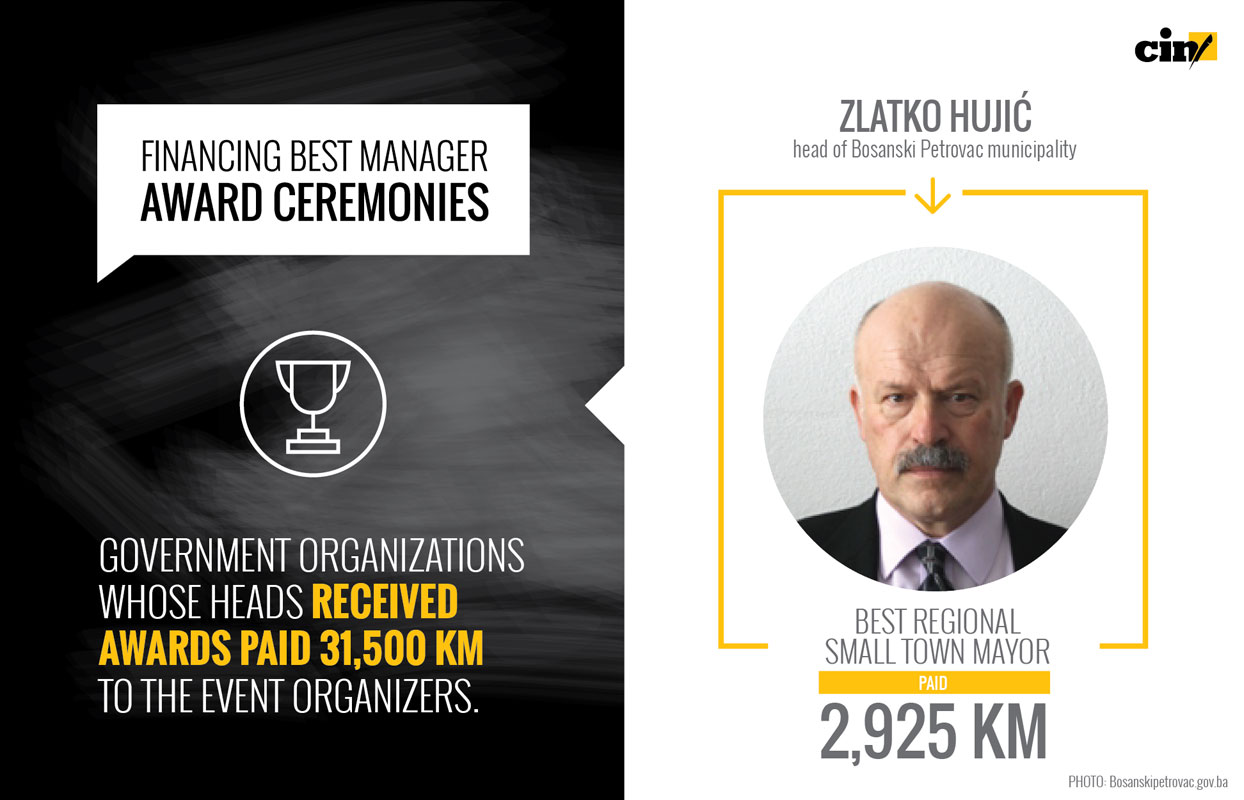 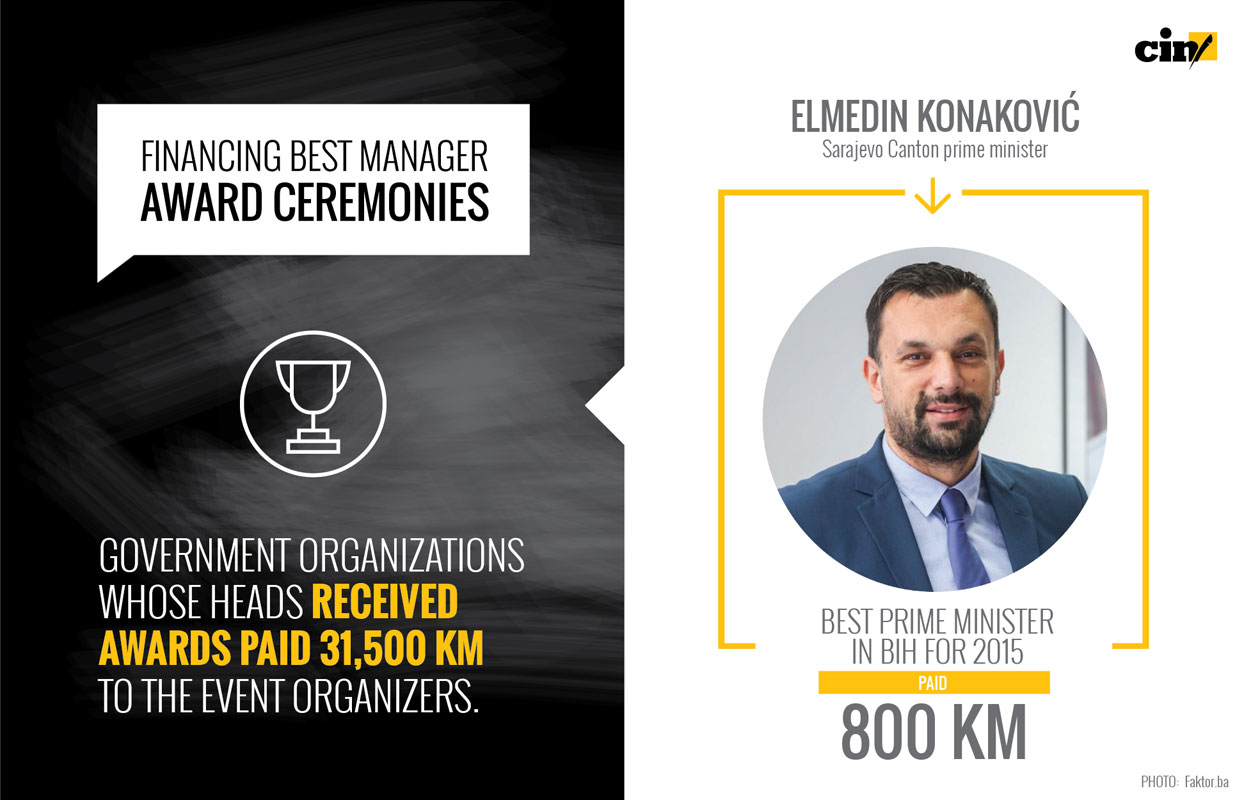 In December 2015, two and half months later, an award ceremony for the best company executives and companies in BiH was held in Banja Luka. Bunić received a “Mayor of the Year” award on that occasion.

The event’s organizer was Pane Škrbić and his European Association of Managers — BH Manager. Along with the event in Banja Luka, Škrbić with several other people organizes an award ceremony for the best manager of Southeast and Central Europe that is held in Sarajevo during summer.

Last year, about 90 awards went to various persons and companies during these events.

The awards are given for such things as Life Achievement; Manager of the Year or Decade; Person of the Year; Business Champion; Best Mayor and Best Minister.

Organizations and past winners — who may go on to become jury members — can nominate runner-ups. Škrbić said that the event promotes individuals and companies and that every winner is motivated to nominate a better runner-up for the award than himself. He said this assures that the value of the award goes up because winners know that if they nominate “a fool” their own awards are devalued.

He explained that the jury made a short list of at least 30 nominees whom they interviewed and asked for approval of their nomination. “They are sent a letter of intent. ‘You have been shortlisted …Do you accept it?’” said Škrbić. Then they ask them to buy books and the magazine Euromanager and “The Most Successful Persons and Companies – Champions of Business.”

This event is financed from the sale of the books and through the business forum and production of promotional video spots done by Škrbić’s firm Stop from Zenica.

Škrbić told CIN that buying books is not a requirement for the award, and that the information about the winners would end up being published, regardless of whether they bought books. He said the costs would be made up by those who bought multiple books.

Bunić supported the event by buying 100 issues of Euromanager and 20 books titled “Most Successful People and Companies – Champions of Business.” He was billed 3,042 KM. Bunić planned to use the Center for Social Work again, but this time he faced opposition. The Center now was under new management and acting director Samra Mehić refused to foot the bill.

The mayor then blocked funds intended for the Center. The Center’s employees and their beneficiaries got no money for 2.5 months. According to the Center, around 30 permanent beneficiaries receive a monthly welfare check of between 50 KM and 70 KM and another 70 temporary beneficiaries may get up to 100 KM from time to time. Mehić said that they do not have enough money to give to all those in need.

President of the Welfare’s Board Izet Ljubijankić said that the mayor should have marketed himself at the municipality’s expense. Now that he had intended to do it with the Center’s money, he should have passed on the award to it: “When welfare beneficiaries come to pick up a sack of flour, show them how the Center bought a certificate of recognition with the money that was intended for the poor.”

Money for the Center was unblocked only after written and verbal appeals by the acting director. “I have not caused a damage and I don’t want to suffer the consequences,” said Mehić who has not yet paid the bill for the books.

Private Interests in the Management of Public Funds

Apart from Bunić, another nine officeholders received plaques or crystal figurines during last year’s events. From the government funds six of the laureates controlled, the organizers received at least 31,500 KM for magazines and books and for a registration fee and marketing videos by Stop. These agencies all agreed that they spent money in order to promote the institution, not individual officials.

“The fact of the matter is that we do care that certain people show up,” said Škrbić asked why some people were not offered books and magazines to buy.

As in the Bunić case, Sarajevo Center borough used public procurement. Borough officials explained in a letter that Stop offered the best deal for shooting and broadcasting a promotional film about the borough. Center Borough signed a contract with Škrbić’s Stop two days after Bećirević was announced as “Best Mayor of the Decade.”

Like Bunić, the Mayor of Bosanski Petrovac, Zlatko Hujić, had spent 3,500 KM to have an interview published and to be on the cover of “BH Business Magazine“ before the award ceremony . The municipality spent another 2,925 KM so that Hujić could attend the business forum organized by Škrbić.

According to the law, if there’s a collusion between private interest and public office that may impact legality, fairness and impartiality in the course of performing public office, than there’s a conflict of interest that needs to be resolved.

Mervan Miraščija from the Open Society Fund in BiH, which has monitored implementation of the Law on Conflict of Interests for several years, said that there was sufficient ground to investigate whether these mayors had been involved in conflict of interest.

However, in the Federation of BiH where most of this office holders work, no regulatory body has tried to implement the law or to delineate what possible conflict of interests are in the run-up to the elections.