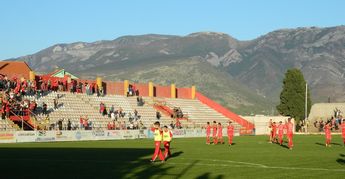 In one of the coming sessions, Mostar city councilors will have an opportunity to review the Report on the Audit of Financial Statements of the Public Company Waterworks which the City’s Department of Internal Affairs conducted in February 2011. Among other things, the report proposed that the debt of the Football Club Velež towards the Waterworks should be classified as doubtful and in the case of default it should be written off.

The Center for Investigative Reporting (CIN) learned that Velež defaulted on a 22,383 KM loan which the Waterworks cosigned. The Waterworks’ director Mirsad Huseinagić, who took this decision, also served as the club’s vice-president between 1999 and 2006.. He took over the firm’s management in February 2001.

According to documents that CIN has acquired, Velež took a short-term loan worth 30,000 KM from a Sarajevo-based Universal bank in September 2001. The loan was due in 60 days at an annual rate of 22 percent. As insurance, the club gave its promissory notes, its money payment orders for its transaction account, Waterworks and a Public Company “Vegetable Market’s” promissory notes. The loan contract specifies that payment must be made within three days of receiving the statement of accounts, otherwise late payment fees will apply. For unpaid loan obligations, the bank would calculate a 30 percent default interest rate. Velež had not paid back the loan and by 2003, he owed the bank 42,723 KM in the principal and interest.

In January, 2004, a meeting took place in the bank. Present were the representatives Velež Kemal Šestić and Zijo Demirović, Alma Okić from the Universal bank and Muhamed Marić from the Jablanica firm Granit. It was agreed that Granit would pay 30,000 KM by the end of the month to the bank as part of its sponsorship contract with Velež. Granit was supposed to pay another 6,500 KM by the end of February towards the interest rates. As for other debts, it was agreed that a new agreement would be drawn about the way Granit would pay for it, but this was not honored. Meanwhile, UniCredit Bank acquired Universal bank and the former bank deducted the remaining Velež’s debt of 22,383 KM from the account of its co-signer—Waterworks.

Since then, the director Huseinagić has been trying to get Velež to pay its debt by writing memos stating that Velez owed them money. In an interview with CIN, Huseinagić said the Waterworks articles of association authorize him to sign a contract that does not exceed 50,000 KM. He believes that Velež will eventually return the money. Asked who was going to give Velež the money, he replied: “The donors. These are Velež’s costs.” Even though he acknowledged that lending was not a good business move on his part, he said: “I don’t think that is what matters. As you know, it is difficult for the sport to find funding, but I think it would be out of place to comment whether Waterworks gave a loan or not.”

According to the data from the Sport’s Association of the City of Mostar, Velež is the most sponsored sport club in Mostar. In the period between 2007 and the end of 2011, it received over 496,211 KM from the Association for its functioning. The association is the umbrella sport organization which is largely funded by the city budget, and the money it receives is shared among around 70 sport organizations.