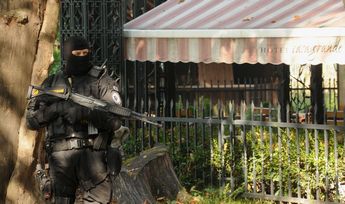 The State Investigation and Protection Agency (SIPA) has gathered evidence on at least six unsolved murders and one attempted murder, robberies worth millions of dollars and other serious organized crimes such as money laundering, narcotics trafficking and abuse of office.

According to Sarajevo Canton Ministry of Interior, Kelmendi was not arrested. CIN reporters have written extensively about Kelmendi since the US State Department had blacklisted him as a drug king pin in June.

In today’s raid were also arrested Bojan Cvijan, former head of the narcotics department in SIPA; Ljubiša Lalović, a state border policeman; and Marko Krajišnik. The three had been also jailed when Darko Elez was arrested in Serbia. Elez was later sentenced to nine years in prison for a number of criminal offenses.

SIPA director Gordan Zubac said in a press conference that his agency was investigating the biggest criminal syndicate in BiH, with the associates in the neighboring countries.

“This is the first phase,” Zubac said. “Further coordinated actions and arrests will be carried out after thorough analysis and deliberation.”
Among other things, SIPA has collected evidence on the murders of Ramiz Delalić Ćelo, Boris Govedarica, Vladimir Mačar, Milan Vlaškić and Rade Magazin and three attempts to murder Đorđe Ždrale.

Delalić was a war commander in the BiH army who was killed in an ambush in Sarajevo in 2007. Govedarica was also killed that year, in the East Sarajevo. He was previously acquitted of murder charges for killing husband and wife in Pale. Mačar, Magazin and Vlaškić died in Pale in a car blast in 2008. Mačar was previously arrested on several occasions.

Zubac said that SIPA has managed to collect substantial evidence about the criminal organization: it pinpointed its members, their habits and interests, as well as its associates within the authorities.

Zubac talked about other crimes that the organization is connected with. They included the intent to murder the undercover police officers, major robberies and loan-sharking.

All these crimes, said Zubac, were committed with the aim of acquiring huge material benefit and inciting fear among the ordinary citizens. He said that their actions could have had grave and unforeseeable repercussions on the state and its integrity.

Bellow you may find the footage of the arrest: