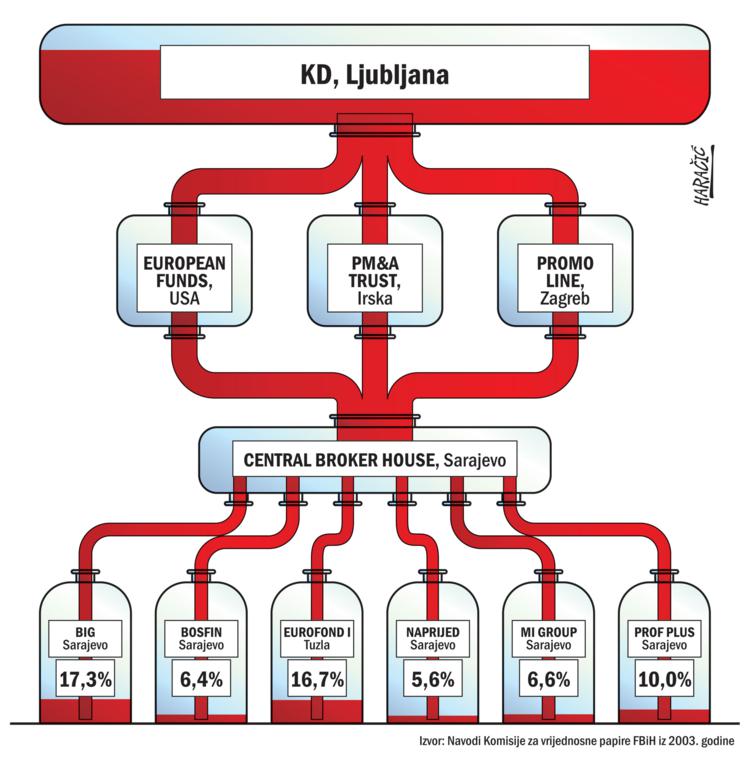 A Slovenian company gave FBiH Prime Minister Nedžad Branković a share in an investment fund’s management company with a market value of 120,000 KM. The Prime Minister, however, says he and other BiH businessmen were its victims. Branković and 44 other prominent Bosnians were given loans by KD Investments of Ljubljana, formerly known as Kmečka Družba, to invest in ABDS d.d. Sarajevo, the company that controls the largest investment fund in BiH. They say they are now being pushed out of the company.

‘If I knew that it will turn out like this, I would probably decide differently’ said Branković.

Still, the Prime Minister is about to introduce a law that will increase the percentage that investors are allowed to own of an investment fund from 5 percent to 25 percent. The move will allow KD to keep shares that the FBiH securities commission believes they might have bought illegally through a series of companies controlled by KD to hide their true ownership.

To understand how all this happened, it is necessary to look at the murky, often disastrous way BiH privatized its state assets. The resulting privatization has resulted in KD and other Slovenian firms owning more than half of the investments in the privatized shares of BiH state companies.

In 1997, the entity governments set out to privatize assets by giving BiH citizens vouchers with which they could share in the state wealth they had helped to create from decades of work in the former Yugoslavia. With vouchers they could buy apartments or invest in state companies. Twelve investment funds (called privatization investment funds or PIFs at the time) were set up, each controlled by a management company called a DUF. The investment funds would accept vouchers from citizens and invest them on their behalf in state companies. The DUF would choose which companies to buy and sell. To register, each DUF had to deposit 1 million KM in cash and collect 200 million KM in vouchers for its investment fund.

It was illegal to buy vouchers from others but a thriving market developed, with street hawkers buying vouchers at just a small fraction of their face value. With little information from politicians and the government, and with street buyers offering almost nothing for the vouchers, many residents sold them for a few hundred KM of quick cash. By far the most aggressive DUF was ABDS, which controlled the BIG – Investiciona Grupa d.d. Sarajevo. ABDS was set up by KD, which is controlled by Slovenian businessman Matijaž Gantar. Gantar, who had gotten rich buying up Slovenian assets during privatization, knew the value of BiH industry even if most politicians and the public did not. Conveniently for KD, the BiH system was modeled after the Slovenian privatization process.

KD signed up 45 leading BiH political, military and industrial leaders to hold a majority ownership of ABDS and to help get BiH citizens to invest vouchers in BIG. Along with a slick advertising campaign, KD offered a Bosnian friendly face at a time when people otherwise may not have invested in a Slovenian company.

The VIPs were given 53 percent of ABDS with KD and its managers owned the remaining shares. The VIPs did not actually have to pay to invest in ABDS. KD put up money for them in the form of low interest loans.

Muhamed Adanalić, head of the Informatics Sector at the FBiH Institute for Development and Programming, said he was talked into being an ABSD founder by a friend.

‘He called me on the phone and asked if I was interested to take part in a safe business. I said that I have no financial means to take part in any kind of business endeavors. He told me this was a unique opportunity, and you don’t need to invest even a single convertible mark, and good profit is guaranteed.’

Another beneficiary was Branković, who received a loan for an unknown amount to buy a 1.7 percent share in ABDS. Today, that share is worth 120,000 KM. Other recipients were Narcis Džumhur, the director of FBiH Railways, and Fadil Njemčević of Sarajevo Osiguranje.

Branković said he doesn’t remember much about the deal, including the loan amount.

In 2002, ABDS changed its policy to allow loans to be repaid using dividends from the funds with the company setting the amount of dividends. It is not clear how many of the VIPs had their debts relieved through these dividends.

According to the annual reports from the Slovenian company, about 500,000 KM was repaid in 2002. Branković claims that KD paid off some of his loan through dividends but he hasn’t asked ABDS how much.

He said that while he has an ownership share, he does not participate in the ABDS assembly that makes decisions for the company.

BIG successfully gathered 25 percent of all vouchers with the help of its VIPs. Branković helpfully told readers of Dani magazine in November of 2000 where he was investing.

‘I am one of the BIG’s founders and my vouchers will be invested in BIG, where a number of our businessmen have also invested’ he said at the time.

ABDS invested in many state companies, including those run by its investors: Energoinvest, where Branković was serving at the time as director, FBiH Railways and Sarajevo Osiguranje.

Once ABDS and BIG were successfully set up, KD began getting rid of the ‘owners’ from BiH. It bought out at least 10 of the original 45. KD now owns 59 percent of ABDS and controls another 10 percent through a related company.

Some of the VIPs said they were pressured through frequent phones calls to accept small amounts for their shares. Because they had accepted loans and the loans were not repaid, they could not sell the shares to anyone except KD, six of the VIPs told CIN. Branković said he is not happy with how it turned out.

‘I just aimed for the variant in which the majority of that association would be domestic. That’s why I joined that team’ said Branković. Salko Selimović, director of Feroelektro and a former ABSD shareholder said ABDS played games with the loans. He finally got out without making any money.

‘They told me that what they paid for us, we have to repay. I reached the conclusion that repaying the alleged loan will take forever, to eternity. We were always in debt for the same amount’ he said. ‘I dropped it because I couldn’t see the way out. They still didn’t pay me my share.’ Adanalić, like Branković and Džumhur, said they received offers to be bought out but refused.

The law allows ABDS to collect one percent of the BIG funds assets each year to manage the fund. In 2006, they collected 2 million KM from BIG for a profit of 1.7 million KM.

Behind KD’s success there are serious questions about their actions. KD started buying shares not only in ABDS but the BIG fund itself which soon totaled 5 percent. Under Bosnian law, no organization or person is allowed to own more than 5 percent of an investment fund. The rule was put in place to protect small investors from larger, more predatory investors.

But according to the FBiH Securities Commission, KD acquired more than the legal limit by purchasing shares through companies they controlled. The Securities Commission, in a criminal complaint filed with the Canton Sarajevo Prosecutor’s Office in 2003, claimed that KD orchestrated the purchase of up to 17 percent of BIG and large percentages in five other investment funds.

While the complaint still is awaiting action by prosecutors, Branković’s government is about to introduce a bill to raise the 5 percent barrier to IF ownership to 25 percent, making any illegal action by KD now legal.

The same KD Investment personnel involved in the share buying are also the target of another probe. They used a series of offshore companies in the Channel Islands, British Virgin Islands and other locations to trade BIG shares in a manner that raised suspicions at the FBiH securities commission. In 2004, the FBiH Office of Money Laundering submitted a criminal complaint to the Canton Sarajevo Prosecutor’s Office in Sarajevo

There are other problems with KD activities.

ABDS signed a contract in June of 2000 with a company called Tiga to set up a network of workers around FBiH to collect vouchers from citizens. Oddly, the contract requires Tiga not to tell people for whom they were collecting vouchers. Tiga earned a percentage of each voucher collected. The problem is that Tiga was not only not allowed to collect vouchers, it was a fictitious company, according to the securities commission. The commission also received numerous complaints from citizens saying they were misled and unaware they were investing in BIG.

According to documents obtained by the Center for Investigative Reporting in Sarajevo (CIN), there is no evidence that KD ever contributed the full 1 million KM deposit required by law to become a PIF. Many of the documents and interviews contradict each other. For instance, a document compiled by ABDS shows that they were short by 150,000 KM. Another document from Central Profit Bank shows it made the proper contributions — but this is signed in the name of Bank President Fehim Kapidžić who was one of the 45 VIPs.

In a letter to the CIN, the FBiH financial police confirmed that they are investigating ABDS. Meanwhile KD is among the largest owners of state assets.

Branković will likely benefit KD through another decision made recently. BIG owns more than 23 percent of the profitable Sarajevo Osiguranje. Branković’s government agreed to recapitalize that company. If the government cannot come up with the money for the recapitalization, its other private owners will be allowed to. However, in an unusual move, the new capital can only come from current owners and shares can be bought far below the market price, allowing current owners like BIG to grab a bigger share at below market prices.

Despite repeated requests for an interview, KD did not have anyone available to talk to CIN for this story.