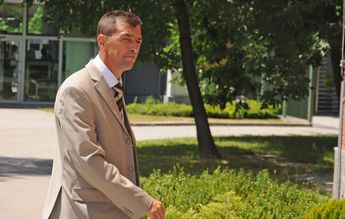 Nedžad Kurtović, the key witness in a case against Ramo Brkić et al. decided to continue testifying before the Court of Bosnia and Herzegovina (BiH), despite legal advice of his Bihać-based defense attorney Ilijas Midžić. A month ago, Kurtović talked at a hearing about his involvement in the production of narcotics for which he could be held criminally liable.

Kurtović cross-examined by defendants Senad Šabić, Satko Kekić and Husein Kasumović today. The three are charged with the manufacturing and trade in narcotics. Their examination probed Kurtović’s behavior, psychiatric treatment, addiction treatment and his earlier statements thy termed contradictory. During the cross-examination an argument broke between Kurtović and Šabić and the judge Hasija Mašović adjured the trial ten minutes later.

Asim Crnalić, the attorney of the first defendant Brkić, refused to question Kurtović, with an explanation that his witness status was not legal. Crnalić reasoned that a person whose status in the case has not been defined, i.e. whether he’s a defendant or has reached a plea agreement with the Prosecutor’s Office that gained him immunity from prosecution—cannot objectively testify.

Kurtović has been serving a 16 months sentence for the production and distribution of narcotics in Zenica prison. That sentence is unconnected with this case.

Attorney Slobodan Perić who represents Osman Vikić asked the Court of BiH to return his client the bail he had deposited saying that Vikić had no income as an unemployed person and he needed money to sent his children to school and autumn planting of seeds. Prosecutor Oleg Čavka accepted Perić’s motion with a comment that he might get the money but should abstain from “planting illegal stuff”. The Court of BiH will decide on this motion later.

The Court of BiH will separately try Emir and Enes Selimović because the Prosecutor’s Office made plea agreements with them.

Emir Selimović, former head of Bihać Police Station and a member of the Commission for the Selection of Police pleaded guilty to abuse of office and soliciting bribes for hiring candidates for a police job and accepting bribes from traffic law violators. Enes Selimović admitted to criminal offence of illegal interceding during the hiring procedure for police candidates in USK.

The State Prosecutor’s Office has reached thirteenth plea bargain agreements in the case against Brkić and 22 police officers, civil servants and individuals. They have been charged with organized crime, production and sale of narcotics, abuse of office and authority, illegal interceding, certifying with official seals documents containing false data, accepting gifts and other and other forms of gain, and forging of official documents.

The next hearing is going to take place on Oct. 10, when Jasmin Aldžić, Asim Mašić and Hasan Mušidić are to testify. The three are policemen whom Brkić allegedly suspended at Šabić’s request. Kurtović said during his testimony that Šabić conditioned his joining the drug production business upon the termination of the policemen who had once assaulted him. As Enver Okanović, who reached a plea agreement with the Prosecutor’s Office at the end of August will show as a witness, in connection with the case.