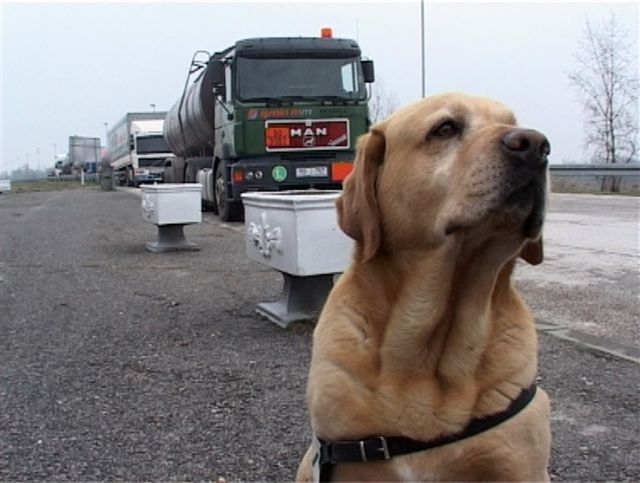 Vladimir Gačić, a Serbian citizen, watched wordlessly as a dog named Baki sniffed around his Caddy on the Pavlović Bridge into Bosnia and Herzegovina (BiH) from Serbia. The experience last March was surreal, Gačić said. He knew he wasn’t carrying any drugs, but he still felt a little nervous, almost guilty, as the dog moved around the small vehicle.

BiH Border Police began a dog training program in 2003 as one attempt to help find drugs and explosives coming into the country. Since 2006, all Border Police field offices have dogs. The guards were just showing what Baki can do when confronted with Gačić’s car. In reality, he and 13 other dogs are called out for duty when guards get a tip about smuggling or when they are performing a detailed inspection of a suspect’s vehicle.

The results have not been spectacular.

Omer Hasikić, a border guard and dog handler, said his dog has successfully rooted out smaller quantities of drugs, but has made no big haul. At 6 1/2, Baki is close to retirement. Most dogs work for about seven or eight years. None of the border dogs seems to have done better. The guards don’t keep exact data about the effectiveness of the animals, but police in most field offices say dogs there have had little success. In Bijeljina and Čapljina over the past three years, dogs have uncovered about 100 grams of marijuana, 18 grams of heroin, 13 ecstasy pills, 335 psychotropic pills and about 19 grams of hashish.

Dogs have the same kind of limits as human narcotics officers. They do well inspecting enclosed areas, vehicles and luggage, but they can’t smell drugs in the grass or placed in spaces high above their heads. They don’t inspect people, nor can they sniff out drugs that smugglers have swallowed or stuffed into body orifices. And scotch tape can stop them cold, sealing out the whiff of drugs from their sensitive noses.

‘The dog can search a large hall in maximum five minutes, with 90 percent probability that it will find drugs if its there. On the other hand, not even 20 policemen can search the same area in less than three hours’ said Senad Franca, a senior inspector at the BiH Border Police. He works at the Sarajevo airport and is in charge of dog procurement.

He says he buys dogs older than 6 months, mostly untrained or just with basic training. He prefers Labrador terriers, Malinoas or German shepherds. Franca says that Labrador terriers work hard, but some are stubborn. Dogs can cost as much as 2,500 KM, but once trained, exceptional dogs may be worth much more. The British embassy donated 21 dogs to BiH Border Police originally, six of whom were dedicated to drug hunting.

But dogs, even those that are valuable and highly trained, cannot compete with some of the slick methods of drug smugglers.

Cvjetin Marić, former head of the Narcotics Department of the Canton Sarajevo Ministry of Interior (KS MUP), explained that men can bring in small concentrated samples of nearly pure heroin, hiding it in body orifices or swallowing it in balloons. Once it’s inside the country it can be mixed with various additives like paracetamol and to make as much as 10 kilos of saleable drugs.

Marić said the only recourse his guards have is to nab people who look unusually nervous or fearful and hold them until they excrete the drugs.

The Center for Investigative Reporting in Sarajevo (CIN) watched the March demonstration as Baki tried to search a vehicle for drugs but was thrown off by air streaming through an open window and doors. The dog signaled its handler that he had found narcotics, but it was difficult for him to pinpoint the hidden location.

Jovan Pantić who handles a 2 1/2-year-old dog he calls Mrki (dark) says the animal is motivated by a ball he gets as an award after every successful detection. It took Mrki just a few minutes to find both marijuana and ecstasy in five or six trucks lined up in the airport hall during a recent demonstration for CIN.

BiH is hardly alone in the use of dogs at its borders. Croatia plans to open a center for training police dogs soon. Like BiH, Croatia does not use dogs at all its border crossing points. BiH has 89 official crossing points, while Croatia has 177.

‘We do it according to our estimates. So nobody can ever know where the dogs are going to be. When we get a tip, we act upon it. Sometimes we do it in prevention’ said head of the Border Protection Department of the Croatian MUP.

But Enes Gačanin, head of the Central Investigation Office of the BiH Border Police, admitted: ‘It is a great illusion and misconception if somebody thinks that the dogs will solve the problem of narcotics crossing the border.’