Unlike its neighbors, Bosnia and Herzegovina allows convicts to buy out their sentences. So, some Serbian and Croatian convicts who hold Bosnian citizenship come here to avoid prison. 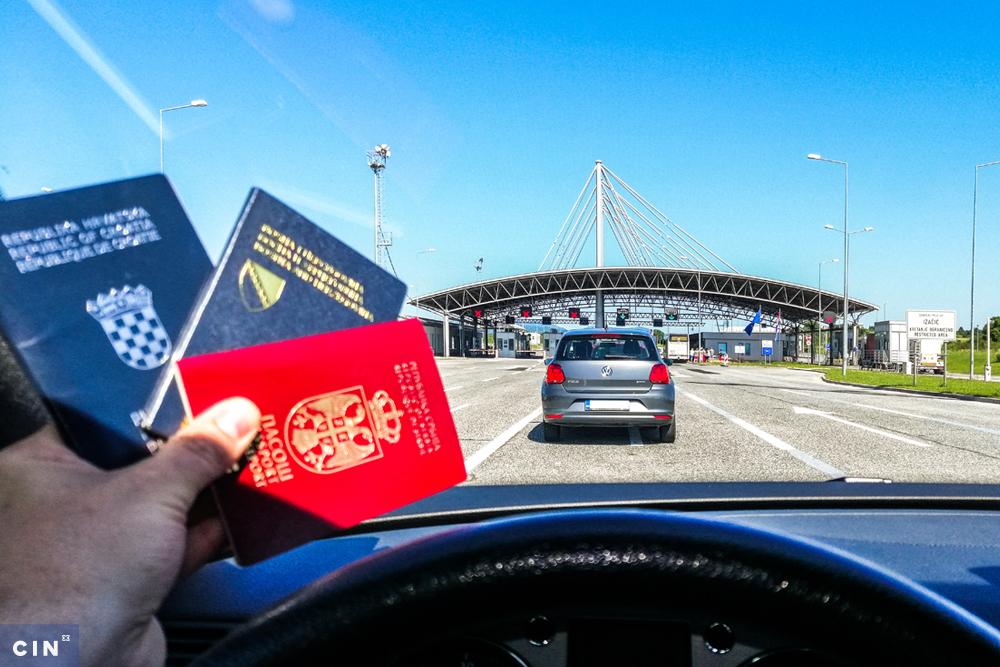 Mirsad Zulić has lived in neighboring Croatia for five decades, but never renounced his Bosnian citizenship. That paid off for him last year.

He was sentenced to 12 months in prison in Croatia on tax evasion charges. Citing his dual citizenship, he requested transfer of the judgment to his native Bosnia and Herzegovina (BiH), where instead of serving any time, he bought out his prison sentence for 36,500 KM.

Zulić is one of at least 10 people known to have used their Bosnian citizenship over the past five years to avoid serving time for crimes they were convicted of in Croatia or Serbia. The courts allowed them to buy nine years’ worth of prison time for 219,000 KM, according to findings of the Center for Investigative Reporting in Sarajevo (CIN). In those countries, unlike in BiH, convicts have no avenue to getting prison time commuted into a fine.

Two convicts came from Serbia where judicial authorities don’t object to the practice, unlike Croatia from where other convicts have come from. According to Croatian authorities, BiH isn’t honoring the Treaty on Enforcement of Criminal Judgments or the standards for the transfer of convicts – which do not allow prison sentences to be exchanged for money.

Thus, Croatia disregarded the BiH practice of commuting prison sentences into money and continued to pursue some convicts. One was sent to prison while an arrest warrant is out for another. As for Zulić, Croatia sent police officers to his home address to bring him in at the beginning of October.

In mid-2017, Zulić and his wife Emina were convicted of commercial crimes by an appeal court in Bjelovar, Croatia. According to the verdict, the pair used their firms, Trio Team Properties and Team Club, to evade paying around 260,000 KM in taxes.

Her conviction resulted in a one-year suspended sentence and the obligation to pay their debt, while Zulić received a 12-month prison sentence. He asked to serve his time in BiH.

In a telephone conversation with CIN, Zulić said that he didn’t originally intend to exchange prison time for a fine. “When they punished me, I asked primarily to serve the sentence there,” said Zulić. “However, it so happened that I was allowed to pay.”

His case was referred to the Cantonal Court in Bihać where Zulić hails from. The Croatian Ministry of Justice accepted this on condition that his prison sentence not be commuted into fine.

The Court in Bihać accepted the Croatian judgment but then approved Zulić’s motion to commute his prison sentence into a fine.

“I have been living in Croatia for 50 years, but I never wanted to give up on my Bosnian citizenship and, lo and behold, that paid off for me,” said Zulić. He had liquidated his firms, but he has not paid his tax debt to Croatia.

Nikola Sladoje, assistant minister of the BiH Ministry of Justice, said that this shouldn’t have happened because it’s against the international conventions. He referred to the European Convention on the Transfer of Sentenced Persons that reads “the administering state shall not convert a sanction involving deprivation of liberty to a pecuniary sanction.”

In a treaty BiH signed with Croatia, exchange of prison time for money is not even mentioned. It says only that punishment is meted out according to the laws of the administering state. However, judges have discretion to change punishment at the convict’s request under Bosnian law.

Suada Kasum, a judge of the Cantonal Court in Bihać who was in charge of Zulić’s case, said she did nothing wrong and abided by the Federation of BiH (FBiH) Penal Code which makes it possible to commute prison sentences into fines.

Kasum said that Zulić was not pardoned. She said that Croatia has no grounds to set conditions while referring cases.

“If there are (grounds), I’m ready to go to jail, said Kasum. Still, before she decided on Zulić’s request, she turned to BiH institutions with a plea to inform Croatia about the local justice system and to confirm whether it was ready to drop its demands. Croatia remained steadfast, yet the judge granted the motion from Zulić’s lawyer in 2018. “The FBiH law does not give me grounds to turn him down,” she said.

After Croatia was notified that Zulić converted his punishment into money in his native country, it informed the BiH Ministry of Justice that it did not consider the judgment valid.

“For them Zulić is a person who has not served his prison sentence,” says Sladoje.

CIN found that Croatian Ministry of Justice informed the Cantonal Court in Zagreb that it did accept the BiH judgment and the court issued an arrest warrant after Zulić. If the police do not find him in Croatia, it may issue an international arrest warrant. Zulić told reporters by phone that he intends to start a new business in Germany.

Croatian justice officials wrote to CIN that such cases have happened in the past. That’s why from 2014 onwards, Croatian judicial officials started adding a note to referred cases that prison sentence cannot be commuted into fines. The ministry did not have the complete statistics about the number of such cases, but their guestimate was that there were around 20.

“In most of the cases, these persons continue to be unavailable to Croatian law enforcement agencies because they are in BiH,” wrote Croatian justice officials.

Corrupt Public Officials Buy Freedom Cheaply
Those sentenced to short prison sentences in BiH can buy their way out. Corrupt officials and others have been quick to do this then return to jobs where they broke the law in the first place.

Croatian judicial authorities have accepted five out of seven judgments involving exchange of prison sentences for money in BiH over the past five years, according to CIN’s investigation. One convict was sent to prison and there’s an arrest warrant for another. Croatian authorities did not want to explain why cases were treated differently.

Address to Kill For

Serbia also has no option to commute a prison sentence into a fine, but it doesn’t make an issue out of the fact that its convicts in BiH do just that. According to its interpretation of a bilateral Treaty on Enforcement of Criminal Judgments in force for nearly 15 years, BiH is free to execute sentences in line with its own laws.

Serbian justice ministry officials did not have statistics on those cases because they were only occasionally informed when their verdicts were accepted in BiH, and not on how they were executed.

Penal codes at all levels in BiH provide for exchanging prison time for money. The provisions are not harmonized across the country.

The codes in the FBiH, Brčko District, and at the state level stipulate that convictions of up to 12 months may be commuted into fines at the convict’s request. While the FBiH and Brčko codes have calculated a day in prison to be worth 100 KM, the Court of BiH may lower the price of prison time depending on the convict’s income.

After a new Penal Code was instituted in the RS in 2017, the possibility of commuting a sentence into fine was abolished in this entity. However, conversions are still possible for convictions of up to six months for crimes committed before adoption of the new code.

CIN learned about two convicts who had asked for their cases to be transferred to the Basic Court of Brčko District, BiH over the past five years. Dušan Bokan, sentenced for fraud to six months in prison by a Belgrade court in April 2016, was one of them. Along with several other persons he falsely reported traffic accidents in order to collect insurance money.

He had a company in Novi Sad, a branch office in Sarajevo, and also owns firms Omorika-Recycling and Omorika-P.E.T in Doboj. Bokan was domiciled in Brčko so his case was referred to a court in that town.

This was a safe bet because in the district, as well as at the FBiH and the BiH level, judges are obliged to accept a convict’s motion to have his or her sentence converted. In Republika Srpska, a judge has discretion to accept the motion only for sentences of up to six months and for criminal offenses that took place before the summer of 2017 when this provision was abolished.

At the end of 2017, the Basic Court in Brčko accepted a ruling by the Appeal Court in Belgrade on Bokan. Soon after it granted Bokan’s motion to have his sentence commuted to a fine. He paid 18,000 KM to the court while the insurance company that he had defrauded got no restitution.

The president of the Basic Court in Brčko District, Jadranko Grčević, said that the court did not check if the convict resided at the place he had reported as his domicile.

“Guess what? If we were to check if a convict really lived where he was domiciled, we’d never have brought a case,” said Grčević.

Public Registry officials refused to furnish CIN with information on whether Bokan still resided on his Brčko address or if he used it only until he’d bought out his sentence.

Bokan is avoiding reporters, while his attorney Petko Budiša says that he did not know where his client was. He said that the case was closed, the fine paid.

“This is how (government’s) coffers gets filled. He paid!” said the attorney. “He has paid off his debt.” 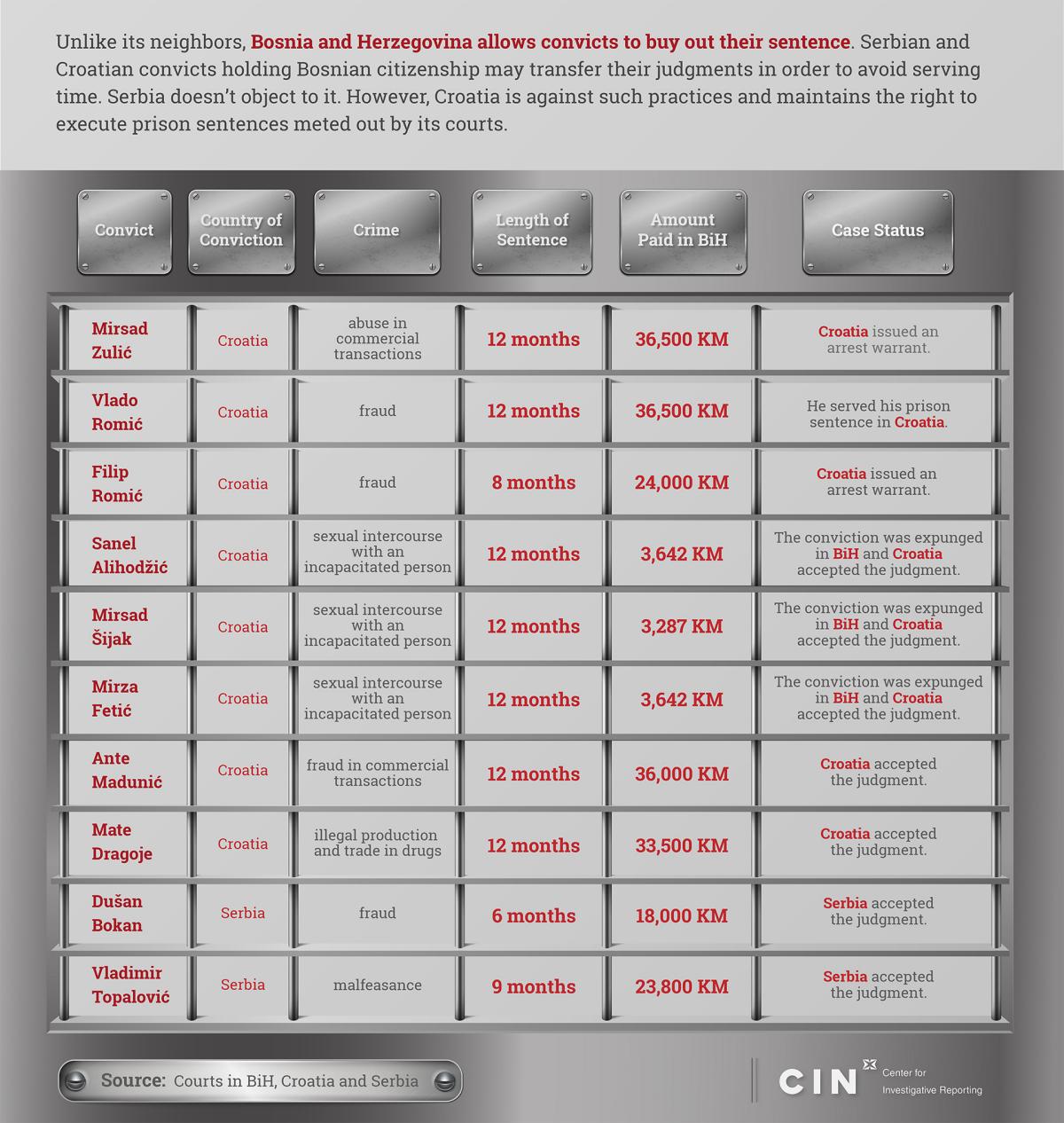