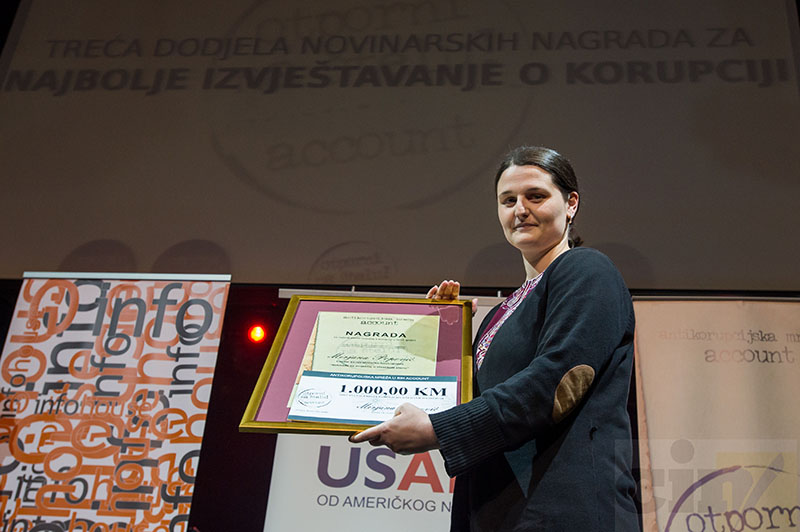 Reporter Mirjana Popović won honors for the best corruption reporting in 2014 from the Anti-Corruption Network in Bosnia and Herzegovina (ACCOUNT) in Sarajevo.

Popović, working for the Center for Investigative Reporting in Sarajevo, exposed four ministers in the FBiH government who received allowances in a town where they owned an apartment. CIN revealed in “Allowance for Accommodation in One’s Own Apartment” that 13 FBiH ministers have collected in accommodation allowance and the costs of living away from home around 226,000 KM of taxpayer money in nearly four years. No one checks if ministers really rent apartments for which they receive allowances; if they live in them or if they really live away from their homes.

This year 24 nominations were submitted – 18 for video programs, five print stories and one radio. ACCOUNT’s jury that looked at the nominations to receive its third award was made up of long-time journalists and editors: Siniša Vukelić, Aldin Arnautović, Zoran Ćatić, Štefica Galić and Ozren Kebo.

ACCOUNT’s director Eldin Karić said during the ceremony that there was no laureate for radio journalism award and that he hoped that more quality nominations next year would ensure a winner.

Seven days ago, Popović won second award of the European Union for Investigative Reporting in BiH for the same story.