A former director of the Public Institution Clinics of Sarajevo Canton hired friends and the relatives of colleagues for years without authorization.

Slobodan Trninić, a former director of the Sarajevo Canton Public Clinic, hired nearly 600 people without following any set procedure between 2007 and 2010. Among them were friends, relatives of Board members, and the children of long-term employees.

Reporters from the Center for Investigative Reporting in Sarajevo (CIN) got in touch with these employees and learned that they got a job by sending in applications without waiting for any job openings to be posted. CIN also found many job applicants who spent years waiting in vain to get hired despite doing the same.

During these years, the cantonal government had issued a decree that no new hiring could proceed without the prior approval from the Cantonal Health Ministry.

Because he hired outside the approved system, the director had to find ways to finance the salaries of new hires. So he allocated 16.3 million KM from the budget line used for buying medical material and from the clinic’s own revenue.

The Sarajevo Canton Prosecutor’s Office has been investigating this case for the past four years. The Federation of Bosnia and Herzegovina (FBiH) Police Bureau launched an investigation against Trinić and four colleagues at the end of 2009, prompted by a complaint of illegal hiring from a group of citizens.

Trninić led the clinic for 10 years in which he and his family came into possession of valuable property. The clinic is the biggest primary health care institution in BiH with nine municipal and 78 outpatient clinics under its umbrella.

The police bureau alleged that Trninić neglected to report the need for new employees to the Canton’s Employment Fund that is tasked with putting out vacancies. But, he was not alone. The clinic’s management passed a new rulebook that gave the director a free hand to hire without vacancies.

In January 2005, senior physiotherapist Samir Konjhodžić submitted a job application to the clinic. Five months later, Trninić replied saying that Konjhodžić was put on the “priority list” and that he would be contacted when the need arose.

Konjhodžić never received that call. According to records CIN has obtained, Trninić hired a physiotherapist and 55 physiotherapy workers with secondary education through the four years.

Konjhodžić said the he was prepared to do work below his qualification. “It was of utmost importance for me to get a job.”

In March 2009, he wrote to Trninić again, reminding him of his application. Two days later, Konjodžić was told that there was no new openings at the clinic and that this was the fault of the Health Care Fund. 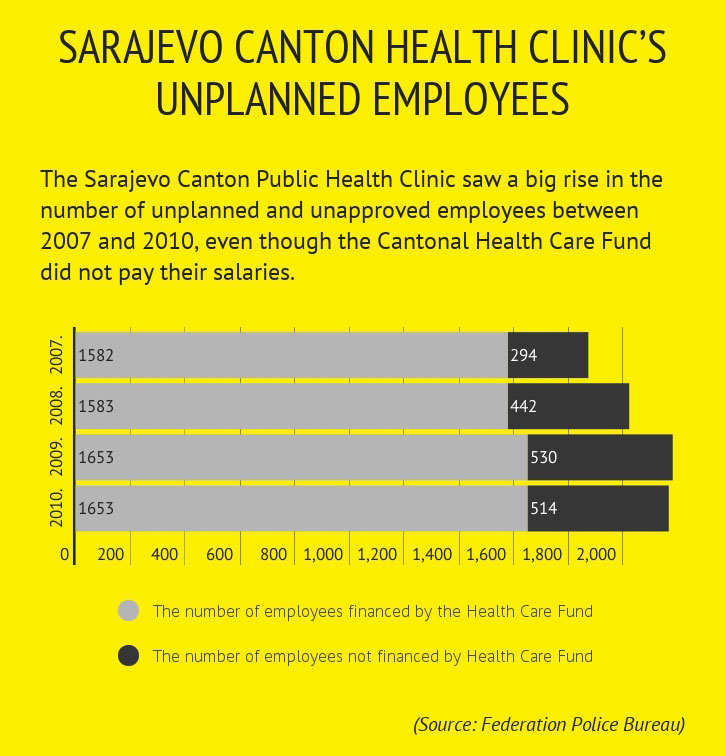 Every year the Fund passed a financial plan that showed how many clinic employees it could pay for. The number for 2009 equaled that of the previous year.

Despite that, Trninić hired 211 new workers.

She is a blood transfusion specialist and until then she had worked at the FBiH Bureau for Blood Transfusion Medicine as head of the blood lab. In the fall of 2008, the bureau filed a complaint with the Cantonal Prosecutor’s Office alleging that she had tampered with patients’ blood type records.

In January 2009, Kapetanović stopped working at the transfusion department at her own request and found a job with the Center Municipal Clinic. After additional training, she stayed there as a family doctor until retiring. Asked by CIN how she got the clinic job she said: “I don’t know. My husband submitted the documents.”

She said that Osman Kapetanović did not know Trninić. They were both physicians and peers, Kapetanović said. He did not want to comment about whether this helped in hiring his wife.

“Acquaintances are private,” he said.

In March 2015, the Cantonal Prosecutor’s Office dropped the investigation against Svjetlana Kapetanović because evidence had been obtained without court approval, rendering it illegitimate. Disciplinary proceedings against her had not been launched before the Medical Association. The department’s officials say they don’t know why.

CIN found that Trninić also hired at least six friends or children of long-term employees and board members.

One is Dr Mahira Kukavica-Durić, daughter of Fadila Kukavica, the retired doctor who worked in Stari Grad municipal clinic. Kukavica said that employees’ children had priority at the time when her daughter applied.

“Listen, it is realistic and logical,” she said adding: “I have a very high opinion of Mr. Trninić because he always had in his mind to help our children, above all.”

Kukavica said that her daughter had extraordinarily high grades, that no one pleaded for her job and that this was simply “some crazy luck.”

Apart from the fact that she’s a daughter of an employee, Mahira is also the daughter-in-law of Amira Durić, president of the clinic’s Board of Directors between 2005 and 2009. Durić denies pulling strings for her daughter-in-law.

Mahira Kukavica-Durić stopped working in Stari Grad Clinic in 2010 and has not responded to reporters’ calls for interviews.

Under the clinic’s Articles of Association, a director general answers for his or her work to board members who decide about appointment and termination of the director, pending approval of the Cantonal Minister of Health.

Ferid Selmanović was a board member along with Durić. His son Mirsel, who holds a B.A. in economics, works in the clinic’s purchasing department.

Neither of the Selmanovićs wanted to talk to CIN.

Jobs also went to two children of Fata Mujan, a technical secretary for more than 35 years at the clinic. Since 2007, her daughter Anela has worked as an assistant physiotherapist and her son Alen as a clerk. Mujan says her children just brought documents to the clinic and submitted them.

“I did not pull any strings. But, of course, when they brought documents upstairs, they knew they were my kids. Was I privileged because of it? “ said Mujan.

Unlike her, Dr. Izet Hočko, the clinic’s union president said that he asked Trninić to find his son a job. He was disappointed he had to wait 10 months for his son to get a job as lab technician at the Novi Grad Clinic.

“I think I managed to push for this just because of my persistence. I am a specialist, I am an aged doctor, I have been with the institution for a long time and I have done a lot for it,” he says.

The employment procedure went like this: a candidate would send his application to Trninić who would do an interview first and then go to human resources for information about the opening. The candidate would sign a short-term contract and then after some time would get tenure. The whole procedure from submitting application to signing a contract might take only a few days.

The Cantonal ordinance that called for approval of Ministry of Health pending any new vacancies was in force at a time when Trninić did the hiring. CIN tried to get records how many new employees were approved, but neither the ministry nor the Clinic’s administration had the paperwork.

By the end of 2010, after four years of illegal hiring, the clinics were supporting 514 employees who were not paid by the Health Fund. Every year, Trninić used money from the clinic’s revenue and from money set aside for procurement of syringes, gauze and dressings as well as from money to pay for utilities. This led to patients receiving inadequate health care.

Nowadays, the clinics lacks mostly x-ray experts; eye, ear, nose and throat specialists and neuropsychiatrists. According to the list of employees obtained by CIN, out of 587 people Trninić hired, just one is a neuropsychiatrist. On the other hand, among those hired are five salespersons, two textile tradesmen, two arrangers, two cooks, an agricultural tradesman, a cake tradesman, flower tradesman, upholsterer, a teacher etc.

The citizens’ complaint lodged with the bureau talks about how bribes were solicited to hire “some of the new workers” and that Trninić’s relatives own properties worth more than 400,000 KM on the market.

Even though union reps say that they heard from their colleagues that they had to pay to get a job, CIN talked with at least 15 employees who said no one asked them for money in exchange for jobs.

“I am surrounded by people who say that they gave money, but no one wants to talk – not only because they are afraid, but because they participated in the crime,” said the Union President Hočko.

According to records CIN has obtained, Trninić and his family owned valuable property dating to time when he was at the head of the clinics, between 2001 and 2011. In 2002, his son Slobodan, at that time a student, bought a 73-square-meter apartment in downtown Sarajevo for 107,500 KM, and eight years later a garage in the same street worth 30,000 KM.

Not far from them, Trninić has an apartment of 144 square meters. In 2007, he bought occupancy rights from the Center Borough with government-issued vouchers for more than 23,000 KM. Together with his wife, he owns a 1,000 square meters of land in Blažuj which they bought in 2000 for 6,000 KM. Meanwhile, a chalet with a big courtyard has been built there.

Trninić refused to talk with CIN. Through his wife he said he did not want to give anyone answers. During the investigation, he said in a statement that he did not feel guilty and that he did everything in line with the law. According to the Bureau’s report, he indirectly admitted to hiring employees without informing the Sarajevo Canton Employment Fund, just on the basis of job applications. He also said that he did not receive approval from the Cantonal Ministry of Health to hire new workers.

In 2012, his case was referred to the Cantonal Prosecutor’s Office. According to the office, the case is still in the investigative phase.