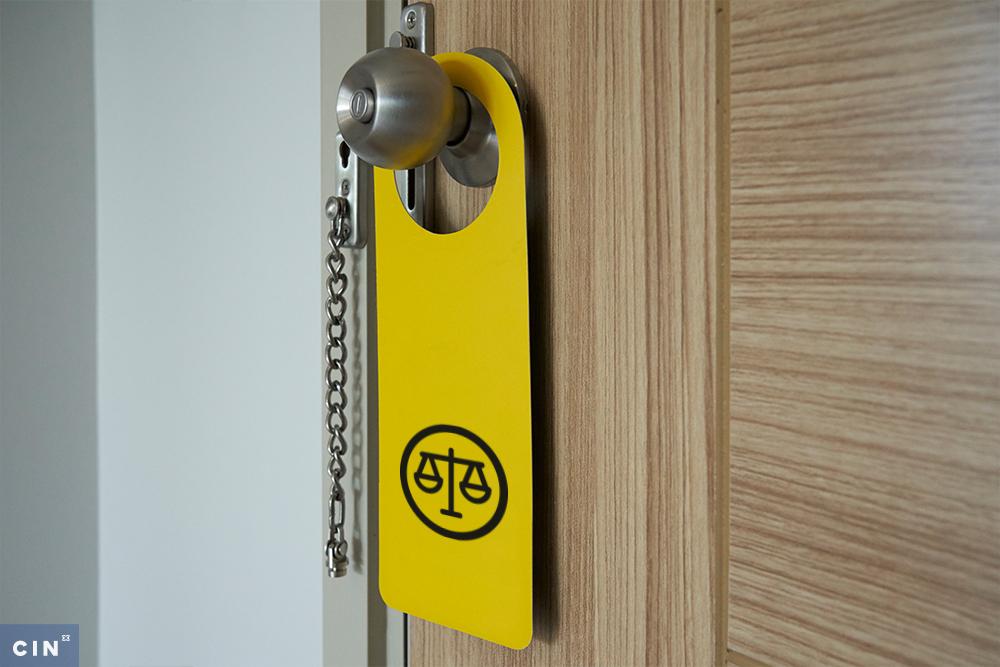 The Tuzla Cantonal government may soon lose three apartments in Lukavac it purchased some twenty years ago. At that time, the apartments were allocated to local judges. It all began when Nisad Omerović, the president of the Municipal Court in Lukavac, arranged the purchase behind the scenes. Although the Cantonal government paid for them, it has never used them as Omerović and his former colleagues Goran Nezirović and Enver Ćosićkić took occupancy of the flats from the get go. Omerović and Ćosićkić now work as attorneys while Nezirović is a judge at the Supreme Court of the Federation of Bosnia and Herzegovina (FBiH) and a member of the High Judicial and Prosecutorial Council (HJPC).

Law enforcement and judicial authorities that investigated the purchase were not in a hurry to bring the case to an end. Omerović was sentenced to probation on abuse of office charges, but the statute of limitations expired before the case made it to an appeal court.

“It looks like I got what I deserved: a probation and a fine,” Omerović told reporters from the Center for Investigative Reporting (CIN) in Sarajevo. “I don’t. I deserve to be rewarded.”

The Tuzla Cantonal government has never reclaimed the flats and the former Lukavac judges stand a chance to become the flats’ owners in 2022.

In 1998, a condominium building nicknamed Esmeralda was built in Ratka Perića street in Lukavac. Omerović decided that the Court should take out a loan of over 316,000 KM to buy four condos in the Esmeralda. He planned to make the loan payments by unlawfully using money obtained from court taxes, and he did this without gaining the approval of the Cantonal government.

Omerović allocated the flats he paid with the Cantonal budget money to judges: Nezirović, his deputy Ćosićkić and Sulejman Hasanović. His deputy signed off on a decision that handed Omerović the fourth flat.

Omerović said that he did this to keep the judges from leaving the Court.

“I made up my mind: I will make the purchase and let them remove me from office,” said Omerović. “I would leave the court knowing that at the very least I did something good for this country. All the judges would remain at the Court except for me.”

However, this plan would not come to pass. Soon after the flats were dished out, the Court found itself in dire straits. First, it had no money left so the government took over the loan payments. Then, as a result of judicial reforms, the court was disbanded. By the time the Court reopened again, all its judges had found other jobs. However, only Hasanović returned his flat when he opened his law practice.

“I thought that it was an honorable and honest thing to give it back,” Hasanović told CIN. “It didn’t belong to me anymore.”

Nezirović continued his career as a judge at the Tuzla Cantonal Court, while Omerović and Ćosićkić had to forgo their judicial offices after the Independent Judicial Commission put them under scrutiny. In the beginning of 2000, the Office of the High Representative in BiH provided the Commission with a comprehensive mandate to enforce high standards of ethics and professionalism in reformed institutions. The commission held Omerović and Ćosićkić accountable for the purchase and allocation of the apartments and removed them from office. They found new jobs but kept the flats.

Two years later, the Cantonal Prime Minister, Enes Mujić, ordered the Attorney General’s office to launch eviction proceedings to prevent these former judges from acquiring ownership of the apartments. Mujić says now that he cannot recall the details of the case.

The Attorney General did what the government had asked her to do. She filed a lawsuit against Ćosićkić, Omerović and Nezirović for illegally using the flats and sought them to be returned to the Canton. After seven years of litigation, the government lost the case because the Municipal and Cantonal Court in Tuzla established that this was not the case of illegal use.

Despite the fact that the Canton has ownership of all of the apartments, the Government has so far been able to assert its rights only with the flat that former judge Hasanović returned voluntarily. In 2015, the government allocated this apartment for use to a disabled veteran, Dalija Bajrić.

The Cantonal Attorney General’s lawsuit was not the only court proceedings involving the controversial flats.

Way back in 2005, the Tuzla Cantonal Prosecutor’s Office accused the former Court President Omerović of using money from court fees to pay back the loan with which he had bought apartments for himself and other judges. Because the court fees were not deposited into the Tuzla Cantonal government budget, as required by law, the prosecutors charged him with abuse of office.

Omerović said that he was not guilty and that the Canton had not been damaged because the flats anyway belonged to the government. However, after a four-year trial, judge Alma Mulabdić begged to differ, and she sentenced Omerović to six months’ probation. When asked about the case details, Mulabdić couldn’t recall them and said that there were few judges and lots of cases at the time.

Both Omerović and the prosecutors appealed to the Cantonal Court in Tuzla: the former asked to be acquitted, while the latter asked for a more severe penalty for the former court president.

However, the time to deliberate on the appeals ran out. Judge Mulabdić’s ruling was handed down about the time when the statute of limitations was going to expire and the Cantonal Court judges did not have time to deliberate on whether Omerović was guilty. By the time the case reached them, it had already been ten years since the criminal offence had been committed. The only thing for them to do was to throw the case out.

“The statute of limitations in criminal cases had expired even before the appeal was delivered to be adjudicated,” said Indira Hadžimehmedović, the president of the Cantonal Court in Tuzla.

None of the judges who were involved in Omerović’s trial has ever been disciplined. At the time, courts’ presidents were not obliged to report to the HJPC those cases in which the statute of limitations had expired. Only later the HJPC ordered such cases to be monitored and reported so that the Office of the Disciplinary Prosecutor could investigate the possible responsibility of judges. The Office’s officials told CIN that they could not investigate the case now because the statute of limitations had expired.

Meanwhile, the former Lukavac judges took up different career paths, often for the better. Nezirović has made it to the Supreme Court of FBiH and has been the HJPC’s member for eight years now. Omerović left the court in Lukavac to open his private practice, while Ćosićkić spent much of his career as the manager of the Utility Enterprise “Spreča”, and in 2016 opened his own law office in Tuzla.

Over these years they acquired even more properties.

After moving to Sarajevo, judge Nezirović took out a loan and bought a condo in the capital. He said that because of the Lukavac flat he had forgone to privatize his prewar flat in Bosanski Šamac.

“In the end I’m disgusted with all this, I don’t care what’ll come out of it,” said Nezirović. He added that the case of the Lukavac flats was used to smear his professional career.

Omerović still resides in the flat paid with the court fees. Meanwhile, he inherited his parent’s house and bought a condo in Sarajevo. He said he offered to buy the Lukavac flat from the Tuzla Cantonal Government, but they have ignored his offer.

“I offered to buy it out,” said Omerović. “I’m making a point here in order to keep at least a little bit of dignity”.

Attorney General Alihodžić told CIN that she has information that attorney Ćosićkić bought a condo in Tuzla, but he refused to talk about it on the record.

During the trial, no one contended that the Lukavac flats were paid with taxpayer money. Omerović, Ćosićkić and Nezirović asked for permission to buy off the flats, but the courts denied their motions. The Cantonal Court in Tuzla and the FBiH Supreme Court explained that the judges lost the right to that avenue because those legal provisions had been abolished. The courts also established that the former judges failed to file those motions in time which disqualified them from doing it now.

Nezirović, Omerović and Ćosićkić appealed to the Constitutional Court of BiH, but regardless of its ruling, they will soon be entitled to another remedy that might allow them to become the flats’ owners. In the beginning of 2022, they will have an opportunity to cite the FBiH Law on Real Rights and request that real property is titled in their name after having occupied the property for over 20 years. That would officially seal the fate of Tuzla Canton’s case to regain flats paid with taxpayer money. 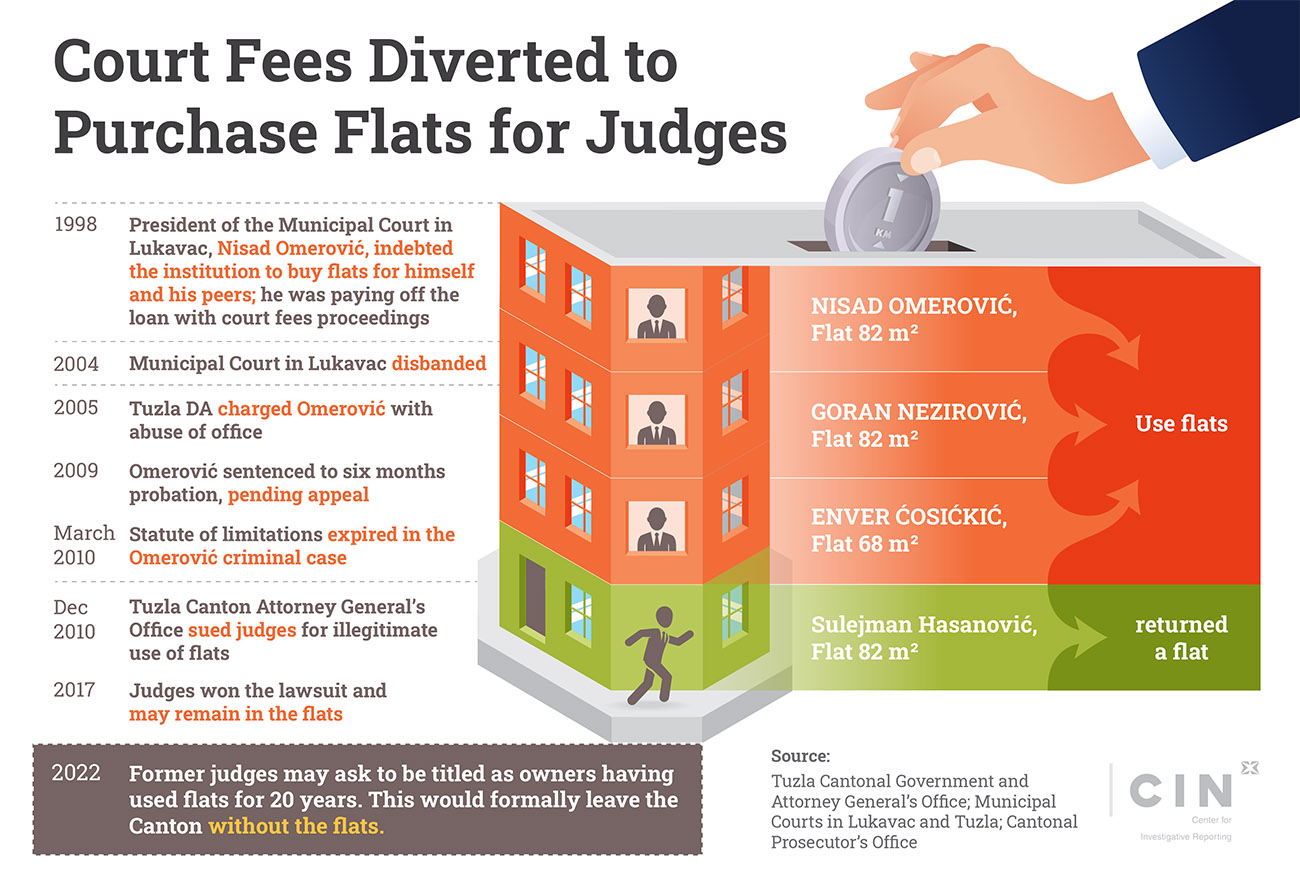