Fishy Transactions from Russia via Sberbank

Certain money used for the 2013 acquisition of Bosnalijek shares, through a Sarajevo-branch of Sberbank, was of questionable provenance. 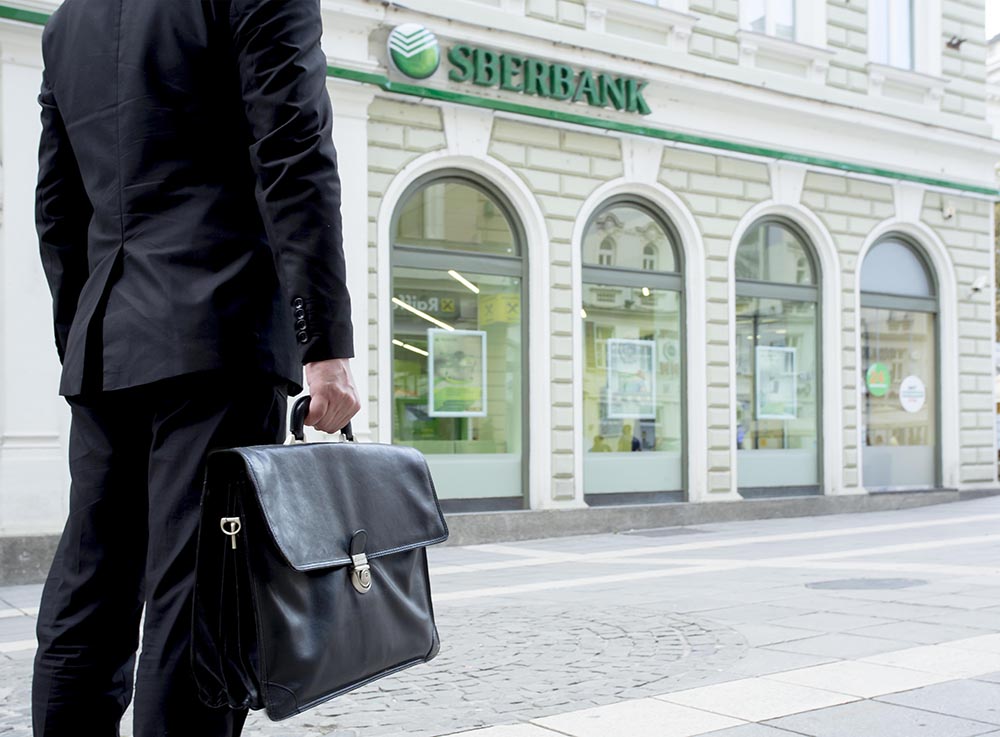 In a series of complicated transactions, the money left Russia for Luxembourg before arriving to a Sberbank account in BiH in January 2013. This account was used to finance a buyout of Sarajevo-based Bosnalijek, one of the biggest generic drug makers in the Balkans.

Sberbank’s management did not report this transaction to its own Department for Combating Money Laundering and the Financing of Terrorism. It also failed to report it to the Financial and Intelligence Department of the State Investigative and Protection Agency in BiH (SIPA). In this manner it violated several banking laws according to a report by the Banking Agency of the Federation BiH and an investigation by the BiH Prosecutor’s Office.

Not long after, Sberbank gave a 7.8 million KM loan to the Luxembourg offshore fund to cover the costs of trading Bosnalijek’s shares. In this case, it again failed to conduct due diligence according to banking laws and regulations on combating money laundering and financing of terrorism activities in FBiH.

After the FBiH Banking Agency uncovered the questionable transactions and failures in the loan procedure, it filed a criminal complaint against Sberbank and ordered its management to close loopholes and report to SIPA how millions had gone through its accounts, without following the required procedures.  Even though the bank had paid a fine and followed up on the Agency’s request, the money had already been spent. Meanwhile, a Russian pharmaceutical company Imperia Pharma that was behind the dubious transactions had acquired the majority stake in Bosnalijek. 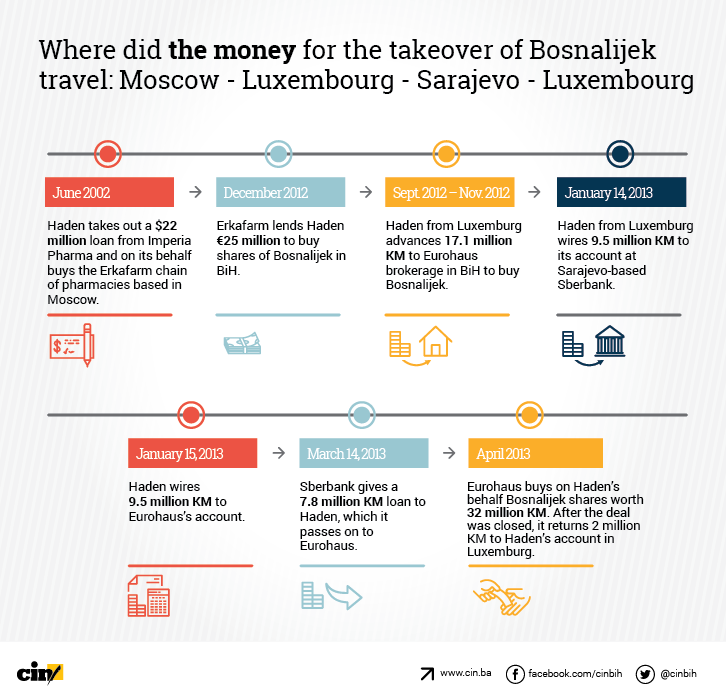 In mid-October 2013, having inspected Sarajevo Sberbank’s financial books, the Banking Agency of FBiH decided to look into the circumstances surrounding Haden’s transactions and found that the bank’s client from Luxembourg was determined to be of high risk.

The Center for Investigative Reporting in Sarajevo (CIN) wrote in an earlier published investigation that Haden acted only as Imperia Pharma’s proxy in the campaign to takeover Bosnalijek during 2012 and 2013. The money which the shares were bought with was sent from Russia to a Haden account in the Banque de Luxembourg. The Sarajevo-based brokerage Eurohaus received 34 million KM in total to buy these shares. More than half of the sum was sent to Eurohaus’s account directly from Luxembourg. The reminder was also sent from this European offshore zone via Sberbank’s accounts or through the loan. After the takeover of the company’s Sarajevo factory, the new owners arranged a huge shipment of drugs to Russia. In the process they defaulted on as much debt to Bosnalijek as they had put down for its acquisition.

BiH prosecutors have been investigating the case for nearly two years following leads that concern complaints about money laundering related to the acquisition of the firm’s shares and other abuses during the takeover. Government officials and company managers from both BiH and Russia have been under investigation. Part of the investigation is looking into cash flow including transfers worth millions and loans given out by Sberbank.  Despite evidence of illegalities, the Prosecutor’s Office has not yet filed indictments against those suspected of responsibility.

The inspectors from the FBiH Banking Agency established that Sberbank failed to classify Haden as a high-risk client and thus it circumvented its due-diligences duties.

The Agency also found that the Bank allowed Haden to wire large amounts without first establishing the firm’s real beneficial owners. The Bank failed to initiate a probe, even though this was a company that did not have an HQ or a stamp in BiH. Furthermore, since its incorporation in 1996, Haden did little in its chosen line of work, which should have raised questions. In the years before it opened an account in BiH, the firm had been operating with a loss larger than its equity. Despite all of this, the bank allowed the money to be transferred through Haden’s account without stating the purpose of the transaction, which was yet another breach of the Law on Combating Money Laundering and the Financing of Terrorism Activities.

The Head of Office for Combating Money Laundering and the Financing of Terrorism at the Banking Agency of FBiH, Ibrahim Sinanović, told CIN that everything pointed to the transaction being questionable and that the bank was obliged to temporarily prohibit the transaction and report to SIPA about it.

If not, the Bank would be violating anti-money laundering regulations.

“In this specific case, a misdemeanor procedure was initiated, if I understand well the case you are mentioning,” said Sinanović adding that, although the bank had paid a fine, the current law does not provide adequate enough penalties.

According to testimony from the bank’s staff to the BiH Prosecutor’s Office, everything pointed the client being of high risk. They explained that a probe should also have been launched because of the unusual way in which the money circulated. It was also said that the bank did not consult its own Department for Combating Money Laundering and the Financing of Terrorism, even though it was usual procedure in all other similar cases to do due diligence both of the client and the origin of the money.

According to available records, business contacts between Haden and Sberbank were initiated at the end of 2012, during the trade in Bosnalijek shares. In the beginning of 2013, Haden opened a bank account in Sberbank. The master list of authorized signatories was filed on January 14, 2013 and on that same day Haden wired from Luxembourg nearly 9.5 million KM to Sberbank in Sarajevo. Konstantin Zevlov, the head of Imperia Pharma’s legal department, who later became the head of Bosnalijek’s supervisory board, was the authorized user of the account.

Already the following day, money was transferred to the accounts of Eurohaus brokerage, which Haden had commissioned to buy the shares. With this money Eurohaus bought on Haden’s behalf a large package of Bosnalijek’s shares. On the day when this questionable money was advanced, Haden took a 7.8 million KM loan from Sberbank to buy shares.

The bank initiated a loan approval procedure based upon an application that was not dated. It just said: “I am requesting a long term loan in the amount of 7,823,320 KM in order to finance buying of shares, over a period of five years with a grace period until December 31, 2013.”

Sinanović of the FBiH Banking Agency says: “During the loan process the bank committed a serious mistake and a grave violation. That client should not have been granted a loan. This was a non-resident client with no genuine business activity to show. A review of the client’s financial statements did not establish that it would generate (enough) cash flow to pay the prescribed loan repayments”.

According to his knowledge, the loan was repaid, but everything that was done up to that point was not correct, said this expert for combating money laundering.

Sberbank refused to answer CIN’s questions with an explanation that this was a confidential matter.

The loan application that Haden submitted to the bank on January 9, 2013 listed Catherine and David Keogh as Haden’s owners. Just six days later, the loan agreement listed Tom and Roisin Donovan as its owners. However, the bank took no action to clarify the issue and in mid-March 2013, Haden was paid the agreed sum.

A co-owner of Luxembourg-based offshore fund Haden, Tom Donovan, revealed in his testimony details about its incorporation and its real beneficial owners: Omar Gurtskaya Guramovitch and Shorena Guguchiya. Haden funneled into BiH nearly 9.5 million KM of dubious provenance via a Sarajevo-branch of Sberbank Sarajevo due to the bank’s weak internal controls. This money was used for a buyout of shares of a Sarajevo-based generic drugs producer Bosnalijek. (Note: CIN has abridged the original testimony and adapted it for publication.)

CIN has acquired a video of Tom Donovan’s testimony before foreign investigators in which the Irishman reveals Haden’s hidden beneficial owners.

“Myself and Roisin were the two shareholders, each holding 50 percent of the shares. We held them in trust for two Russian people: Omar Gurtskaya and Shorena Guguchia,” said Donovan explaining that the ownership was regulated by an agreement that they had signed with the Russian citizens.

“Omar Gurtskaya Guramovich was Imperia Pharm’s director,” said Donovan. “Now, whereas myself and Roisin are directors and registered shareholders, we are in fact, nominal directors and nominee shareholders.” He explained that Catherine and David Keogh were the original owners and were his nephews.

Hidden ownership is grounds for a thorough probe, which the bank never carried out. The law stipulates that the bank must identify the beneficial owner of Haden before advancing money or disbursing a loan and establish whether this was a nominal owner who represented a beneficial owner. According to the Banking Agency of the FBiH, the bank did not identify and confirm Haden’s beneficial owners.

Haden stated in its loan application with Sberbank that it was just a proxy which bought the Sarajevo company on behalf of Imperia Pharma. But it failed to disclose that its nominal owner was a person heading the same Russian company.

In a statement before the prosecutors, Sberbank employees said that additional checks determined that two Irish persons were the only owners of Haden.

“However, Haden’s shares are payable to a bearer and there’s still a possibility that these are beneficial owners,” according to one of the testimonies.

Even though money of unknown origin was spent on the acquisition of the BiH drug producer and Sinanović says that damage had been done, not everything is lost:

“If an indictment was submitted and confirmed by a court of law, which meted out a money laundering verdict after a trial, then a settlement could be reached that could offset what had happened in the procedure,” said Sinanović.