Bosnalijek’s Money from Malta to Russia

Director Nedim Uzunović is suspected of siphoning off money from Bosnalijek through his own offshore companies, which he used to buy shares in this factory or distribute it to his family and associates. 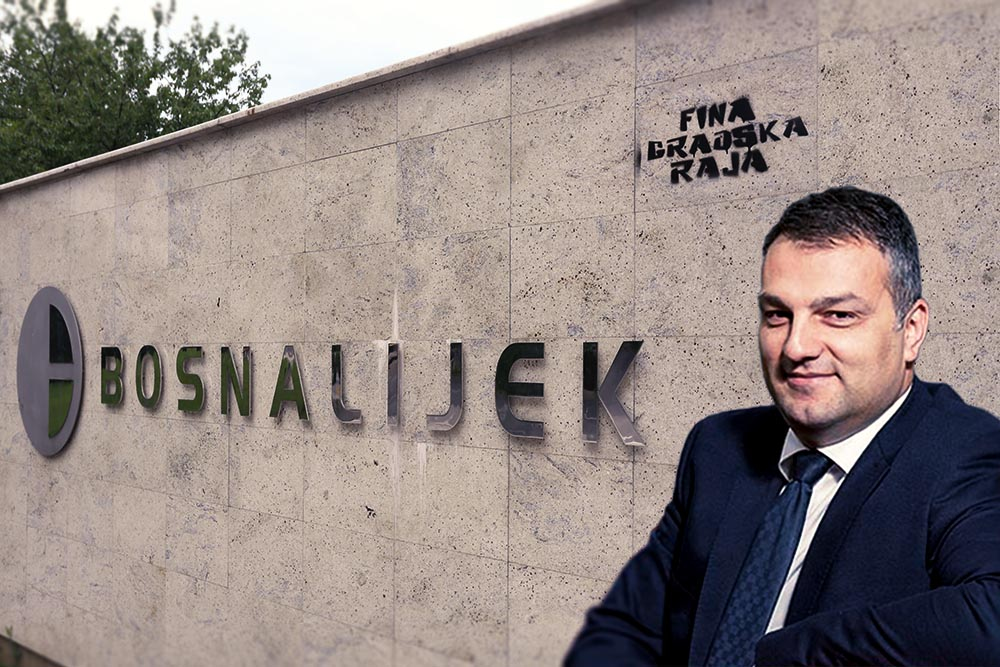 The director of Sarajevo’s “Bosnalijek”, Nedim Uzunović, will spend a month in the custody of the Court of Bosnia and Herzegovina due to the danger of escape, concealment of evidence, and obstruction of the investigation into the embezzlement of more than BAM 11 million of the largest domestic drug factory.

The Court of Bosnia and Herzegovina (BiH) also decided to block 23.6 percent of Bosnalijek’s shares owned by KBC Euro Credit Capital due to suspicions that this fund from Malta is under Uzunović’s direct control. The same measure was imposed on his other assets in BiH, including private accounts and real estate in Sarajevo and Konjic.

The court decisions were made based on evidence from the BiH Prosecutor’s Office suggesting that Uzunović embezzled the company’s money on two occasions, first as director of Bosnalijek’s Moscow office from 2005 to 2012, when the company was majority-owned by the Federation BiH Government, and then as General Manager in Sarajevo in 2016 and 2017 while the company was in the hands of Russian investors hidden behind the Luxembourg offshore fund “Haden”.

According to the BiH Prosecutor’s Office, Uzunović’s way of siphoning off money during his stay in Moscow was simple. As the director of the Bosnalijek representative office, for seven years he concluded fictitious contracts for consulting and marketing services with his own offshore companies. According to the findings of the expert witness of the BiH Prosecutor’s Office, BAM 8.8 million was paid to the Impericon Alliance Corporation from Seychelles, while a little more than BAM 2.2 million was given to the company Serreta Investing from the British Virgin Islands.

The director of Bosnalijek then withdrew cash or transferred money mostly to his own and the accounts of family members and associates in Russia, Croatia, Bosnia and Herzegovina, and Cyprus, which he then used to buy shares in Bosnalijek or repay debts of his companies.

Five years ago, CIN found that Russian buyers had about BAM 2 million left after the takeover of Bosnalijek, so they paid the money to Arhing E&C, owned by Zlatan Brkić, a BiH national residing in Russia. The journalists revealed that Brkić and Uzunović’s father-in-law, Hadžiomerović have two joint ventures in Croatia.

“How would I know who’s involved in what, where he gets his money from, and in what amount,” Hadziomerović told CIN reporters at the time, adding that he himself funneled several million euros from Russia into Croatia and Slovenia at one time.

The Cost of Pills for Bosnalijek
Two years after Russian investors took over Bosnalijek for 32 million KM their firm went bankrupt, defaulting on as much debt to the Sarajevo factory as they had put down for its acquisition.

Director Uzunović similarly shared the money that was transferred from Bosnalijek to the account of his offshore company Serreta Investing. He transferred a little more than a million marks to the private account of Hadžiomerović’s father in Croatia and the account of the company Emko Građenje from Zagreb, which they founded together. He gave nearly BAM 760 thousand to the company “Libero 5” from Konjic, owned by his father, and Valentina Buchneva, Uzunović’s associate from Russia, who later became one of the regional directors of Bosnalijek, received approximately the same amount. Uzunović justified most of these payments with loan or service agreements. The exception is BAM 133 thousand, which he transferred to the account of his wife Jasmina in Russia, stating that it was a “gift for his wife”.

“Bosnalijek” taken over with the Director’s money

In mid-2013, after Russian investors became the majority owners of the company, Uzunović was appointed director of “Bosnalijek” and thus given control over far larger sums of money.

Bosnalijek soon entered contracts for the delivery of large quantities of medicines to the Russian companies Imperia Sodrushestvo and Grama from St. Petersburg, and then Proteka from Moscow.

Five years ago, CIN reported that Bosnalijek immediately after Uzunović’s appointment, contracted the urgent drug delivery to Imperia Pharma, which was controlled by the new owners of Bosnalijek. By the end of 2014, the Russian company received  BAM 75 million worth of drugs, and in mid-2015 it went bankrupt.

Imperia Pharma defaulted on about BAM 28.3 million of payments for Bosnalijek, which is nearly the same amount the Russian investors paid for the takeover of the Sarajevo drug factory.

Shortly before filing for bankruptcy, Imperia Pharma signed a contract with Bosnalijek and a Sankt Petersburg’s firm Grama to transfer its debt on Grama. Grama, co-founded by Konstantin Zevlov, then chairman of Bosnalijek’s Supervisory Board, took over the debt and pledged to pay it off to Bosnalijek within eight months. There was no mention in the contract of penalty damages. 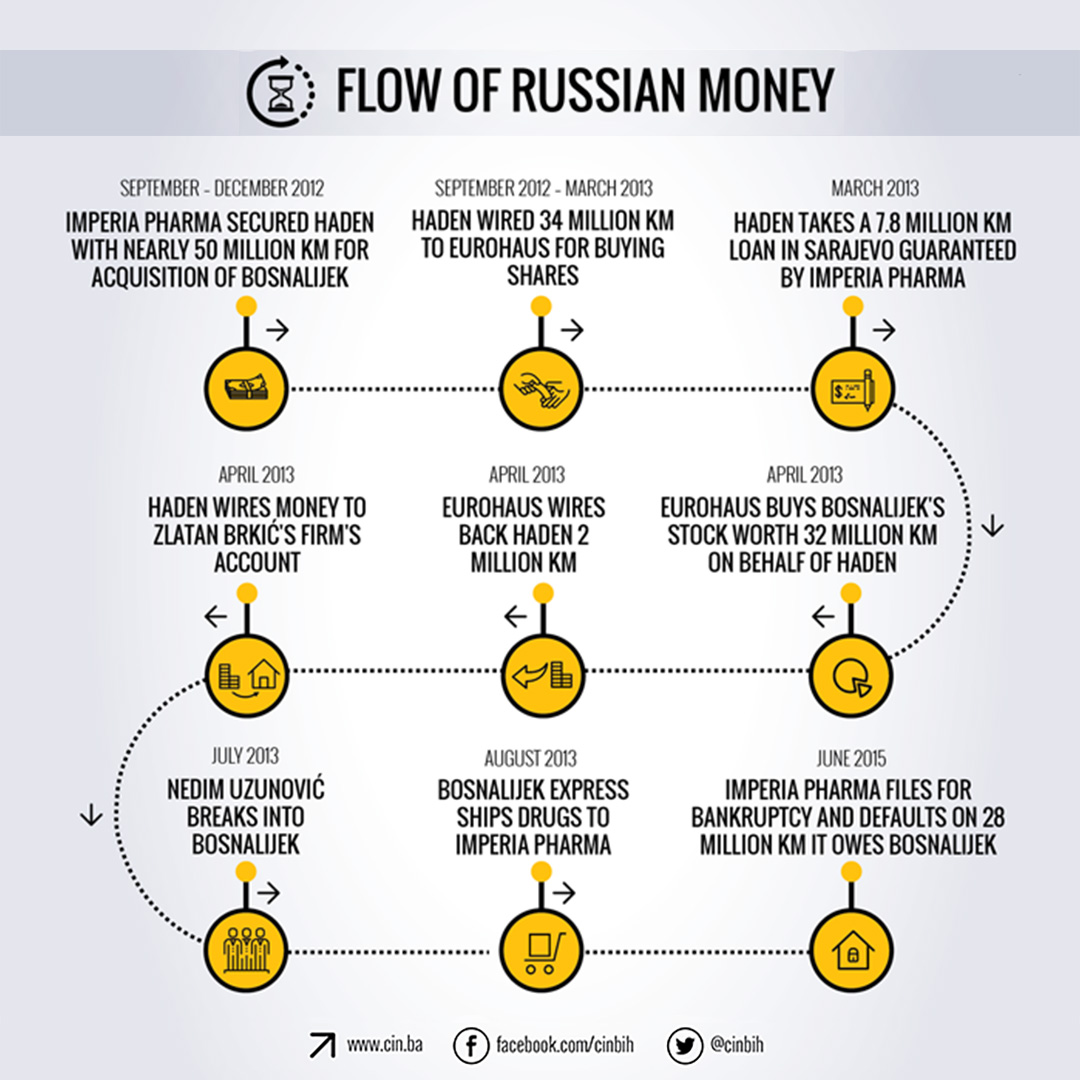 Although, according to the BiH Prosecutor’s Office, Russian buyers were repaying their debts, in 2015, Uzunović entered a contract with the Slovenian company Maksimus Holding on the sale of claims of around BAM 34 million from Grama and Imperiya-Sodruzhestva.

The company from Slovenia charged a commission of just over BAM 4.9 million for this transaction, and then transferred two million marks through the Swiss company Inwestfinanzierung and the offshore fund Sagehi Equity Fund Limited from Bermuda to the accounts of KBC Euro Credit Capital Limited. The Maltese company bought the shares with this money and soon became the largest individual owner of Bosnalijek.

According to the Prosecutor’s Office of BiH, Uzunović applied the same model of embezzlement in 2016 and 2017, but this time with other actors in the game.

In November 2016, he entered a contract with the Moscow company CV Protek for the delivery of BAM 53 million worth of drugs.  However, a month later, Uzunović signed an agreement with the Czech company Close Ville on the transfer of claims of BAM 5.5 million from the Russian company with a 10% fee.

In the explanation given to the Prosecutor’s Office by one of the managers of Close Villa, the contract was concluded because CV Protek was allegedly on the verge of bankruptcy, so there was a danger that the debt would not be paid. However, the business reports of the Russian company did not indicate any financial problems, and CV Protek regularly honored its obligations for the delivered goods.

It soon became clear that this contract was not made to protect Bosnalijek, but because of Uzunović’s plan to take over the company. Namely, at the end of January 2017, Close Ville collected BAM 5.5 million from CV Protek but Instead of forwarding it to Bosnalijek, in agreement with Uzunović, it paid it to the Swiss company Inwestfinanzierung. This company then transferred the same amount through an offshore company in Bermuda to the company KBC Euro Credit Capital Limited, which bought Bosnalijek shares in February.

According to the report of the FBiH Financial Police, due to the contract on the transfer of claims with the Slovenian Maksimus Holding and the Czech Close Ville, the Sarajevo Drug Factory suffered damage of BAM 10.1 million.

Through a series of texts, CIN journalists described the controversial Russian takeover of Bosnalijek shares and the role played by director Nedim Uzunović and owner and employee of the Eurohaus brokerage house Zijad Blekić and Edin Dizdar.

In October 2021, Blekić and Dizdar are accused of organizing illegal trade in shares aimed at taking over the company Unioninvest-izgradnja objekata, and taking part, as members of the organized group, in the embezzlement of a BAM 30 million loan from NLB Bank from Slovenia.

A Court Deed Covering Up Money Laundering
The real estate of a stockbroker Zijad Blekić is suspected to have been used for laundering BAM 1.1 million from NLB bank, and six years later, in the Travnik Land Registry Office, it was deeded to a non-existing company.
Facebook
Twitter
LinkedIn
Email
WhatsApp
Print 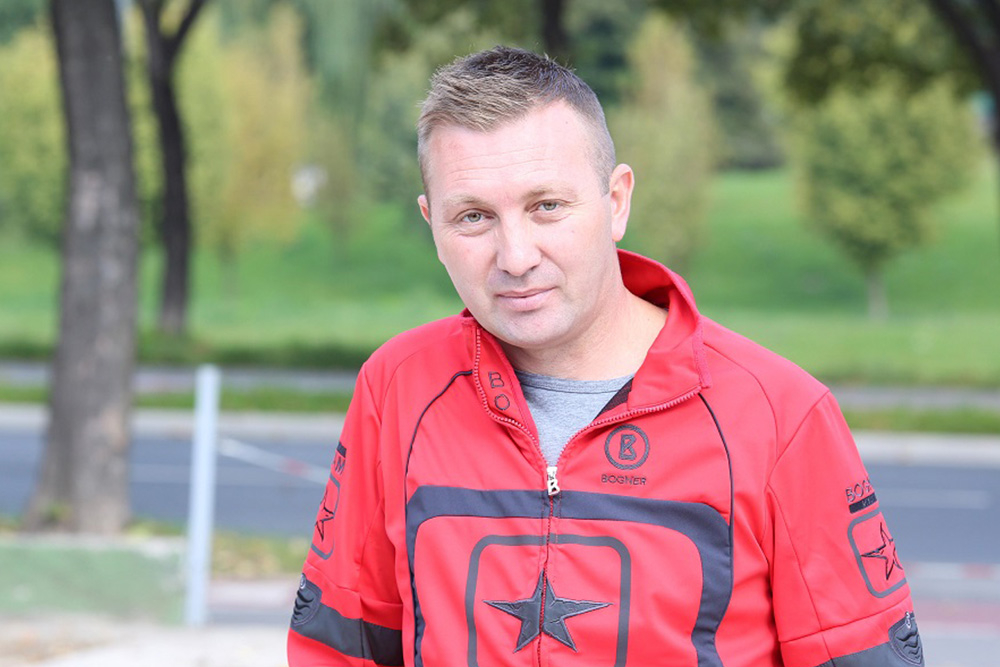 Senaid Begić sentenced to two and a half years in prison