New laws are not enough to stop domestic violence. The laws need to be strengthened and police, prosecutors and judges must work harder to enforce them, activists say. 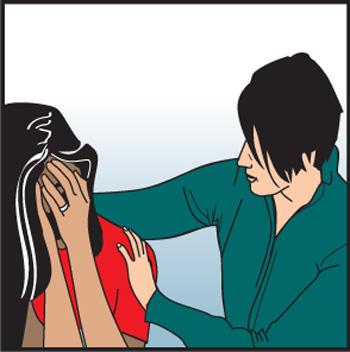 New laws both entities passed last year to curb domestic violence in Bosnia-Herzegovina have done little so far and may be little more than admission that there is a problem.

Victims suffering at the hands of their husbands, fathers and brothers still cannot seek help without battling prejudice against women and traditions that prize privacy about family matters. They cannot count on psychological or drug and alcohol treatment for spouses who need it. If they should actually get the attention of police and courts, they cannot rely on their abusers being prosecuted or put away for long.

‘Here, the violence is not taken seriously’ said Azra Hadžajlić-Dedović, a reseacher at the School of Criminology in Sarajevo.

Police and activists disagree about how many women are beaten, children attacked or elderly parents battered, but both agree that only about 10 percent of such cases ever get reported.

Government agencies did not even collect or keep statistics on abuse until the new laws were passed last year. Before then, wife-beatings were lumped in with bar fights and drunk driving as misdemeanors. When women ended up dead, their deaths were recorded along with other murders.

When reporters from the Center for Investigative Reporting in Sarajevo (CIN) wanted to talk to prisoners serving time for domestic violence they had to visit five prisons around the country, go through prison and court files and ask wardens to help find them. In this way, CIN found 19 prisoners serving sentences for raping and murdering relatives, 14 of whom agreed to interviews.

To get a taste for the scope of the problem, CIN gathered data from the entities’ ministries of the interior (MUP) and from the Republika Srpska Gender Center. They show some 2,191 cases of abuse reported in 2004 and 2005. Information on the first half of 2006 will not be out until later this summer.

But studies by the Helsinki Committee for Human Rights and by Hadžajlić-Dedović’s department looking at reports to non-governmental organizations as well as to police found 2,896 cases in 2004 alone. The professors, in the first extended study of domestic violence in the country, found that 97 percent of the violators were men between the ages of 20 and 60. And they discovered that fewer than half these cases went to court and resulted in verdicts.

Mara Radovanić, a lawyer and vice-president of Lara, a Bijeljina women’s group, said the Law on Protection from Family Violence passed by the RS last December is deficient and weak.

‘Women’s organizations acted together and submitted amendments on a first version of the law’ she said. ‘But unfortunately the RS parliament at the end accepted the original draft and amendments were rejected.’

Even that law is poorly enforced, she said, because of lack of money and lack of interest. She noted that the government had no such trouble with the Value-Added Tax law that was ‘very quickly passed and was implemented straight away.’

Women’s groups have little flattering to say about the domestic abuse law the Federation of BiH passed in April 2005 either.

The laws, said Nasiha Omanović, manager of a Sarajevo safe house for battered women, are a step forward, but a number of sub-acts and regulations are still needed to make them work.

Neither of the laws provides a way to pay for drug and alcohol abuse treatment, anger management or family counseling.

They call for, but don’t fund, effective legal restraints to keep violators away from victims. Omanović said abusers walk the streets freely because Bosnian prisons are full.

Another problem is that the entity laws do not match. Offenders get off easier in the RS and fines for officials who fail to report suspected domestic abuse are far lower there.

Hadžajlić-Dedović doesn’t blame the laws themselves but their enforcement. ‘All our laws are okay on paper’ she said, but in reality, women withdraw complaints when violators tell them it won’t happen again, prosecutors play down cases because they don’t want to get entangled in private family matters and judges mete out mild punishments.

Ideally, she said, she would like to see police use women inspectors trained in criminal law and working with victims put on the job to deal with domestic abuse cases.

Activists said more education by officials, schools and media would shed light on the problem and make it easier for abused women to seek help in the face of traditional and still-strong notions that women should endure quietly whatever befalls them.

Agencies can advise a victim, send her temporarily to a safe house or provide her with short-term financial aid, said Stanka Todorović, a psychology and counseling professor from Novi Grad.

But centers only work with misdemeanor offenders. They don’t do preventive work, recommend treatment and only intervene after an offense has actually taken place. However, the new laws mandate that they report abuse to authorities.

They don’t offer or cover the cost of anger management or psychiatric treatment. They say that hospitals should be doing that. Omanović said it is important to define what each institution in the society is supposed to do about violence because of disputes like this.

Until the laws were passed, centers did not even have separate departments to deal with domestic violence. Women’s groups say there are signs that social workers doing abuse work still do not take it seriously.

Private groups have taken on the mission of fighting domestic violence. Omanović said a network of 34 groups organized since 2000 finds medical help and shelter for battered women and children. They have treated 650 people and she sees a difference in attitudes about their work now.

‘Five years ago everybody laughed at the idea of a women’s shelter, like ‘What is that all about — a woman’s hotel or something?’… Now it’s a little bit different’ Omanović said.

Activists say that even the small number of men held accountable for domestic violence are treated too leniently every step of the way by police, prosecutors and judges.

One reason Hadžajlić-Dedović calls for women inspectors is that police do not act automatically according to a set procedure when they get a complaint about family violence. Too often, she said, they wait for repeated offenses and more serious injuries before acting.

Judges, she said, seem to believe that a guilty verdict is punishment enough, because it means an embarrassing invasion into a private area. She said judges and prosecutors don’t like these kinds of cases because they envision angry relatives locked in family battles involving them and ‘knocking on their door.’

She talked about a case where a father was sentenced to three years for incest and called that sentence ‘a denial of reality. That’s shameful…that’s too lenient, pathetic, ridiculous.’

While murder under the Penal Code provides for sentences of 8 to 12 years, men who kill relatives often get less. Petar Stjepanović from Sekovica was sentenced to seven years for fatally shooting his wife. He fired at her five times. Zeljko Zec from Novi Grad was sentenced to five years for killing his mother.

Like all in prisoners in BiH, those convicted of domestic violence enjoy privileges. CIN reporters were unable to interview a convict in a prison in Tunjice, for example, because he was on a weekend leave. Women complain that their abusers are often back in their lives again on weekends. Zenica prison officials put inmates in rooms with TVs rather than cells with bars. One prisoner there has received permission to serve his sentence outside the prison entirely.

At Foča, prisoners who behave well can serve their time at an unlocked prison farm where they help grow vegetables and fruit and tend livestock.

Stjepanović met CIN reporters at the gates to a restaurant on the farm named ‘Brioni’ after Tito’s favorite island resort. A path lined with trees led to a patch of green and a hutch of bungalows. There’s not a guard in sight. A crystal-clear brook runs through the farm.

‘When I finish this conversation with you’ said another inmate convicted of battering his wife to death with a hammer and throwing her body in the Sava, ‘I’ll take my rod and go fishing.’