Pedestrian Street Instead of Veterans’ Memorial

On June 1, the municipality of Novi Travnik turned over 150 cubic meters of stone to the Bugojno firm of Stonex for construction of a veterans’ memorial. That monument was never built. 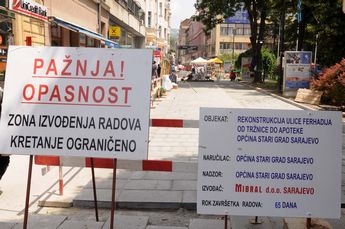 On June 1, the municipality of Novi Travnik turned over 150 cubic meters of stone to the Bugojno firm of Stonex for construction of a veterans’ memorial. That monument was never built.

Instead, Stonex sold half of the stone to theSarajevoborough of Stari Grad for reconstruction of the part of the Ferhadija pedestrian street.

How much the stone the municipality paid for the stone has not been disclosed, but a market price on square blocks like those built into Ferhadija puts the cost at nearly 100,000 KM.

Refik Lendo, the head of Novi Travnik municipality, asked for granite blocs from the Ministry of Industry of the Central Bosnia Canton (SBK) on May 29, 2012, explaining that they were needed to build a monument.

Minister Sedžad Milanović allowed for free but “limited exploitation“ of granite from the Stajište quarry near Novi Travnik on condition that it be used only for the monument. The document reads that use of stone for other purposes would be considered a misuse and void the agreement.


Milanović said he did not know what the stone had been used for.

A day after the minister’s approval, Lendo gave granite blocs to Stonex. His decision also reads that the stone is intended for building of a memorial – a contract earlier awarded to Stonex.

However, Stonex sold half of the stone to aSarajevofirm Saraj-taš which then resold it to a Sarajevo firm Mibral repaving the Ferhadija.

In a brief telephone conversation with the reporters from the Center for Investigative Reporting in Sarajevo (CIN), Lendo said that he had arranged “some sort of compensation” with Stonex, but he could not explain what.

Quality Control of Stone after the Job is Done

Admir Hadžiabdić, the head of Stonex operations, told CIN that his firm took out 75 cubic meters of granite from the query and provided it for the reconstruction of Ferhadija.

This amount will suffice to finish the work because about 700 square meters of the pedestrian street is covered with stone slabs eight centimeters wide, according to the municipality’s Internet web presentation. The municipality’s web page further reads that Mibral started paving a stretch between Markale Indoor Market and Sarajevo University’s School of Economics with Jablanica granite on June15.

Jablanica granite was used in 2001 and 2002 for the reconstruction of the Ferhadije betweenSarači streetand the Cathedral, but the newly reconstructed stretch is visually different. The stone slabs are lighter and of inconsistent size and dimensions.

The grand opening of the newly reconstructed part took place on July 10, 2012 According to the municipality’s web page the cost of works was 290,000 KM.

Milan Bralović, the owner of Mibral which did the work, said he did not know where the granite came from.

Amel Mandžuka, director of a Jablanica firm Granitmont which used Jablanica granite to pave the roads of several neighboring streets, said that the Municipality Stari Grad is taking advantage of stone which is similar in quality.


Municipal authorities refused to give CIN reporters data on the origin of the paved stone, its quality or on how Mibral was chosen as contractor. The municipality has no obligation “to investigate the stone’s origin, but only the quality that is attested at the end of the works,” they told CIN.

Jablanica granite, or Gabro is 81 percent more resistant to wear and tear than granite known as Nero Bosna from the Stajište quarry. This is seen from comparison of Gabro stone tested in the Sarajevo Institute for Materials and Constructions with data on the quality of Nero Bosna stone, published at the Internet web page of Merkez Oil which sells the stone from Stajište quarry.

Granite came to Ferhadija from Stajište quarry which had been worked by a German firm NT IGM until 2004. After it left BiH, the firm’s debts to owners were paid from proceeds of a court-supervised sale of machines and granite slabs stored in the quarry.

However, the ministry has still not established a control over the Stajište quarry and no official could say how many granite blocks had been taken out of the quarry, who took them and by whose order.