Police often are tempted by bribes and the lure of extra jobs just to make ends meet on their low wage – wages that don’t even cover the cost of a uniform. 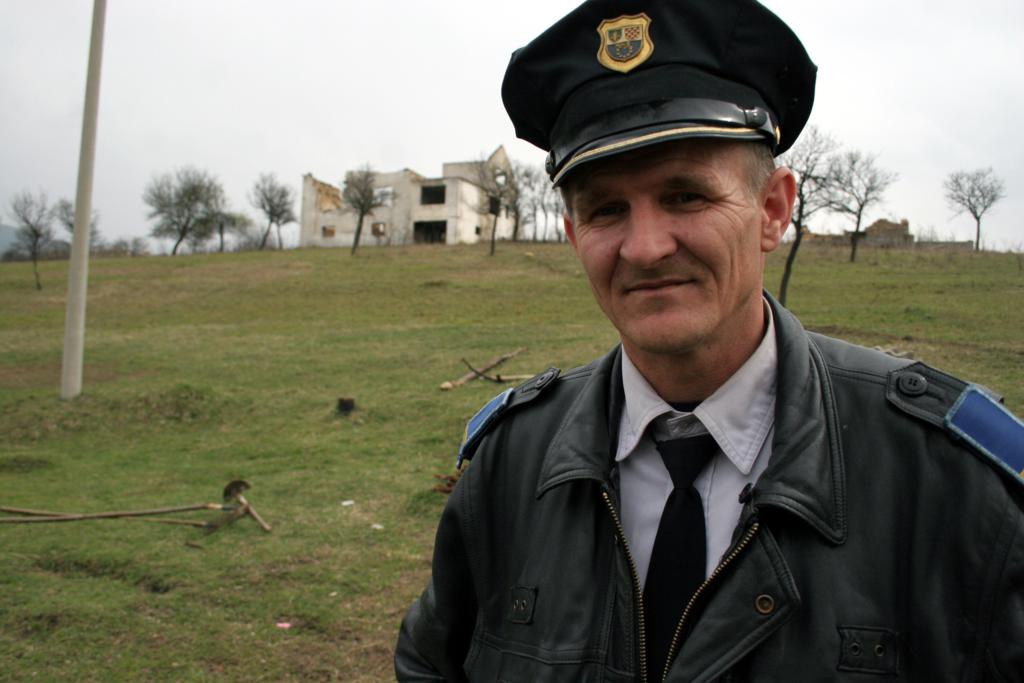 Iva Klašnja’s life changed forever on the night of Nov. 25, 2005, when her policeman husband was shot to death in the line of duty. Since that night, the 42-year-old widow has struggled to raise her three children on a 350 KM pension.

What hurts most of all is knowing that Mile Klašnja would still be alive if he had only een issued a bulletproof vest worth just 361 KM.

Klašnja paid the ultimate price of a system that pays its policemen too little and equips them haphazardly. The low pay and bad working conditions endanger not only individual lives, but the integrity of police forces in which impoverished men are left susceptible to bribes and corruption. Professionalism is hard to maintain among officers asked to take risks for salaries of only 300 to 500 KM.

Over the past six years local police departments and state customs and police agencies have bled personnel no longer willing to work police jobs for low pay. In Bosnian Podrinje Canton, for example, 130 police have quit over that time, some moving overseas looking for better opportunity. In Zenica-Doboj Canton (ZDK), 600 people have walked away from police jobs.

Bullet-proof vests are in short supply, but in ZDK, Livno and Goražde cantons, getting money for new boots is even hard. Uniforms, worn daily, are up to 10 years old.

Across the country, police pay for overtime or work during holidays does not exist.

Many officers take on second jobs in defiance of laws forbidding this because they cannot otherwise support their families. Laws that forbid officers from going on strike to demand better treatment also have been broken by men unable to think of what more to do for change. Police in Una-Sana Canton (USK) struck two years ago in search of bigger salaries and more equipment to do their jobs. They are contemplating doing it again.

Happy to be a policeman

Klašnja, was overjoyed to get a job five years ago as a policeman in the town he had lived in before the war. He got to return to Bihać and to bring along his wife and children.

‘We had plans’ said Iva Klašnja, ‘and then one phone call changed everything….’

Klašnja had pulled over a car. The driver shot him three times in the chest and wounded another policeman before a third killed him.

These are not just the words of a grieving woman. Alma Midžić, president of the USK police union agreed that his colleague died because he didn’t have a vest. And he worries because other officers also don’t have vests and because there is no money to buy them. Worldwide, many police forces now provide bulletproof vests and even require officers to wear them.

Pay and conditions drive away people

Deep discontent with work conditions and bad pay is prompting more policemen to quit. Some officers, such as Amir Dedović in Goražde say public safety is at threat because of this trend, but that is hard to prove. In a bad post-war economy, all jobs, even those as policeman, are precious.

Statistics show that Bosnia and Herzegovina (BiH) has 5.7 policemen for every 1,000 citizens, which is high. Slovenia, for example, according to the most recent existing data collected by the United Nations has about 3.

Still, there is no question that policing has become so undesirable that attracting good people – and keeping them free of the temptation of bribes – is difficult. In Goražde, a starting salary for a policeman is 310 KM. Teachers, in comparison, make 583 KM, nurses 480 KM.

‘How can colleagues be professional when they have to worry about what they are going to buy for breakfast and whether they can afford that breakfast’ said Dedović.

Goražde is no worse than other parts of BiH.

Elvedin Mijoć, a policeman in ZDK for 15 years, said 600 policemen have left the force over the past five years and he guesses another 300 are looking to leave. Still, about 1,300 policemen work in a canton of nearly 402,000.

The ZDK policemen earn about 400 KM.

‘A policeman who comes to work in the morning, with one half or one mark in his pocket, knows that at home he has left water, electricit and telephone bills and that he already got warnings about not paying some bills. How can he work?’ said Mijoć.

One such policeman is Mijo Jurić, a father of four, who lives in the village of Juke near Kakanj. He has been an officer for 10 years and earns 400 KM. His wife Jasna does not work.

‘You know what kids are like’ he said, ‘They want to buy clothes in order not to be different from other children and they are embarrassed to go to school in torn shoes.’ His children walk three kilometers to school every day.

‘The worst is in the winter when there’s no fruit and children want fruit’ said Jasna Jurić, ‘and we cannot buy this for them.’ Without their cow, she said, they wouldn’t be able to feed the family.

Neither his oldest son, now 14, nor his youngest at seven want to be a policeman like their father when they grow up.

Policemen themselves admit that it takes a rare person among them to resist the temptation of a bribe. In their circumstances, taking money from law-breakers seems almost a logical consequence.

Mahmut Alagić, a policeman from Sanski Most who has worked there for 15 years, says he would never do it himself, but he completely understands colleagues who take bribes.

‘Listen’ he said, ‘all eyes are on policemen and those 10 KM they take or don’t take, and our ministers are stealing everything – nobody cares about that. Well, those are our big frustrations.’

Mijoć from ZDK said policemen in BiH have a million reasons to take money – and only one to resist taking it.

‘What character you must have to refuse when they offer money, and you have not even a mark in your pocket’ he said.

Only those who hold tight to what they were taught at home, that dishonesty is wrong, can resist, he said.

In most cantons of the Federation of BiH (FBiH) and in the Republika Srpska (RS) too, poor salaries are not off-set with equipment and uniform allowances.

The results of such shortages are important, experts said. Lack of self-esteem and poor morale from being poorly outfitted impedes professionalism. Worse, a lack of vests, and equipment for tapping phones and detecting drugs in the blood, prevent police from getting involved in more serious crime work such as uncovering drug trafficking networks.

Marko Benković, a police union representative in Posavina Canton, said new uniforms would not be a big investment, but canton officials are stalling until national police reforms are instituted.

‘You can’t allow a policeman to look worn out,” he complained. “He is a symbol and a picture of the state.’

Dubravko Jukić, president of the Police Union of the Republic of Croatia, said policemen in BiH look miserable. Their uniforms are old and don’t match. Their holsters don’t fit the size of their guns. Such officers, he said, cannot effectively exercise authority over criminals or win respect from citizens.

He said he fought to arrange for the annual purchase of new uniforms for Croatian officers and for new civilian suits for plain clothes officers. Police there collect extra pay for working overtime, weekends and holidays. And a high-school educated policeman in Croatia earns.

Himzo Đonko, head of police administration in Mostar, manages some 500 policemen. In a recent meeting with the European Union Police Mission in BiH (EUPM) he was given a CD full of information to help him.

‘I asked them ‘Gentlemen, what should I put that in, into what?’’ he said. ‘I have no computer.’

Duško Jandrić, president of the police union in the RS, said police have no right to stop working and go out on strike – the most radical way to fight for change. On the other hand, there is little evidence that strikes work either.

They are supposed to rely simply on the good faith of officials they negotiate with. But, he said, ‘Negotiations ad nauseum and pressure’ have not worked. Police might get some improvements if they could say, ‘OK, if you don’t do this or that, we are out of the job tomorrow.’

Policemen in a few places have been provoked to strike. USK police staged a work slowdown two years ago for 13 days. Some 75 percent of the force hung around on streets rather than stop any cars.

Alma Midžić, the union representative said: ‘The strike announcement itself, anywhere else in the world, would make authorities worry, only here nobody cares. Nobody lifted a finger.’

Eventually officials agreed to provide better pay and conditions, but those promises have remained unfilled.