The spring season for the Premier Leagues in BiH football is over and opinion is mixed – some think the fairness and quality of the league are improving, while others say nothing has changed. Statistics show there is little change from previous seasons. 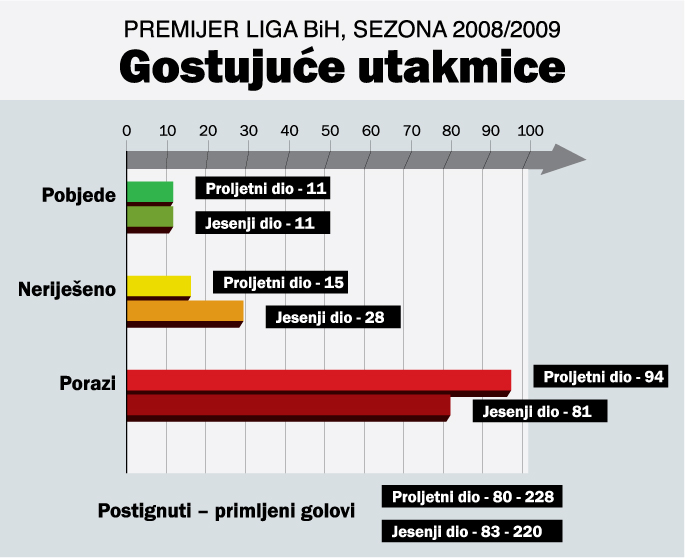 Winning on an opponent’s home field has been an almost insurmountable obstacle for Bosnia and Herzegovina’s Premier League clubs during the spring season, a situation hardly different from the one found in the fall by reporters from the Center for Investigative Reporting in Sarajevo (CIN).

This does not happen in the leagues of neighboring countries. Two rounds before the end of the season, clubs from the First Croatian football league have won 48 times in 186 matches, or 25.8 percent of the matches they played away from home. The Croatian experience is closer to that of Premier League teams in England, where one round before the end their season visiting teams have won 107 of 370 matches for a 28.9 winning percentage

Faced with the statistics, Izudin Ibrahimkadić, president of the BiH Football Association Competition Committee, admitted that there was still some trading of wins among clubs, but said nobody could change that. He said that, despite the statistics, in comparison to the previous seasons, this one has seen visible improvement in every respect.

‘I say unwaveringly that the atmosphere when playing guest matches (away from home) is much better and of a greater quality compared to what it used to be’, said Dragan Jović, coach of Mostar-based Zrinjski, which won the championship this year.

According to Jović, home field advantage or biased referees are not the only reasons for the small number wins by visiting teams. The ambition of teams to win at home is another element, he said, and sometimes teams don’t take their best players to other towns, but keep them for home matches.

‘Some people talk about it, but it’s not true that it’s better. The refereeing is not better, the attitude, nothing …In my opinion this is not a proper league’ says Muhidin Raščić, a member of the executive board of the BiH Football Association.

Ratko Ninković, a coach of Zvijezda from Gradačac, said there was little progress and that refereeing remained the biggest problem.

Salem Prolić, secretary of the committee for refereeing at the BiH Football Association, said the clubs do whatever it takes to win at home and said referees find themselves under enormous pressure to call the match in favor of the home team.

Nermin Šabić, who plays for Čelik of Zenica and is a former member of the BiH national team, agreed. ‘Clubs are using whatever it takes. The referees have no other way…all those people who are performing that duty, to protect themselves better, have to referee as some host or whoever else asks them to.’

Sakib Malkočević, a coach of Sloboda from Tuzla, said, ‘I’d like to change that.’ Instead, he said, he would rather ‘lose five times in the season in Tuzla, but to win as a visiting team. Then it would be more interesting and unpredictable.’

In interviews with CIN reporters during the fall season, 24 of 26 current and former coaches of the Premier League said that they thought competition was influenced by various forces. Many fretted that the situation might worsen in the spring season when teams start fighting for survival in the league or for a better position to enter European competitions.

The statistics show that their concerns were justified: the rate of visiting team losses—seen as a sign that the matches were somehow tilted in favor of the home team—increased as the season reached its end.

For instance, in the final four rounds, which consisted of 32 matches, visiting teams have won only three times and tied twice.

‘We don’t say this for nothing – what you grab in the first part, that’s it. It is much harder afterwards. Someone always needs it and you cannot get a good result’, said Malkočević.

Apart from the lopsided number of home wins, the last several rounds have been dominated by incidents involving fans. The media wrote less about match results than the burning of a bus carrying Sloboda fans in Mostar, and the clash between Sarajevo fans and police at Grbavica stadium during a derby with Željezničar. They also gave more coverage to a report that someone pulled a gun on a referee and his assistants and threatened to kill them if Travnik lost to Velež on Travnik’s home field.

In the next to last round, fans of Borac from Banja Luka rushed into the field and attacked referees and opposing players after their team failed to beat Istočno Sarajevo’s Slavija on Borac’s home field.

‘Do you see what’s going on, that they hardly made it out alive? Whether they are to blame or not, there is somebody to punish them. But who is going to referee over some matches if he faces the prospect of getting killed?’ says Raščić.

The league’s standing, already poor abroad, has not significantly risen. According to the International Federation of Football History and Statistics (IFFHS) rating for 2008, BiH Premier League placed 98th of 100, only one spot higher than in 2007. IFFHS publishes the names of the best 100 leagues in the world. Behind BiH are only Jordan and Indonesia.

And the IFFHS’s rating of individual clubs was no better. The highest ranked club in April was Zrinjski from Mostar at 484th. Zrinjski is this year’s champion.

Croatian champion Dinamo from Zagreb is rated 65th by the IFFHS, while Serbian champion Partizan of Belgrade is rated 101st.