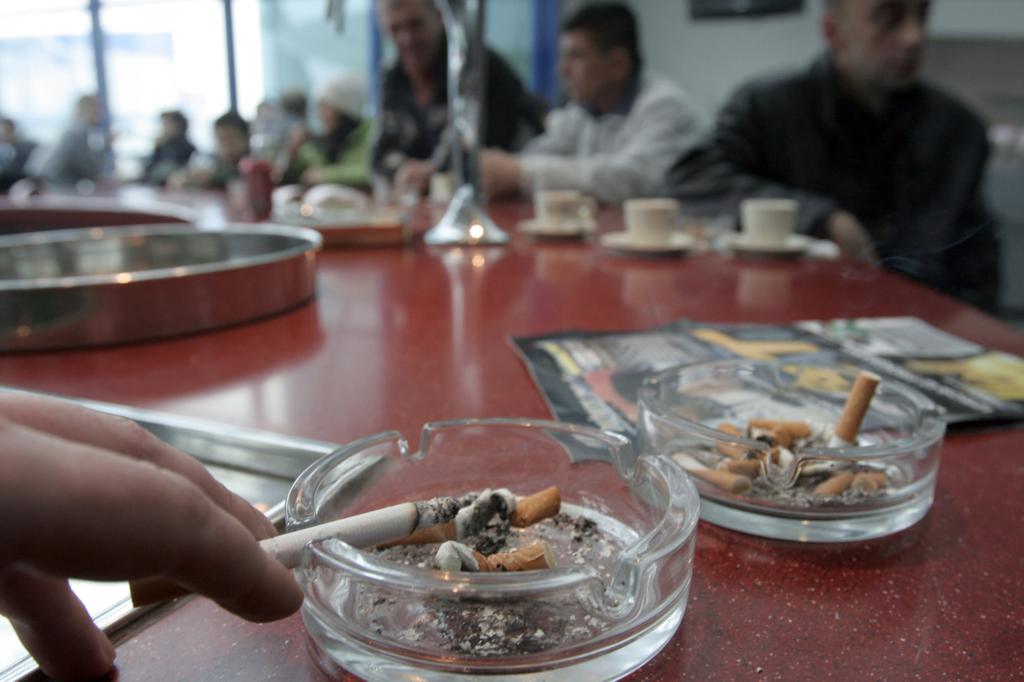 Sanja Mandić-Soldo blows out a stream of smoke over the morning coffee she enjoys with five colleagues.

The open door to the little room where they sit spills out a gray mist from the cigarettes she and two others inhale.

It could all be a typical café scene on a cold winter morning in any part of the Balkans, but for one fact. Mandić-Soldo and the others are doctors, taking a break in the designated staff smoking zone on the second floor of the Center for Family Medicine a Center for Family at the Vrazova Medical Center in Sarajevo.

They are breaking the law. Smoking is outlawed in all health facilities in Bosnia and Herzegovina (BiH), but hospital administrators allow it because so many doctors and nurses say they need a cigarette every once in a while.

‘We are telling our patients to stop smoking because of the health risks’ said Mandić-Soldo. ‘But I’d guess around 60 percent of doctors in Bosnia are smoking.’

The irony of that is especially strong in her case. Three years ago, at age 42, she suffered a stroke that induced double vision. As a result she has cut down from three packs to one a day.

The fact remains that doctors and nurses in BiH and the rest of the region are among the heaviest smokers anywhere in the world.

Recent BiH estimates suggest that around 50 percent not 60 percent of health care professionals smoke. World Health Organization (WHO) research on European nations, not including BiH, found that Georgia had the highest rate of smokers among health care professionals smoke, with 44 percent overall. An alarming two thirds of male medical staff in the former Soviet country smoked. Similarly, more than half the males in the Romanian health service smoked, pushing its average over 40 percent, slightly higher than that of Macedonian medical staff.

Smoking among doctors and nurses in the region typically mirrors the general population, where between 35 percent and 50 percent of citizens routinely smoke more than 10 cigarettes a day. In BiH, almost 50 percent of men and 29 percent of women smoke, among the highest rates in a region full of heavy smokers.

Statistics show that in Western Europe and the US, health professionals have gotten the word about the risks of smoking far more than the general population. Fewer than 7 percent of the health professionals in the United Kingdom smoke, for example, compared to nearly three times as many smokers in the general population. In the United States, one in five adults smoke, but only one in 10 doctors.

A high prevalence of smoking among health professionals means that the very people expected to lead anti-smoking efforts are unwilling to get involved in tobacco control, according to research carried out by Dr. Haik Nikogosian, a specialist in non-communicable diseases at the WHO.

‘Doctors who smoke in Romania (around 30-34 percent) probably think, just like their patients, that smoking won’t harm them’ said Florin Mihaltan, president of The Romanian Society of Pulmonology, whose members specialize in dealing with respiratory problems.

A colleague, Dr. Radu Negoescu, head of the Unit of Healthy Lifestyle Promotion at Romania’s Institute of Public Health, added: ‘In practical terms, efforts by health care professionals to correct the problem are still weak, including the will and effort to correct their own smoking profile.’

One Moldova Hospital has taken a novel approach in an attempt to hasten change.

‘We tried to convince the doctors to quit smoking. Last year we organized a contest. The reward was US$100 for doctors who would quit smoking for 6 months’ said Mihai Oprea, chief-doctor of the Republic’s narcology hospital responsible for treating addictions. ‘Ninety percent of the participants quit smoking for good.’

More than a half century after researchers first linked smoking with high levels of lung cancer, cigarette consumption is more widespread here than almost anywhere else in Europe, and more than double that of the U.S. Attitudes among medical practitioners are clearly a factor why.

Jatić thinks it’s time for more punitive measures to help stop smoking in BiH. He is in favor of local hospital inspectors making an example of doctors like Mandić-Soldo and those of his own institution through fines for smoking on the premises.

But he has no illusions that habits will change anytime soon.

‘I don’t believe in significant changes in quick time’ said Jatić. ‘Small but firm changes are realistic. Every day it gets better. In a couple of decades the situation should be better.’

His view that it may take 20 years for the region to catch up with Western Europe also appears to be reflected in WHO research. Its study found that the smoking attitudes of third-year students attending medical, dental, nursing, and pharmacy schools in several countries in Southeast Europe are no different from those of current health professionals.

In Albania and BiH, four out of 10 third-year nursing students smoke cigarettes, roughly the same as older medical professionals. And fewer than a third of Belgrade medical students surveyed received any training about teaching smokers how to quit. That rate fell to 20 percent of students in Croatia and just one in 10 in Albania.

A Pack a Day

While substantial work is still required to educate medical students, efforts to help control smoking in other ways are now also in the spotlight.

Regulations banning smoking in public places and restricting advertising are already in place in most European countries, but are poorly enforced in Eastern Europe, say health promotion specialists such as Romania’s Negoescu.

In Albania, tough new laws were introduced in May to prohibit smoking in bars, restaurants, government offices and other public locations. As a result, the American Cancer Society (ACS) sponsored a smoking behavior survey of some 4,000 adults in April and plans to take a closer look at the effectiveness of the new rules later next year. Already, preliminary results show some surprising findings.

‘The average smoker is consuming 22 cigarettes per day’ said Hana Ross, strategic director of International Tobacco Surveillance at the ACS. ‘That is very, very high. In Russia and the Ukraine, which we think of as intense smokers, it is closer to 12 cigarettes per day.’

The study also found that nearly 60 percent of Albanian smokers are men willing to spend heavily to fuel their habit. The average was $436 a year, or the equivalent of two months salary, said Ross.

Still, cigarettes are cheap in Southeast Europe compared to other parts of the continent. A pack of Drinas, one of the most widely smoked brands in BiH, costs as little as 1.2 KM, or € 0.60. In Austria, a pack of a popular brand is €2.43.

Businesses that eschew smoking are emerging, however, even in the smoking-tolerant cultures of the Balkans.

Torte i to in Grbavica became one of the few cafes around the BiH capital of Sarajevo to offer an entirely smoke-free space when it opened in September. Co-owner Sandra Jelin-Kadrić said she wanted a place where children could play and people could relax in a clean environment. So far, the smokers’ reactions have been positive.

Restaurateurs with more experience say the change will be hard. From 2005 to 2007, Saša Obučina kept his Karuzo restaurant in Sarajevo smoke-free, but he recently lifted the ban. Over the past two years the restaurant has gradually lost customers. Even internationals, often more attracted to smoke-free dining, began to dwindle.

‘I wanted to do something healthy for this town’ said Obučina, a former smoker. ‘People aren’t ready for such things.’

Laws and other punitive measures that could limit smoking and the costly health problems it causes have lagged because governments often lack the cash and public pressure to act more aggressively. Until recently they have been outmatched by local cigarette makers that are growing aggressively and major international tobacco companies that see the region as a highly profitable business area.

Romania has responded by putting a ‘vice tax’ of 30 percent on the sales price of cigarettes, and despite a history of tobacco smuggling and cigarette production, Serbia appears to have at least slowed the spread of smoking with help from a massive nationwide campaign begun in January. It features billboard photos of a suicide bomber. Instead of dynamite, he wears a vest of supersized nicotine sticks.

Cash for the campaign came directly from smokers. Serbia collects 1 dinar from every pack of cigarettes for the Ministry of Health, a third of which goes towards anti-smoking campaigns.

‘We are looking to see if we can implement a similar thing here in Bosnia’ said Dr. Aida Ramić-Čatak, head of health promotion at the Institute of Public Health of Federation BiH. ‘We are trying to enforce a comprehensive health promotion strategy but we don’t have the money. So we have proposed a similar kind of thing here … [using] between 0.2 to 0.5 percent of the current tax on cigarettes.’

Ramić-Čatak hopes that government officials will take action in 2008.