The owners of stolen cars found at the scrap yard of Mate Šimić, are waiting for years to be informed about the fate of their cars. The court has ordered the stolen cars to be returned to a scrap yard where they were seized. 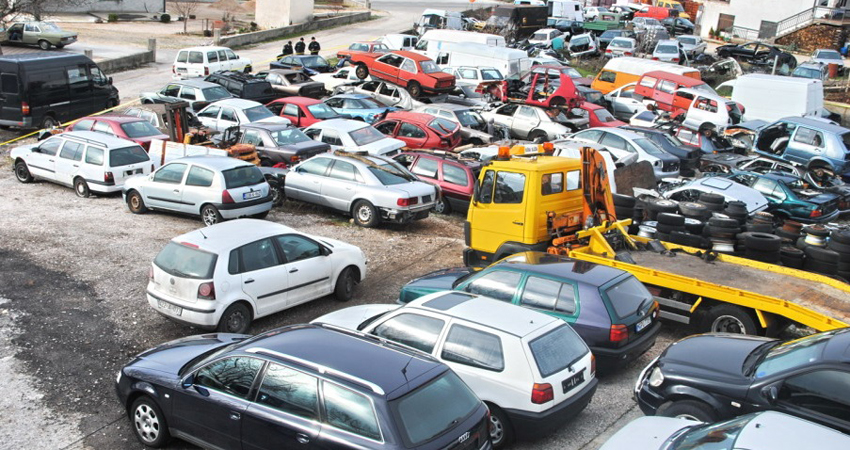 Mladen Sučić, a disabled war veteran from Stara Bila in the central Bosnia took a loan to buy Golf IV in June 2007. The car was retrofitted for drivers with one leg. Two months after the buy, the car disappeared from Sučić’s garage.

The Federation Police Authority found the parts of this and other stolen vehicles during its raid of Mate Šimić’s scrap yard in a West Herzegovina town of Grude in October 2007.

A Chance for Judiciary to Recover a Failing Grade
Mate Šimić, a car dealer from Grude, was arrested again after the BiH Prosecutor’s Office changed a prosecutor on the case under the police pressure.

Police officers found 87 cars, complete and in parts, on the scrap yard and other buildings owned or used by Šimić and his associates. The forensic team found that the cars were stolen from Bosnia and Herzegovina (BiH), Croatia and the countries of European Union. Police also found various documents for identifying cars, blank ownership forms from Switzerland and other documents which fingered Šimić as a person who bought and re-sold stolen cars and forged ownership documents.

Police has never informed Sučić and other owners that their cars were found and that they could take them over. To make the matters worse, the Court in Široki Brijeg ruled that the remnants of the found vehicles should be returned to Šimić’s scrap yard.

Information about his car Sučić received only recently when he was contacted by a reporter from the Center for Investigative Reporting (CIN) in Sarajevo. He was unpleasantly surprised. He said that he reported the theft straight away, but the police has never informed him about the results of the search.

The engine and other parts of Sučić’s car were sitting at the police depot in Ljubuški for the past six years, together with other vehicles and various parts confiscated at the Šimić’s scrap yard. They were used as evidence against Šimić at a 2010 trial handed down a sentence of three years and eight months for concealing stolen cars with the intention of reselling them. However, a year and half later at the new trial, Šimić was acquitted. Even though the court established who the real owners were, they have never been informed that their cars were found.

Sučić told the CIN reporter that he needed the car because he went often to a doctor for check-ups. Two months after the theft, he took out a new loan and bought another car.

“Do you know how it feels to be somebody who needs a car, who cannot make one meter without a vehicle”, says Sučić who is paying back more than 23,000 KM in loans for both cars.

Sučić is the father of three minor children and the only breadwinner in the family.

Meanwhile, he got in touch with the Ministry of Internal Affairs of the Central Bosnia Canton whose officials told him to contact the Federation Police Authority. Even though he wrote to them on several occasions, he has not received an answer.

Stealing of an SUV

Something similar happened to Philip Lilleyman, a retired British soldier and a diplomat whose Jeep Cherokee was found at the scrap yard. The vehicle was stolen in Trebinje in East Herzegovina where Lilleyman bought a summer house with his wife Linda.

The Jeep is an older vehicle to which his wife was very attached. “She loved the car. It was a little bit historical car”, told Lilleyman the CIN reporter. He said that they bought it in America in 1999, and then shipped it to Africa and later to the UK. Eventually, it arrived in Trebinje.

The two spend several months of every year in the town and the rest in the UK where they heard of the theft. It was in the begging of 2007. The thieves did not steal the car right away because there was no battery in it, recalled Lilleyman.

The first piece of news on the car he got three months ago when contacted by the CIN reporter. According to a Šimić verdict, Lilleyman got his car back almost three years ago. He said this was not true. After talking to the reporter, he went to the police station in Trebinje, where he had reported the theft, and the police there got in touch with their Ljubuški counterparts.

Lilleyman tracked down his jeep there, but he was disappointed.

“It was standing out in the open air and it was in a very sorry state. The driver’s window was open so the weather got inside and it’s a load of junk inside the vehicle as well.”

He could not take the car back, because the police insisted that his wife had to formally identify the vehicle as she was the owner.

“My wife is really upset about the fact that her car, that she likes so much, was stolen and I don’t really think she will enjoy seeing it in it’s current condition”, said Lilleyman.

In order to make it difficult to track down the real owners, the thieves removed the original chassis numbers and put on the new ones.

The police told him that before driving he would have to take the car to the School of Metal Engineering in Sarajevo as it is authorized to incise the original identification numbers.

Lilleyman said that it’s not worth fixing the car after everything that happened to it. “The thing is, it’s now 16 years old. I know that in UK I could buy 16-year old Jeep like that for less then 2.000€.”

He said he planned to sell it into the spare parts. “It cost me huge amount of money. Not only did I loose the vehicle, but I had to buy another vehicle to cover it.” For new car and jeep Lilleyman paid 22.500 KM.

The police explained to him that they could not call him earlier because of a reported error. Someone on the police force entered the wrong identification number of his vehicle into the database of found vehicles. He said that he was disappointed and that it looked to him like there was no real effort to find his stolen vehicle.

Return of cars to a scrap-yard

After the 2007 police operation, Šimić was tried before the Municipal court in Ljubuški. The court seized all vehicles whose owners were identified during the investigation.

However, those have never been returned to their owners because Šimić’s defense appealed the verdict before the Cantonal court in Široki Brijeg. Judge Katica Artuković who presided over the first-instance trial said that cars were evidence to be kept until the binding verdict is handed down.

In October 2010, Šimić was sentenced to three years and eight months in prison for hiding of things obtained through criminal offence. Following appeal, the Panel of Judges at the Cantonal court in Široki Brijeg acquitted Šimić after the prosecution failed to prove that he knew that the vehicles and the car parts had been stolen.

The Court ordered all seized cars and car parts to be returned to Šimić. The Federation Police in whose custody were stolen vehicles refused to execute th order. Instead, they wrote a petition to the BiH High Judicial and Prosecutorial Council, a judiciary oversight body, appealing the Court’s decision. They have not yet received an answer.

The police said that they filed a petition because it was established that vehicles and other spare parts at Šimić’s scrap yard were stolen and that forensics established beyond doubt that identification numbers on the vehicles were forged.

Even though she did not want to comment a decision by the Cantonal court, judge Artuković said that a stolen vehicle cannot be returned to a perpetrator.

“It would be the most desirable for a vehicle to be returned to its owner,” said Artuković.

She explained that the owners can file a lawsuit that would call for assessing the damage on vehicles that have rotted at the police depot for years.

The Šimić Brothers in Jail

In a repeated police operation at the Šimićs’ in December 2012, the Federation police found again stolen cars. At the scrap yard of Mate and his brother Blago police found 30 allegedly stolen cars. At the Šimićs it also found blank forms for vehicles and around 12 kilograms of canabis, as well as explosive and a number of other weapons. They were released from jail tThe day after arrest

The state prosecutor Saša Sarajlić, who was in charge of the operation, decided against interrogating the suspects. He also did not order jail despite police warnings that the Šimićs can tamper with investigation, influence witnesses and hide evidence.

In mid-April a prosecutor Dubravko Čampara joined the investigation. The Šimićs were arrested again under the charges that they planned the assassination of the Police Commissionaire of the West Herzegovina Canton. Police found at Šimić’s scrap-yard another ten cars that are considered to be stolen.

Nowadays both of them are in jail waiting for prosecutors to decide whether or not they’ll bring charges against them.