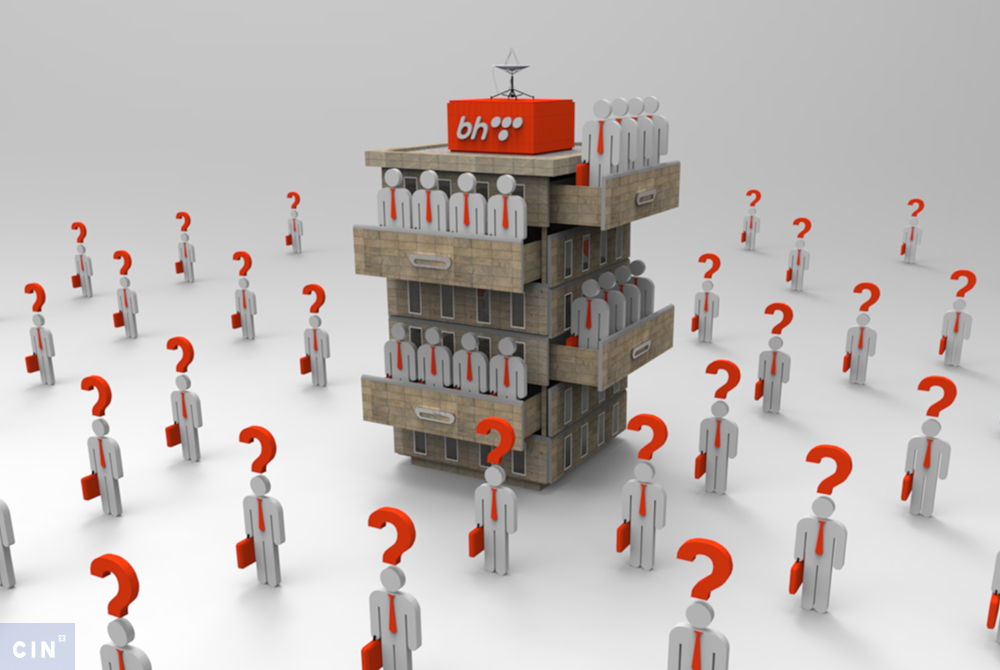 Four years ago, the largest telecom company in Bosnia and Herzegovina (BiH) moved to new headquarters in downtown Sarajevo. It turned out that the building wasn’t big enough.

So, after the big move, BH Telecom continued paying rent for buildings owned by others or also continued to house hundreds of employees who could not be fit into the new building in old structures, according to the Center for Investigative Reporting (CIN) in Sarajevo.

The company invested at least 35.8 million KM in the new headquarters, plus the seller sued for a debt of 4.96 million KM.

Even though two independent auditors spotted irregularities and suspected that the seller, Sarajevo construction company OKI, got “sweetheart deal”, the BiH Prosecutor’s Office could not find evidence to file an indictment and dropped an investigation against BH Telecom’s five key executives.

Hundred Employees Wait for a Spot in New Building

What the Prosecutor’s Office did find was that BH Telecom, just like any other public institution, was not adamant about competition while buying real properties and did not follow procedures BiH Law on Public Procurement sets out.

Even though the state prosecutors reason that the company faces long-term consequences because of procuring a building too small from the start, they could not establish damage.

In 2010, the company’s then general manager, Nedžad Rešidbegović, stated that the purchase of the building would satisfy a long-sought goal to combine all departments in one place. The new building was supposed to house 550 employees, but according to the present general manager Mirsad Zaimović, it can’t hold more than 300-odd employees or nearly half of the planned capacity.

“We strived to accommodate as many employees as possible and currently there are 470. The rest are housed in another six buildings in Sarajevo“ he said.

He acknowledges that the new building is crammed full.

In an office intended for four employees six now work, said Zaimović. According to him, the headquarters must house up to 100 people now in other buildings.

“A number of employees” complained of lack of space right after they finished moving in and they complained to then FBiH Minister of Transport and Communication, Enver Bijedić. He said that he ordered the BH Telecom’s Supervisory Board to have internal auditors review the complaints. They found that management did not pay much attention to the adequacy of the building, but just wanted to buy from the OKI firm no matter what.

The Audit Office for the Institutions of the Federation BiH stated that, “It was more than obvious that moving into the new office building would not solve fully the accommodation issues of all HQ employees, which is why rent will continue to be paid for one-third of them.“

Despite that, the former general manager Rešidbegović told CIN that the building has more space than the company needs. BiH does not set standards required for office space per an employee, so architects plan according to what investors’ want, CIN learned from several architectural experts.

According to the bill of sale, BH Telecom bought less than 13,000 square meters from OKI. The number includes buildings, garages and parking spaces and was negotiated for a price of 35.5 million KM including VAT. However, the measuring done after the purchase has shown that properties did not fit the blueprint’s figures in some cases.

Findings of the BiH Prosecutor’s Office, reports filed by the Center Borough, and various construction planning outlets and commissions, found that the useful space of the BH Telecom’s new building was up to 888 square meters less than has been agreed.

According to the BH Telecom’s accounting department, the building was overpaid by 2.2 million KM, and the company also had to pay higher duties than it should have had to for landscaping and VAT. Also, buying the building and finishing the construction were five years late. Because of this, BH Telecom spent 5.4 million KM for rent it didn’t expect to, according to a report by the companies Audit Board.

The rent costs may have been even higher, because the auditors did not take into account that for two months after moving, the company rented two floors in the Sarajevo UPI skyscraper, while the rent for offices in the Post Office building in Dolac Malta neighborhood was paid until May last year. After the company took over the new building, it found water breaching into the basement. Additional delays were caused by complaints about the selection of a firm to finish construction.

BH Telecom refused to share with CIN details about rental costs stating that would constitute a breach of the confidentiality clause.

Also, BH Telecom also does not want to share with the general public its investment programs, appraisals and transcripts from the Board’s sessions prior to the building’s procurement. Some managers involved in the procurement did not want to discuss the subject at all.

In September 2005, the BH Telecom’s Board decided to build a business center. Their investment proposal called for acquiring land on which they would construct a building of 20,000 square meters. Their estimate was that it would cost them around 80 million KM and that it would accommodate 1,000 employees. In the same year they put out a call for the purchase of land, but it did not happen because all the quotes were too expensive.

Two years later, new management headed by Rešidbegović changed course. According to new orders, the head of the Executive Bureau for BH Telecom’s Investments, Jasminko Akšamija, reviewed five bids without public procedure. Four were related to land, while one was about an unfinished building owned by OKI and its owner Edhem Okerić.

Soon after, Akšamija proposed to the management that OKI’s bid was the best one and that other bids had issues with zoning or with the sellers’ requests regarding use of the planned building.

The BiH Prosecutor’s Office found that BH Telecom decided at that point to buy an unfinished OKI’s building instead of the land, which went against the grain of the company’s the investment plan.

Prosecutors tried to establish if managers Rešidbegović and Akšamija made that decision because of political influences or for private gain, but were unable to prove their suspicions.

In the same year he became general manager, Rešidbegović also joined the governing Party of Democratic Action. Bakir Izetbegović, Akšamija’s brother-in-law, was vice-president of the party at that time and is the party leader today. Another party member was Ševkija Okerić, a brother of OKI’s owner and a close friend of the Izetbegovićs. Bakir Izetbegović, his wife Sebija and Ševkija Okerić are co-owners of 5,000 square meters of land in the elite Sarajevo neighborhood of Poljine.

After OKI was selected as a preferred seller, things started moved fast.

Even though it had started negotiations with OKI in mid-October of 2007, BH Telecom put out a new call for applications in which it was again looking to buy real property. This time it specified that it was looking not only for land but also for a completed or uncompleted building that was half of the size of what the investment plan had called for.

OKI met those conditions and BH Telecom’s commission shortlisted the firm along with bids from Teloptic and Interinvest. The management was to choose one and selection would have been a godsend for the firm selected because all were finding it difficult to sell their properties at a time of world recession.

Soon after it had put out a call for applications, BH Telecom commissioned LOK firm to appraise OKI’s building. This was not done for two other bids.

“We were just researching,” said Rešidbegović who claims that they were not aware of other bids at the time. However, those bids were not appraised afterwards either.

As soon as the appraisal was completed, Akšamija proposed changes to the Investment program which called for a purchase of building half the original size.

Thus, auditors concluded that the management used information from the appraisal to amend the Investment program so that it fit OKI. Also, the BH Telecom’s Supervisory Board approved 45 million KM for the purchase, which was nearly identical to a price that OKI proposed in its first offer.

Auditors concluded that all BH Telecom’s activities since the end of 2007 concerning the future headquarters pointed to the favoritism toward the appraised building.

After the Investment plan was amended, the Board of Directors threw out Interinvest’s offer worth 77 million KM, because, according to Rešidbegović, the offered building was too large and too expensive. The second bid from Teloptic was 2 million KM more expensive than OKI’s, but the management did not push it out of the picture even when it started negotiating price with OKI. Instead, at the end of 2009, Teloptic dropped its offer explaining that it sold the building to another buyer.

After taking over the unfinished building, BH Telecom paid 30.5 million KM to OKI. The remainder of 4.96 million KM up to the agreed price, BH Telecom kept because the two firms could not agree about the level of construction and the costs for the work needed to finish the building, said Rešidbegović. According to the contract, Telecom was supposed to pay this money to the seller if the remaining construction costs did not exceed 4.96 million KM.

The construction picked up in mid-2013. Unioninvest won the contract worth 5.7 million KM, which was more than the sum that was kept. It also turned out that the building’s final size was considerably smaller to what was in the contract.

A year later, some headquarter employees finally moved to a new address, but they never paid OKI the remaining money.

It remains unclear what size building the company actually bought. The BiH Prosecutor’s Office found nine different calculations of the building’s size. One of the last ones, done by the Center Borough’s commission for code compliance, found that the building was missing 358 square meters compared to the contract. This is several meters short of the total size of all offices on one of the building’s floors. Then, the Prosecutor’s Office hired expert witness Vildana Taso to conduct the same analysis and the discrepancy she found was nearly double of that figure– as much as 733 square meters. In the end the prosecutors accepted the municipal estimate with the explanation that it was done by the official institution.

One of the nine appraisals was done by a BH Telecom’s commission which found a discrepancy of 888 square meters. OKI objected, reminding BH Telecom that it had no objections of the building’s size when it issued the certificate of acceptance.

At the end of the day, in 2016 OKI sued BH Telecom over the unpaid sum. Owner Edhem Okerić did not want to discuss this with CIN. Even though the court case is ongoing, BH Telecom’s former general manager Rešidbegović told CIN that OKI might be awarded up to 2.8 million KM in damages.