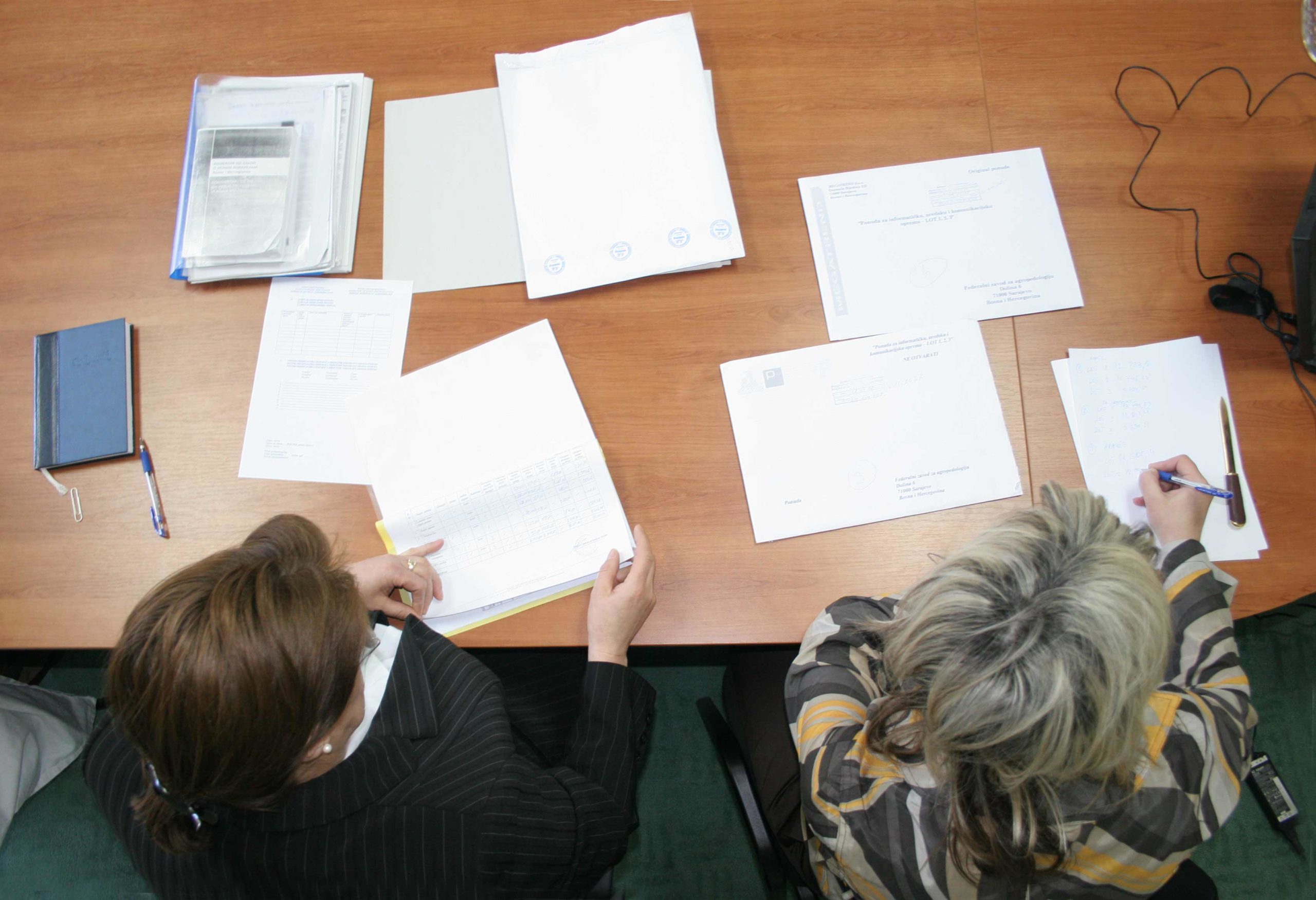 Three years since a state Law on Public Procurement was adopted, tenders are still being adjusted to help favored bidders and ultimately enrich the officials handing out the contracts.

Last fall, the Corporate Information Network of Austria, which provides data to investment-minded business executives, ranked corrupt public procurement as a top challenge for Bosnia and Herzegovina (BiH), right after divided government. The procurement system leaves openings for organized crime and political party influence over who gets contracts and there is evidence of manipulation to steer public money to particular bidders, the Network said.

The World Bank continues to rate BiH 105th out of 178 countries as a place to do business, in part because public procurement is not adequately enforced and still is not transparent.

Contracting agencies told European Union investigators last year that the new law has complicated the tender process, making it slower and more expensive. Eighty percent of the businessmen polled by these investigators said corruption in tenders was an ‘overwhelming’ or ‘important’ problem.

To be the president or a member of a tender commission continues to be a lucrative business for many civil servants and functionaries.

Dragan Đuranović, 41, and Novak Radojčić, 48, municipality officials from Doboj, were the main figures in a 2006 bribery and tender rigging case. They might never have been caught had there not been a falling-out between the conspirators.

Court records show that Miroslav Gojić, owner of the Teslić electrical firm IET, contacted Radojčić, then head of the municipality’s Housing and Utility Services Department, about help winning a contract to wire a shopping mall worth about 126,000 KM.

Radojčić made a generous offer. He said he could ensure that Đuranović, vice president of the municipality Assembly and president of the commission handing out the tender, would hand IET the tender regardless of what others bid. In return, IET would only formally apply for two other tenders. Đuranović, who previously had been convicted and fined for abuse of office, requested 10,000 KM from Gojić, who then paid half of the requested amount.

‘So, there is the sum for the project, how much something is worth and it’s all in the percentages. There was no quid pro quo, got me?’ said Gojić.

IET did get the contract and completed the work. All might have remained business as usual in BiH except that Gojić was not fully paid by the municipality. He turned once more to his friend Radojčić and asked him to intercede with the Doboj financial department. Rodojčić agreed to help a second time but demanded more money. At this point Gojić became suspicious and went to the authorities. He was granted immunity to testify against the two municipal officials, who in 2006 were convicted of abusing their authority and taking bribes. They were sentenced to three months in jail, were fined and ordered to repay Gojić.

The Way Things Are

For his part, Gojić has no problem with having to pay officials a cut in order to get work. He said it is difficult to get a tender otherwise.

The Center for Investigative Reporting in Sarajevo (CIN) talked with some 100 businessmen who likewise said they were ready to bribe commission members and considered it normal.

Pero Babić, director of Trioprint in Banja Luka, calls tenders ‘a public thing so that someone can justify their taking of money’ and said that he would be eager to grease a commission’s out-stretched palms in order to get a job. ‘Well, I’d pay. Depends how loaded the contract is’ he said.

Every government agency or public institution is obliged to set up a tender commission when giving out a contract for public work. They usually include three, five or seven members who are supposed to be knowledgeable with regard to the law, the economy and related fields, depending on the type of procurement and its complexity and size.

By law, they are supposed to be ‘independent of tender participants’ and ‘private persons with flawless reputations’ who sign statements pledging neutrality and confidentiality.

But the entrepreneurs CIN interviewed said that commission members they had dealt with tended to be ‘people who will ‘swallow’ what they’re told to do’ as Vojin Mitrović, director of Oktan Promet in Bijeljina put it. He is president of the Republika Srpska (RS) Association of Gas Station Owners.

‘These people should be qualified for this or that field and services or goods. However, in reality, they are apparatchiks who are there ‘to exercise goals into deeds’ and who will bring an end to the choice of the supplier already decided on.’

Ducking Under the Law

There are diverse ways for an agency to get around a pesky law that demands contracts be awarded fairly and on the basis of price and qualifications. One common way is to keep tenders small. The law does not require that work and services for less than 30,000 KM be put out to bid.

Even large jobs can be split into smaller portions, each for under that amount, and then handed out to friends or partners without public competition.

In the Jan. 23, 2006 edition of the BiH Official Gazette, the Banja Luka Clinical Center posted a notice that it had bought the following items from Broma Bel, a Laktaši company: a thermostat module for detection of homo-cultures, TB and fertility testing for 29,900 KM; a starter for the computer processing of homo-cultures for 9,191 KM; software for tracing homo-cultures for 29,900 KM; and a transfusion system for separating blood elements for 24,603 KM.

Transparency International (TI) BiH noted that the first three items appeared to be a single medical apparatus that had been dismantled to avoid public procurement procedure. The Ministry of Health and Social Protection responded to TI’s complaint and ordered an investigation by the clinical center that was referred to prosecutors.

Mirko Stanetić, the newly appointed director of the clinical center, said the Banja Luka Prosecutor’s Office is continuing to investigate his predecessor Dragan Kostić in connection with this purchase. He said clinic purchase practices have changed since then.

‘When I read the Law on Public Procurement the first time I literally couldn’t understand anything’ said Omeragić. Once in the post he took some seminars on the topic.

Emir Zalihić, sales director of Multimedia Computer Center (MMCC) of Sarajevo, said that public procurement is currently being run by amateurs who are making decisions, scoring, recommending and picking winners without understanding. ‘Most of the investors are only filling up the slots for the sake of it…you know that, a lawyer, economist, member, president etc…But what is important in all of this, starting with a commission’s president, not to mention the members, is that in most cases these are the people who absolutely have no clue about this’ said Zalihić.

Amir Pilav, chairman of the Procurement Review Body, said that foreign experts drafted the Law on Public Procurement and that BiH at the time had no experts of its own in this field. Decisions on how to interpret and use the law have made for difficult problems in its implementation.

Đinita Fočo, director of the Public Procurement Agency, which was set up to monitor implementation of the public procurement law, admitted to ignorance and a lack of expertise about public procurement. It is a new field for BiH, she said, only dating back to 2005.

European Union experts who have looked at public procurement here recently went so far as to call for an end to commissions. Procurement, they said, could be better handled by professionals who understand procedures and would be less likely to give preferential treatment to some suppliers.

Incompetence may be a bigger reason than corruption. Fočo said that tender commissions seldom disqualify companies from bidding on public works contracts, even if they turn in outdated or wrong documentation, have no proof they have paid taxes or contributed to worker retirement and health insurance funds, or cannot prove they own the machinery and equipment necessary to get the work done.

Fočo said paperwork required in tenders to prove that firms about to be entrusted with large, important projects are not facing bankruptcy and are good corporate citizens is so crucial that the law demands disqualification for firms that cannot provide it.

But audits at various levels of government routinely turn up problems with companies making bids but failing to submit paperwork. ‘There is always a problem, or an omission during the submission of necessary documentation’ said Munib Ovčina, a senior auditor with the Federation BiH (FBiH) Auditor’s Office. Ministries, hospitals, schools and other institutions do not apply the law, he said.

In 2006, Putovi in Grude won a contract worth 4,8 million KM to repair regional roads in Herzegovina-Neretva Canton (HNK). The company failed to turn in bank guarantees and documents from the court registry not older than three months as required. To prove it had technical equipment on hand, the company was asked to submit vehicle registrations. The vehicle registrations they turned in had expired in 2004 and 2005.

FBiH auditors said the offer should have been rejected as incomplete.

Tender commission President Boro Bukvić denied blame for this. ‘I am not a policeman…My job was not to check if the vehicle was registered at that moment’ he said.

Sarajevoputevi won the March 2006 tender for the reconstruction of the Marindvor –Baščaršija – Marindvor road, a project worth nearly 3 million KM. But the firm should have been disqualified from consideration because it submitted an outdated validation from the court register.

‘That was in contrast to the law’ said Fočo.