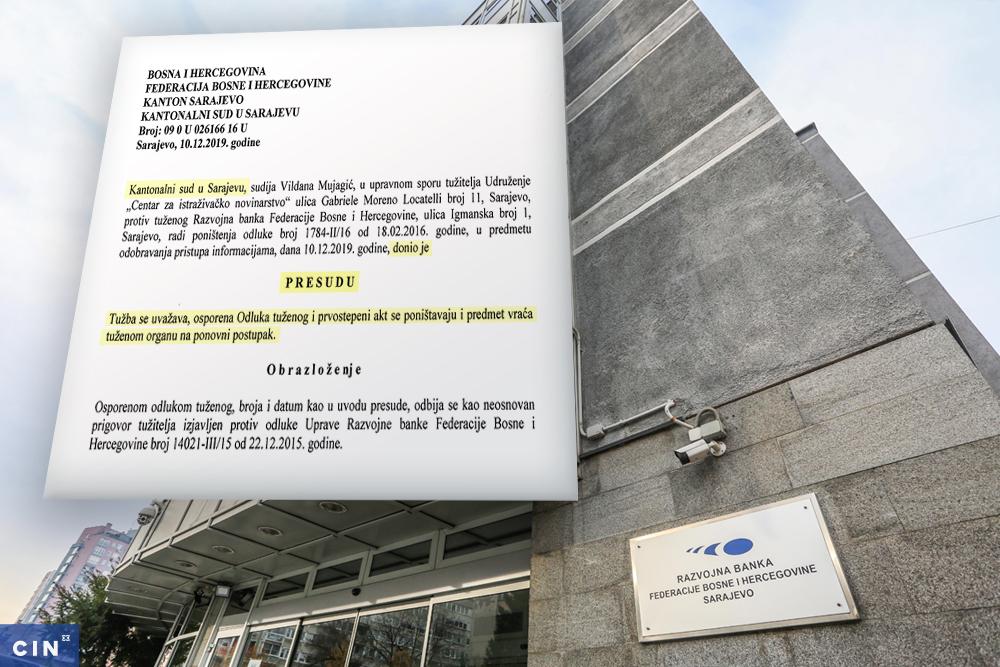 The Cantonal Court in Sarajevo ruled in favor of the Center for Investigative Reporting in Sarajevo (CIN) in a judicial review case. Four years ago, the Federation of BiH Development Bank refused to disclose information concerning loan amounts, their purpose and other conditions related to 25 firms. The court stated that this determination was not legal and appropriate.

At the time, the bank’s decision for turning down the request was that the bank was 100 percent owned by the FBiH cabinet and was neither a government institution nor was financed by taxpayer money and that disclosing loan records would represent a breach of confidentiality and the violation of law.

The court reasoned that the Bank should have followed the FBiH Law on Freedom of Access to Information exactly because it was in the FBiH government’s ownership. From now on, the Bank will have to disclose information to media or will have to prove that that there are grounds for refusal based on the Freedom of Information Act (FOIA).

This is eleventh suit that CIN won against public and government institutions for withholding public information or limiting access to it.

Every year, by citing state and entity laws on freedom of access to information, CIN reporters collect government records they use to uncover misuses of public funds. Based on journalists’ work, the authorities initiate numerous investigations and file indictments. Reporters’ work has also led to changes in the legislation.

CIN regularly informs citizens about the public money spending — including information about loans handed out by the development banks, as well as government agencies’ business deals with private firms. On the other hand, government institutions are inconsistent in their practice of law and its application – while some disclose all requested information, others search for ways to avoid disclosure.