No vacancy at BiH prisons

Prisoners may be better off staying in The Hague than face being sent to Bosnia-Herzegovina''s dangerous and crumbling prison system. The disparity in detention facilities between the new State Court War Crimes Chamber and the resources available to the lower courts is just one of the credibility issues facing the international community’s latest effort to spur reconciliation between the ethnic factions in BiH. 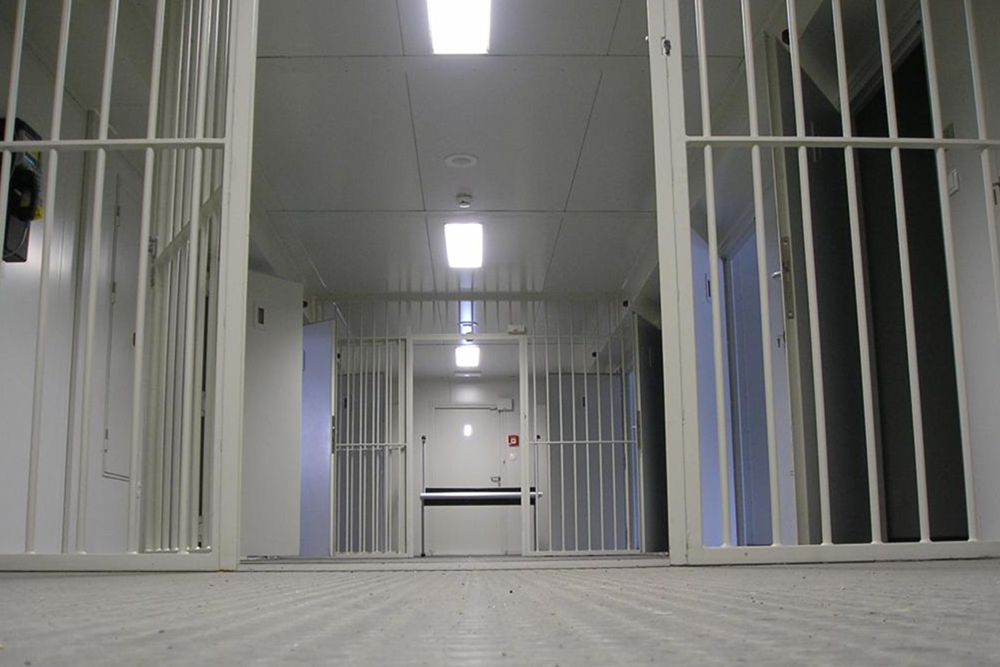 No Vacancy At BiH Prisons

If you are one of as many as 4,500 accused war criminals being reviewed now by the BiH Prosecutor’s Office, your case can be categorized as “highly sensitive” or “sensitive” depending on the severity of the crime.

Despite the difference in penalties if you are eventually convicted, you might want to hope for the more severe category if you know anything about BiH’s current prison situation.

Most of the cases that come to trial will appear in BiH’s lower courts in the cantons and in the RS local courts, which are tethered to a dilapidated prison system.

Prisons in Zenica, Foča and the infamously overcrowded Kula in Eastern Sarajevo are woefully beneath European standards without enough light and space, court and prison officials said. They will serve as detaining facilities while defendants are on trial for war crimes, and if they are convicted, they will become their home for the duration of their sentences.

If you are accused of several murders or rapes and prosecutors decide it is a significant case, you will be housed in the State Court’s brand new 21-cell detention facility a few steps away from the new court building. Built with 1.4 million USD in international donations, you will have your own “cell,” which looks more like a room, with color TV.

The disparity in detention facilities between the new State Court War Crimes Chamber and the resources available to the lower courts is just one of the credibility issues facing the international community’s latest effort to spur reconciliation between the ethnic factions in BiH.

Except for a few high profile cases, the new Chamber is taking over the full responsibility for crimes from the Bosnian War from the International Criminal Tribunal for the Former Yugoslavia (ICTY) in The Hague.

This is one in a series of articles by a team of journalists from the Center for Investigative Journalism in Sarajevo (CIN) which takes a look at the expected contribution of the new Chamber to reconciliation in BiH.

There are no places – especially any decent places – to hold detainees before and during trials or to keep the convicted, who may be sentenced to terms as long as 40 years behind bars.

BiH needs a state prison. In fact, officials had once expected the international community, intent on closing down the ICTY, to construct a 20-million euros facility by 2006. That now seems unlikely.

As BiH Chief Prosecutor Marinko Jurčević put it skeptically: “I’ll buy you a lunch if that happens.”

This is the bleak picture of the country’s prison system:

• Ministries of justice in the entities oversee 14 prisons, eight in the Federation and six in the Republika Srpska (RS), with a total capacity of about 2,600. But federation prisons are currently 20 percent over capacity and the RS beds are all but fully occupied.

• A detention unit added to the circle of the Court of BiH with 1.4 million USD of donated money is currently housing 13 war crimes suspects or prisoners, but can handle only 21 inmates total.

• Only the 750-bed prison in Zenica is equipped for high-security prisoners and that facility, about 120 years old, is partly in ruin. Director Hidajet Jabandzić said currently it accommodates 11 war criminals: four Serbs, one Croat and six Bosniaks.

• None of the facilities, except for the Chamber detention unit, meets minimum European standards for decent cells, which require cleanliness, lighting, ventilation and provisions for sleeping, resting and personal hygiene, according to Rešad Fejzagić, BiH assistent minister of Justice, and detention facility officials.

• Unlike the International Criminal Tribunal in The Hague (ICTY), which can farm out prisoners for incarceration in 10 European countries under terms of a United National agreement, BiH has no agreements with surrounding nations or the European Union countries to accept prisoners.

A year and a half ago, the European Council for Prevention of Torture and Non-Human and Degrading Treatment of Punishment, published a report about the terrible shape of BiH prisons and detention units inside prisons and police stations. It found instances of physical abuse of prisoners and decrepit conditions, especially in buildings dating from the Austro-Hungarian period. Prison officials say they have made improvements since the report came out.

Assistant Justice Minister Resad Fejzagić denies that conditions are uniformly bad, but he admits the country’s prisons are overcrowded. Many are cramming inmates four, five and six to a cell. Overcrowding in Sarajevo’s prison, he said, has reached a critical level.

Simply stating the overall capacity of the prison system is misleading, he said. Because male and female prisoners cannot be housed together, some divisions are not crowded while others are jammed.

Vlado Derek from Kreševo saw conditions at prisons in Sarajevo and Busovača when his brother Mato was detained in 2004 during his trial for war crimes. Mato Derek still faces prosecution and may not make statements to the press, but his brother said, “We had to bring him food from home to eat. If we didn’t, he would die like an animal in prison. Fitness, TV, those rights are only for big shots. And ordinary people? They are deprived of regular walks if guards get angry in the morning.”

The prison in Foča, according to Assistant Minister of Justice of RS, Mladan Mandić, could take in between 200 and 300 war crime detainees. But Ratko Lalović, the inspector for execution of criminal sanctions in the RS, said that could only happen if a pavilion destroyed during the war was repaired, at a cost of some 1 million KM.

Conditions are also rough at the prison in Kula in East Sarajevo, said Ljubo Badnjar, the director, though not so bad as they were a year ago. “We had dormitories with 40 or 50 beds each. We had to do something. We have split dormitories and now we have up to six beds in one cell. We painted the walls, provided four meals a day,” he said, then added, “It’s not good now either.” There is no budget and little equipment to deal with inmate medical problems, he said.

Branko Jolović, 41, of Milići in RS who has served four of a seven-year sentence for killing his neighbor in Kula prison, said he can remember when 20 inmates had to sleep in one room. The past year has been better, he said.

Conditions of the prison aside, its communal living arrangement makes it a security problem for prisoners accused of war crimes, the director said. That point was emphasized in mid-June when 41-year-old Željko Milovanović escaped from the facility.

Milovanović, from Beli Manastir near Osijek, holds dual citizenship from Croatia and Serbia and Montenegro and is wanted in Croatia. He was sentenced there in absentia for keeping an arsenal in his basement. He is wanted for other crimes in Hungary and Serbia and Montenegro, but he managed to get out of the Kula prison through a dispensary window.

All of this is a far cry from the detention facilities war crime suspects have been treated to at The Hague. Mirijan Kupreškić, who spent more than four years in The Hague’s Scheveningen prison before he was released on all charges and returned to Vitez, had these complaints: The door to his room was an irritatingly bright red and he was unaccustomed to the food served. “Say, they make a steak and then they put pineapple on it,” he said.

But his cell was four meters by two (eight square meters) and equipped with color TV, a lavatory and shower, a wardrobe and book shelf plus a window. He was allowed to go on walks, let out for recreation and could do his own cooking if he wanted.

In the BiH Court’s new detention facility defendants will look forward to a larger 13 square meter air conditioned room with a shower, toilet, desk, wardrobe, color TV and a window.

Housing suspects of different nationalities in that setting has caused few problems, but in BiH prisons, antagonistic inmates kept in overcrowded and substandard conditions have resorted to violence. The situation is likely to become more volatile with the addition of dozens more people accused of wrongdoing during the war.

Recently, when tribunal authorities in The Hague released a videotape showing Serbian soldiers rounding up and shooting Bosniaks in Srebrenica, there was violence between prisoners of different nationalities in Zenica jail.

The two attackers were separated from the rest of the prison population and Pušara’s lawyer has demanded he be allowed to finish serving his sentence elsewhere.

Not a single official CIN reporters talked to could offer a solution to the problem of exactly how BiH will house war crime suspects and sentenced criminals.

“I think there will be problems,” said Justice Minister Slobodan Kovač. “That is a reason for every minister of justice to be concerned.” The international overseer of the new Chamber, and the temporary Registrar of the BiH Court, American Michael Johnson, share’s Kovač’s concern. Although the registrar is working with Kovač to find money for a prison it will not be ready in time to relieve any pressure from war crimes cases on the entity prisons, Johnson said.

But that is not the problem of the internationally funded state level Chamber, he added.

“That is a result of the failure of the prison to be built years ago,” Johnson said.

“It could dramatically affect the credibility and the effectiveness of the State Court with the constituency of BiH if it (new prison) is not available soon or ever,” Johnson said.

The most hopeful view is that there won’t be as many people to deal with as seems possible at first glance.

Jurčević noted that overall in the BiH judicial system there have been 10,000 war crimes allegations against individuals, which will have to be investigated.

But not all of them will actually develop into real cases. Some charges are little more than the result of national pressure on police to make sure one side has as many charges as the other. Not all are based on valid evidence and many will be rejected by the state and local prosecutors’ offices, he said.