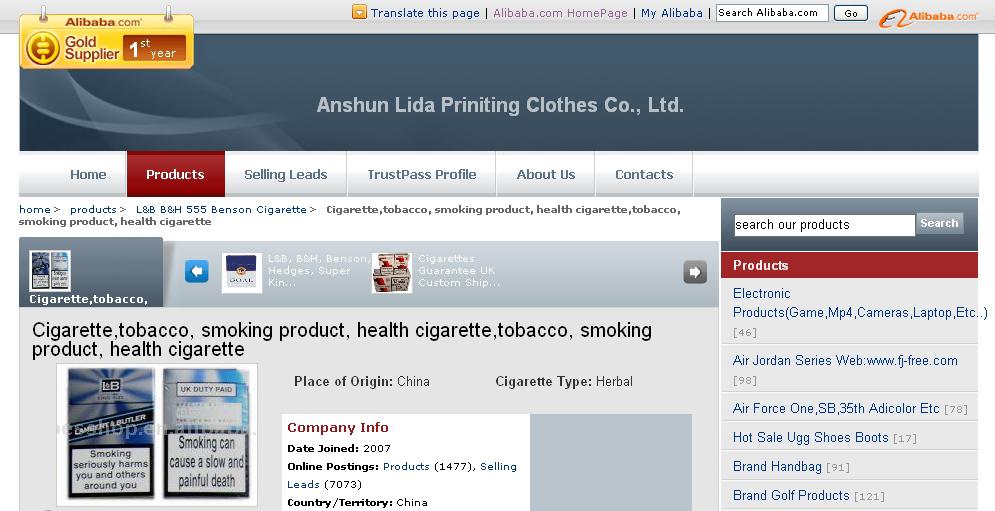 The growth of online trading websites like Alibaba.com has made it possible for just about anyone on earth to become a tobacco smuggler from the comfort of their own home. A search of the site quickly leads the user to dozens of websites that promise cheap Marlboros or any other Western brand a user might want.

Most of the sites are from China, and most of the cigarettes are fake. It is illegal in almost all countries to import cigarettes without paying custom and excise fees.

Reporters from the project logged on to find out how it works, and how they could order cigarettes without paying such fees. They found the sites quite accommodating.

‘We send them with the little parcel, it can better to send, or not, it will be danger for both, just a little parcel, it will easy to get across the customs’ wrote Sunny, a gold supplier on Alibaba.com in an email to a reporter.

Gold status on Alibaba means the supplier has a large trade volume and is trustworthy. Alibaba lists more than 15,000 traders in cigarettes from China alone, although almost every country is represented. You can also find traders in Paraguay, Bangladesh and even the United Arab Emirates.

Companies in Bulgaria and the Republic of Moldova are also using the Internet to sell cheap cigarettes. Ival Investments, a Bulgaria-based company, advertises on Alibaba.com large quantities of Golden Street duty-free cigarettes. NewPort group, a company from Chişinău, the capital of Moldova, writes on another trading web site, ‘Our company is interested in exporting cheap cigarettes to poor countries in Asia or Africa. We are producers for more then 50 years already. Our production factory is situated in Central-Eastern Europe. Companies interested, please feel free to contact us.’ NewPort sells Moldovan brands like Doina and MT.

The global Internet-based tobacco trade is growing despite serious efforts to curb it in Europe and North America. In November 2006, the European Court of Justice decided to bar online duty-free sales for fear that the online trade would lead to great financial losses for countries in the European Union. The main targets of the ruling are alcohol and tobacco dealers.

The online sellers responded by labeling their cigarette boxes with fake duty-paid stamps and falsifying the description of the package contents. Anshun Lida, another Chinese company, advertises cigarettes for the United Kingdom: ‘Cigarettes packages. According to your needs we can do the special pictures, descriptions for the goods and other details, if you like!’ Anshun even ‘guarantees’ delivery through UK customs. The company has no less than 7,000 selling leads on alibaba.com and is very prompt in answering any inquiry from potential clients.

Just like Sunny, these traders are willing to train customers in bypassing customs and avoiding paying taxes. As Sunny puts it, ‘is good business for both. You get the cheap cigarettes and I get good deal.’