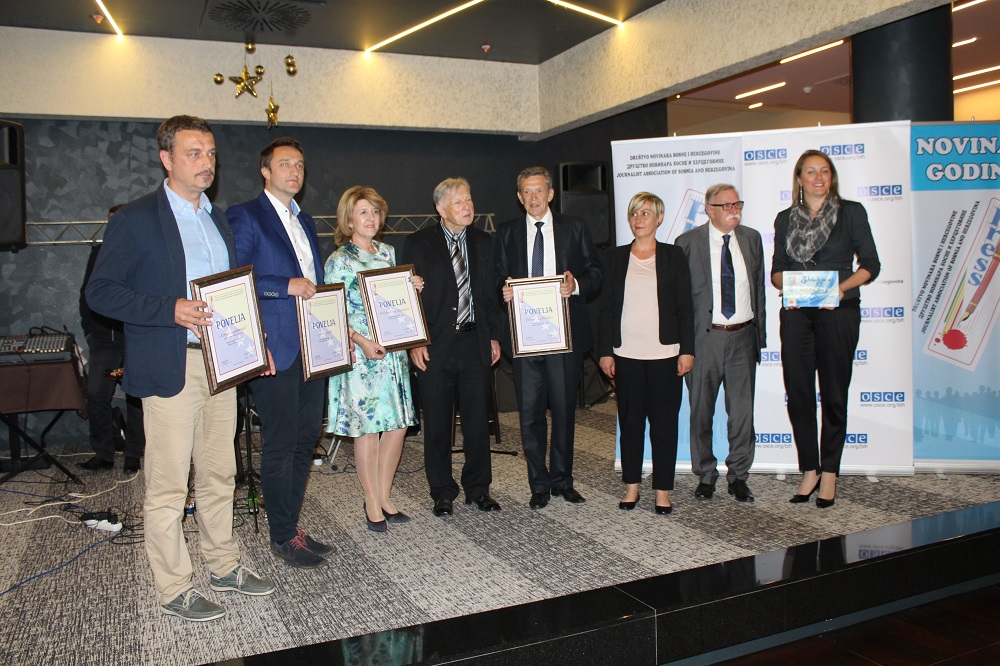 The Center for Investigative Reporting in Sarajevo (CIN) journalists Jasna Fetahović and Azhar Kalamujić received “Journalist of the Year 2016” award from the Journalism Association of Bosnia and Herzegovina (BiH).

The award was given for the series of stories and a video about a Sarajevo-based top generic drugs maker Bosnalijek with a special mention of the story “The Cost of Pills for Bosnalijek”. Reporters investigated how Russian investors took over the biggest BiH pharmaceutical when they bought its stock worth 32 million KM.

Two years later, new Bosnalijek owners filed for bankruptcy defaulting on nearly the same amount of money to the factory as they had put into its takeover.

A Sarajevo daily Oslobođenje was recipient of the BiH Journalism Association’s award for print reporting. Enver Šadinlija from the Federation BiH Radio won an award for radio journalism, while Amir Zukić, director of N1 television’s BiH program and the producer of The Pressing program received an award in the category of TV Broadcasting.

This is 22 award ceremony organized by the BiH Journalism Association.

In 2016, CIN published three other stories about Bosnalijek. Reporters had put under the spotlight the way in which Russian investors bought Bosnalijek stock illicitly, via a Luxembourg-based off-shore fund Haden.

CIN also investigated how certain money of questionable provenance used in the acquisition of Bosnalijek shares came through a Sarajevo branch of Sberbank and what damage was inflicted on Bosnalijek while it was under the management of its former CEO Edin Arslanagić.

Fishy Transactions from Russia via Sberbank
Court Froze Houses in Bosnia, but the Arslanagićis Bought New Ones in the US

Fetahović was also a recipient of an award in Moldavia related to Bosnalijek deals. In December 2016, Fetahović, together with reporters from RISE Moldova, Dumitru Lazur and Olga Ceaglei, as well as the regional editor of the Organized Crime and Corruption Reporting Project Miranda Patrucić. have become the recipients of the third award for investigative reporting as granted by UNDP Moldova.

Reporters put under the spotlight certain deals between a Sarajevo pharmaceutical company Bosnalijek and a Moldovan company Dita Estfarm worth nearly 5 million KM.