Since 2012, the Cantonal government has set up four commissions that were supposed to improve the health care system. The prime minister and ministers signed decisions appointing members including themselves. In over three years, 48 members have collected more than 250,000 KM from the Bureau’s budget.

Some commission members say that these panels made no difference, while others talk about splendid results.

Nearly half of the fees went to the “Managing Panel for the Implementation of an Action Plan for Computerization of Sarajevo Canton Health Care”. The panel oversaw the electronic linking of various health care organizations in the Canton.

Seven years ago, the Cantonal government adopted an Action Plan that heralded information technologies in public and private health care. The government was to set up a body with at least six members to watch over the process and appoint the minister of health and the directors of the Bureau, the Institute for Public Health of Canton Sarajevo, Sarajevo Canton Public Clinic, the Clinical Center of Sarajevo University and General Hospital Dr. Abdulah Nakaš to it.

The first panel appointed in 2010 finished the job. In May 2013, the new Cantonal government headed by Suad Zeljković dismissed incumbents and appointed new members. Zeljković was one of 11 members and he collected 11,000 KM in fees.

He told the Center for Investigative Reporting in Sarajevo (CIN) that he had just signed the decision on appointment: “There were ministers as well, we were on the Commission because of the office we hold.” CIN reporters found that some of the officials named by the Action Plan were not appointed to the panel, such as the director of the Institute for Public Health, Snježana Balta, and the clinical center’s director, Damir Aganović.

“I was not, believe me, I would have remembered that. I would probably have to attend some of the meetings,” said Aganović. Balta also told CIN that she was not invited on the panel.

Instead, these officials were appointed: Finances Minister Muhamed Kozadra; Housing Minister Čedomir Lukić; and Spatial Planning Minister Zlatko Petrović. Also appointed were Rasim Smajić and Haris Pleho, party colleagues of Esed Radeljaš who had just been appointed chairman of the Bureau’s Board of Directors.

Health Minister Eldan Lokmić said that the politics decided about the selection of the commission members.

“The current make-up of the government decides. We had a specific situation – we had seven, eight parties in the government and each one had a say in it, but, in any case, the idea was that competent people would have been involved,” Lokmić told CIN.

Eleven of the panel’s members have collected 121,000 KM over two years.

Tanović, the director of the Public Health Clinics, said that she had no contact with some of the members, and with others only by phone: “I am really very proud of that Commission and that engagement on the Commission, because the Public Health Clinic got a fantastic computerization of its whole system,” she said. Tanović collected for her role on this and another commission 20,500 KM. 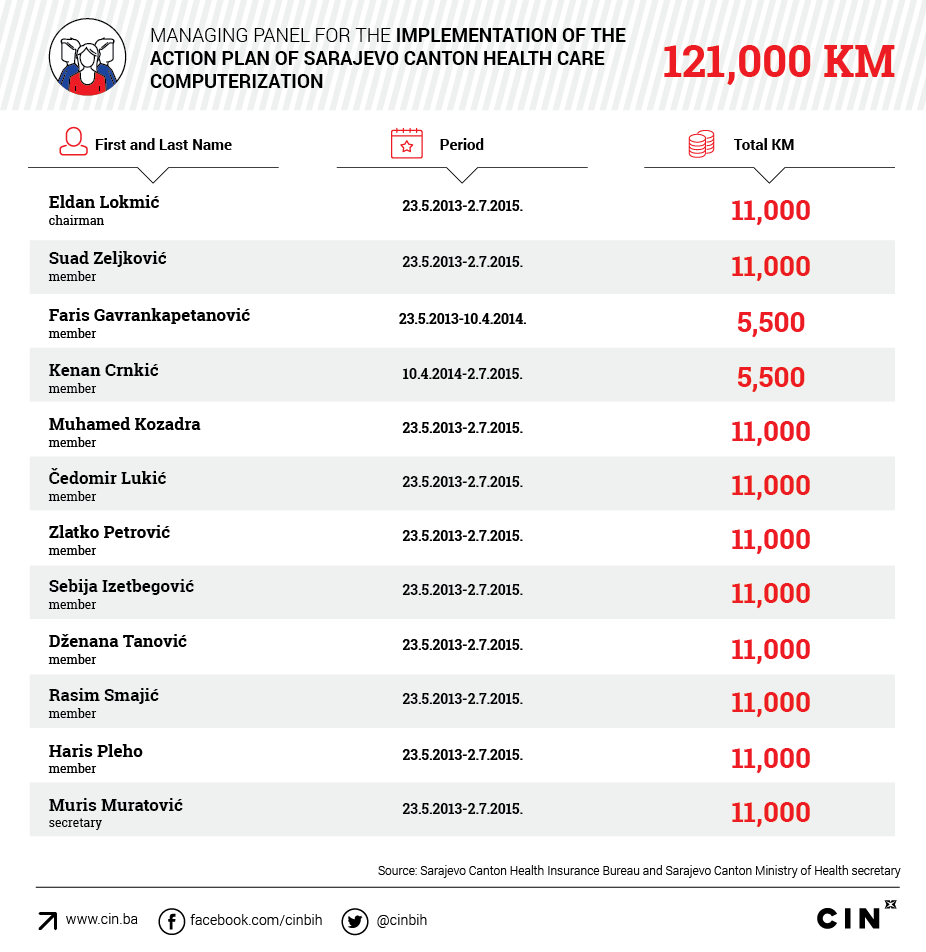 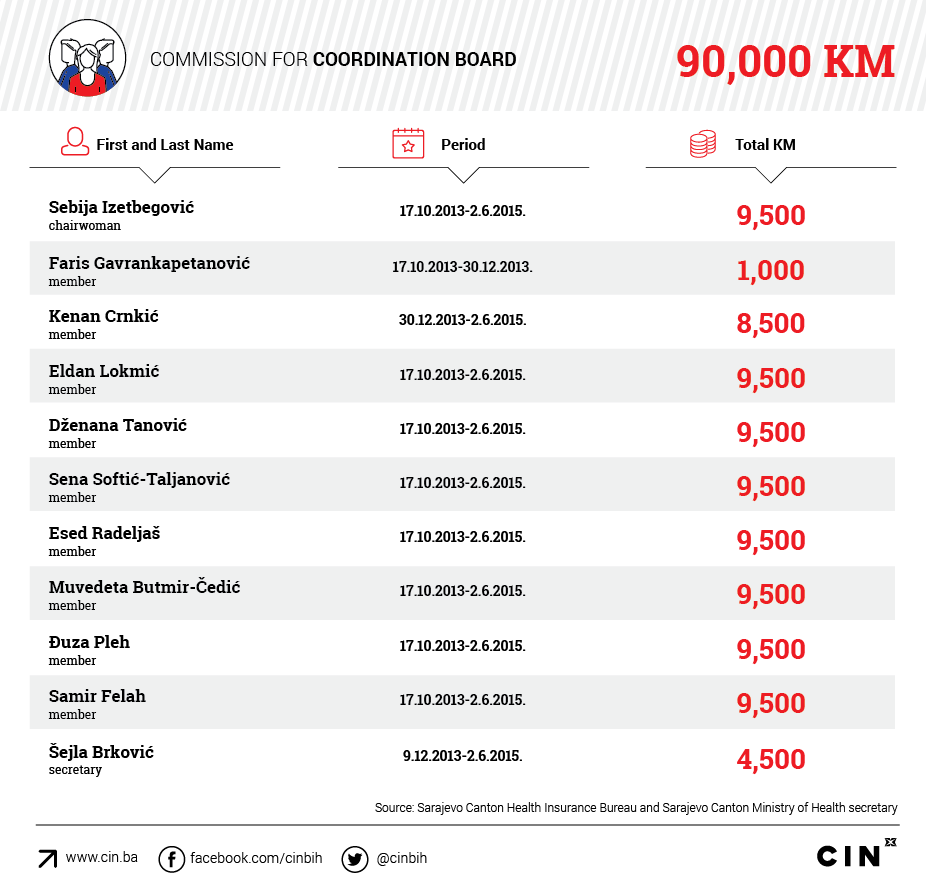 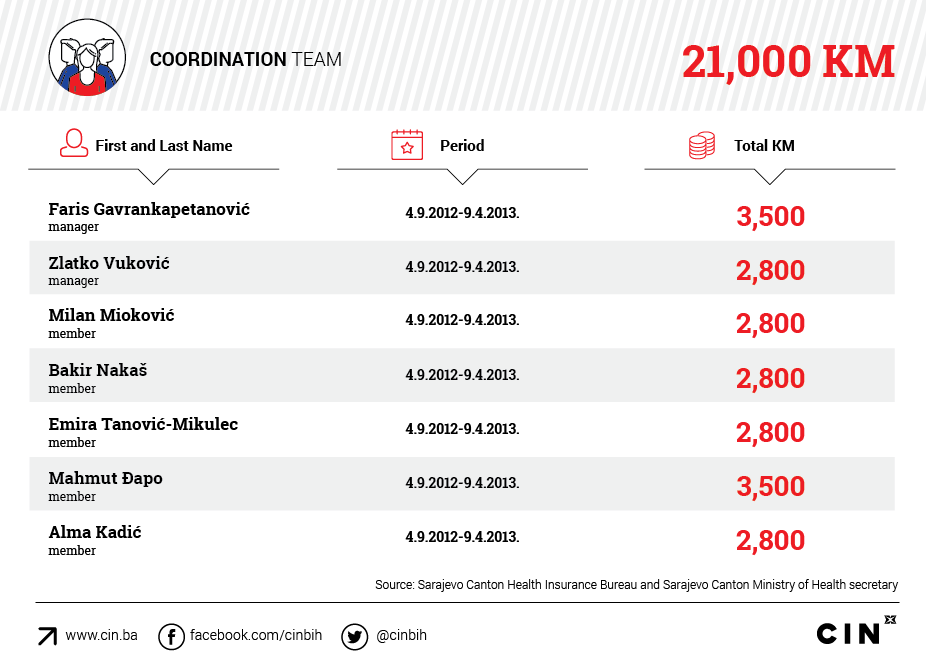 The Bureau’s coffers also financed another three commissions appointed by health care ministers between 2012 and 2016. They did not submit end-year reports but the members were reimbursed nevertheless.

In 2012, a former health care minister Zlatko Vuković issued a decision to appoint a seven-member “Team for Coordination”. He named himself and then Bureau’s director Faris Gavrankapetanović as leaders. Other members were the representatives of the health care institutions and ministries. Over seven months, members collected 21,000 KM. In April 2013, the new health care minister Lokmić disbanded the team.

Faris Gavrankapetanović – His Own Supervisor

Half a year later, he set up a Commission for Coordination “BOARD” made up of nine members including himself. Its task was to define the flow of patients for faster and cheaper check-ups and therapies.

Tanović said that the commission was well intended but did not function well: “We’ve done nothing. What’s worse, we’ve done nothing well.” She said that she was constantly arguing with Izetbegović who was denigrating the work of the Public Health Clinic. Izetbegović, who has collected for her work on the commissions 20,500 KM, did not want to talk to CIN reporters for this story.

Lokmić, who Tanović said was often absent from the meetings due to other obligations, took the same amount. She pointed out absences as a weakness of the commission. On the other hand, Lokmić said that the commission had an excellent effect.

“You see, we alone opened 13 outpatient clinics within a year. In the Clinical Center 13 and 14 floors were inaugurated as well as 11 operating theatres,” said Lokmić. She added that Public Health Clinic Kumrovec was renovated by the commission’s initiative.

When Emira Tanović-Mikulec succeeded Lokmić, she could find no record of the commission’s activities.

“I had no idea of what it’s all about, so in line with my mandate, I disbanded the commission,” Tanović-Mikulec told CIN.

The decision stated that the commission was disbanded in order to cut down expenses. Over 19 months the Bureau paid the members of the BOARD Commission 90,000 KM.

Incoming governments changed the made-up of other commissions such as the Commission for Medicine. Since 2012 to date, the Ministry of Health has been managed by three ministers from different parties – Party of Democratic Action, Democratic Front and Alliance for Better Future. Each one of them appointed a new Commission and disbanded the old one.

“A commission is more like a political than an expert body and usually commission members have always belonged to the ruling parties in the Canton,” Dr. Begler Begović, a member of the Commission for Medicine, told CIN.

Begović said members met, but also exchanged opinions about the lists subsidized drugs via email: ”During the holiday season when people are away they discuss things via email.”

The current Commission has eight members that the Bureau pays a combined 2,300 KM a month.