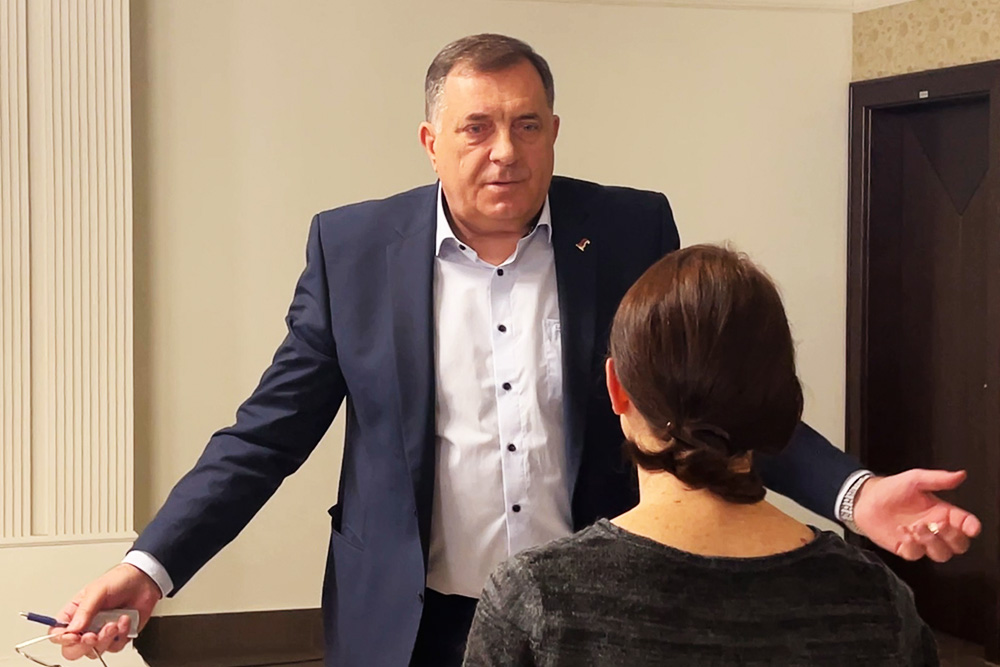 Milorad Dodik, a member of the Presidency of Bosnia and Herzegovina (BiH) and president of the Alliance of Independent Social Democrats, gave a formal statement today in the BiH Prosecutor’s Office regarding the purchase of a villa in Dedinje, an elite Belgrade settlement.

“They summoned me there, as a suspect, and then they explained that I am a witness”, said Dodik at the press conference.

It is a million-worth three-story building of 342 square meters, with a yard and a garage attached to it. Dodik bought the property in 2007 when he was prime minister of Republika Srpska (RS).

Back in 2009, CIN wrote about Dodik buying the villa in question. Journalists revealed that Dodik had to pay for the villa to be registered as its owner, but he was granted a loan for its purchase only eight months later.

According to available documents, the villa was built by the “Koling” company from Belgrade. When this company stopped repaying the loan, the villa was taken over by Komercijalna banka from Belgrade, which put it out for sale. Dodik bought it in May for EUR 850,000. According to several real estate agents contacted by journalists, the market value of the villa at the time was between €1.2 and €1.5 million.

When CIN reporters asked how was it possible for the bank to sell the villa at a price lower than its market value, the then Marketing Director of Komercijalna Banka from Belgrade, Goran Milićević, said that the bank has the right to do so to protect the invested money.

In July 2009, Dodik confirmed to have a villa in Belgrade – which was under mortgage, and which he had leased to a foreign representative office and the lease of which he used to repay the loan.

CIN reporters revealed that the villa was mortgaged for EUR 750,767. However, something does not add up with the times of obtaining the loan and registering the mortgage and title deed.

Dodik bought the villa in May 2007, and his request for registration of the title deed was granted in November of the same year.

To register the villa in his own name, he had to pay EUR 850,000 to Komercijalna Banka, Milićević confirmed to reporters: “It is normal to pay the purchase price in its entirety to transfer the ownership rights.”

Also, ownership cannot be registered if real estate purchase tax has is not paid. The tax office refused to give CIN the information about whether Dodik had paid the tax, justifying it with the Law for the Protection of Personal Information.

Less than eight months later, at the end of June 2008, Dodik borrowed BAM 1.46 million or EUR 750,767 from the Pavlović International Bank from Bijeljina, for a repayment period of 102 months and an annual interest rate of 7%. The mortgage was registered on March 19, 2009.

At the press conference organized following his visit to the Prosecutor’s Office, he claimed that CIN’s allegations were incorrect, suggesting that he had documents proving that a EUR 740,000 loan was borrowed from Pavlović bank in 2007, which he used to buy the real estate concerned. He explained that in 2008 he concluded a new contract, with a longer repayment period and higher interest rates. According to him, he is still repaying the loan.

He claimed to have repaid a part of the loan from the lease of the property to an ambassador, in part from his salary, and in part from the proceeds from the sale of two flats in Belgrade.

Pavlović International Bank was owned by Slobodan Pavlović, a businessman from Chicago in the United States of America, whose origin was from Popovo near Bijeljina. He died in a car accident in late 2021.