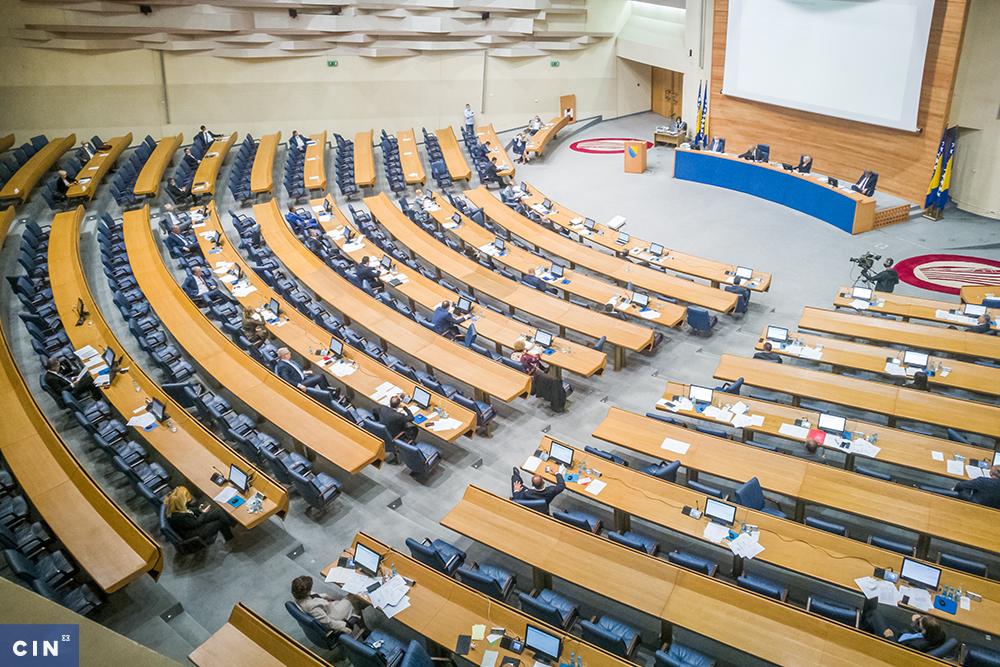 The Federation of Bosnia and Herzegovina’s (FBiH) members of the House of Representatives have agreed to receive a symbolic 1 KM in lieu of attendance, accommodation and living-away-from-home allowances until the end of the health crisis. This could add up to some 95,000 KM in monthly savings.

Melika Mahmutbegović of the Party of Democratic Action (SDA), who currently serves also as the Vice-President of the FBiH Cabinet, submitted this motion so that taxpayer money would be used to tackle the effects of the coronavirus pandemic.

“This is an opportunity to ensure a fairer distribution of funds from the Federation of Bosnia and Herzegovina’s budget”, stated the vice-president’s press release.

In the national parliament, members of Naša Stranka and Independent Block parties proposed that MPs’ and ministers’ salaries are cut by 20 percent this year to funnel this money to help those suffering from COVID-19. In another bill, Naša Stranka proposed waiving the allowances for MPs, ministers and members of the BiH Presidency, as well as the temporary suspension of certain benefits in the state institutions until the end of the crisis. The proposals aimed to save at least 3 million KM, but the majority of MPs have not endorsed them. They are to be debated in upcoming parliamentary sessions.

There has been no similar motion in the National Assembly of the Republika Srpska that could lead to savings.

Reporters from the Center for Investigative Reporting in Sarajevo (CIN) have discovered over the previous years that many officials took advantage of the system by claiming accommodation allowances even though they owned properties in the town where they worked, while departing MPs claimed transitional allowances despite earning money in public office at the same time.

It is estimated that the passage of this proposal would decrease individual income of the FBiH House of Representatives’s members by around 1,000 KM monthly. Instead of the current 600 KM in attendance fees, 300 KM in living-away-from-home allowance and 100 KM in accommodation allowances, the members will now receive a token 3 KM until the end of the crisis.

“It is dishonorable and immoral [of them] to collect all that,” says the secretary of the FBiH Vice-President’s Cabinet, Erdal Selmanović. “Those people who sit in those benches have had no activities over the past few months, but have duly reaped all of their entitlements”.

This motion should’ve been put up for vote at the FBiH House of Peoples as well. However, the Administrative Commission had turned it down. Instead, the Commission has asked the FBiH government to come up with the decrease in earnings across a range of FBiH institutions.

Apart from a salary, the FBiH MPs are entitled to: attendance fees; living expenses; meal money; vacation allowance, rent, utilities and commuting; four paid weekends to visit family; free use of government cars; assistance in the case of a death of a family member or serious disease; retiring allowance;: and transitional allowance following the end of service, which amounts to one year’s salary. 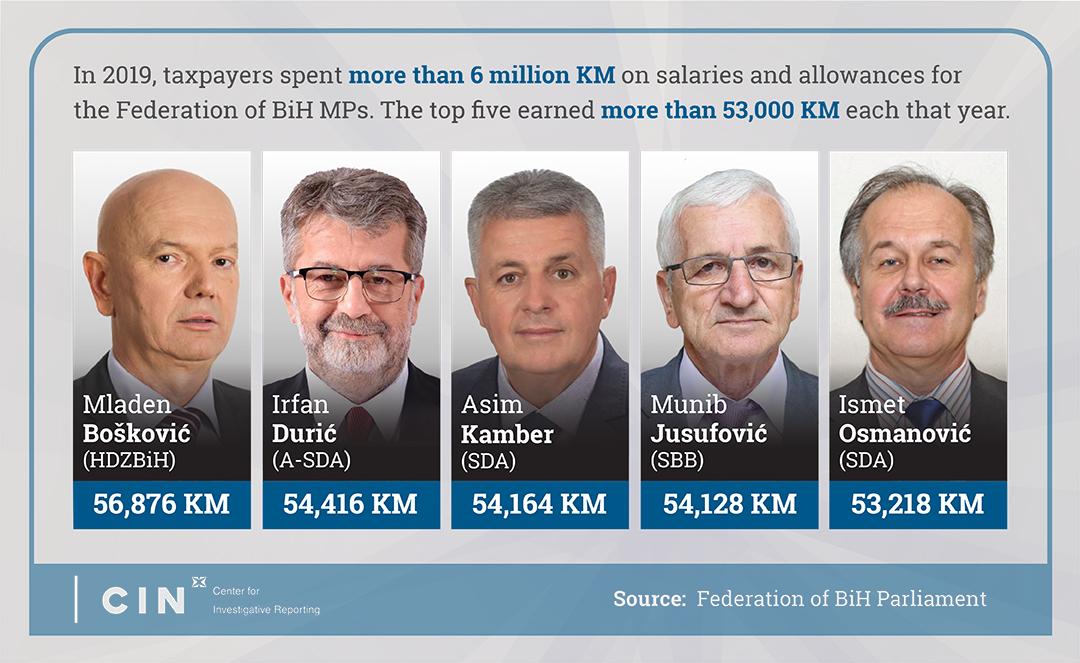 Apart from a temporary decrease in MP’s allowances, Mahmutbegović is pushing for the temporary suspension of allowances for members of management and supervisory boards in FBiH public companies and institutions through 2020. She is also advocating limiting the salaries in FBiH companies and institutions to two average entity salaries. The salary cuts would not encompass health care professionals, police, government inspectors, and other officials engaged on the frontlines of the fight against the coronavirus.

Because of the crisis caused by the pandemic, MPs from the Naša Stranka and the Independent Block parties in the national Parliament proposed a 20 percent salary cut for MPs and the state ministers. The salary cut proposal also includes advisors as well as other officials appointed by the Bosnian state presidency, the Council of Ministers, the BiH Parliamentary Assembly and other governmental institutions.

“I think that we are all aware that citizens perceive us as a privileged and alienated group of people, in a sense that we don’t show understanding for citizens’ concerns,” said Mirjana Marinković-Lepić from Naša Stranka during the parliamentary debate. “At the present moment when thousands of people have been rendered jobless, the situation requires us to respond and show solidarity.”

MPs from the Alliance of Independent Social Democrats (SNSD) and Croatian Democratic Union (HDZ) BiH have referred to the motion as populist and anti-constitutional.

“Such a bill is absolutely unacceptable and personally I think that it is my discretion to decide how much of my salary I want to give away and where will it go,” said SNSD’s Sanja Vulić.

SNSD and HDZ BiH MPs are against establishing an earmarked fund for these savings, even though, according to the proposal, the fund would have been controlled by the BiH Council of Ministers, which is composed of these parties’ members.

They also said that they were not against a decrease in salaries, but they were ready to discuss it only if the Council of Ministers were to hand them such a proposal.

The Naša Stranka legislator, Damir Arnaut, proposed the passage of a bill that would prohibit the payment of allowances and benefits until the end of the year, such as: vacation allowances; discretionary spending; long-service benefits; allowances for additional training and education in all government institutions, and reduction in use of bodyguards for senior office holders.

In that case, appointed and elected officials would not be entitled to most of their current allowances. Besides, Arnaut proposed a decrease in the amount set aside for financing of political parties and limiting the unrestrained use of government contingency funds.

The passage of this proposal could save at least 3 million KM. That money could be then streamlined to smooth the consequences of COVID-19 crisis and shared among the FBiH, the RS and Brčko District.

“It would be completely irresponsible to be against these bills,” Arnaut told CIN while awaiting a discussion on the proposal.

Naša Stranka and the Independent Block parties submitted these proposals to the Parliament in late March and early April. However, when the MPs debated them a month and a half later, the majority were against enacting them into law. MPs are set to discuss these proposals again in the next parliamentary session.

The state MPs are duly receiving their salaries and allowances even when there are no sessions, and when they don’t even show up for work. During 2019, members of the BiH Parliament’s House of Representatives had seven sittings in the chamber, while their peers from the House of Peoples had only four sittings. The taxpayers paid more than 3 million KM for this work.

An average salary of a state MP is around 4,600 KM, while MP’s monthly attendance allowance is 714 KM. Besides that, they also claimed on average 118 KM in meal money, 267 KM in living-away-from-home, and 300 KM in vacation allowances. 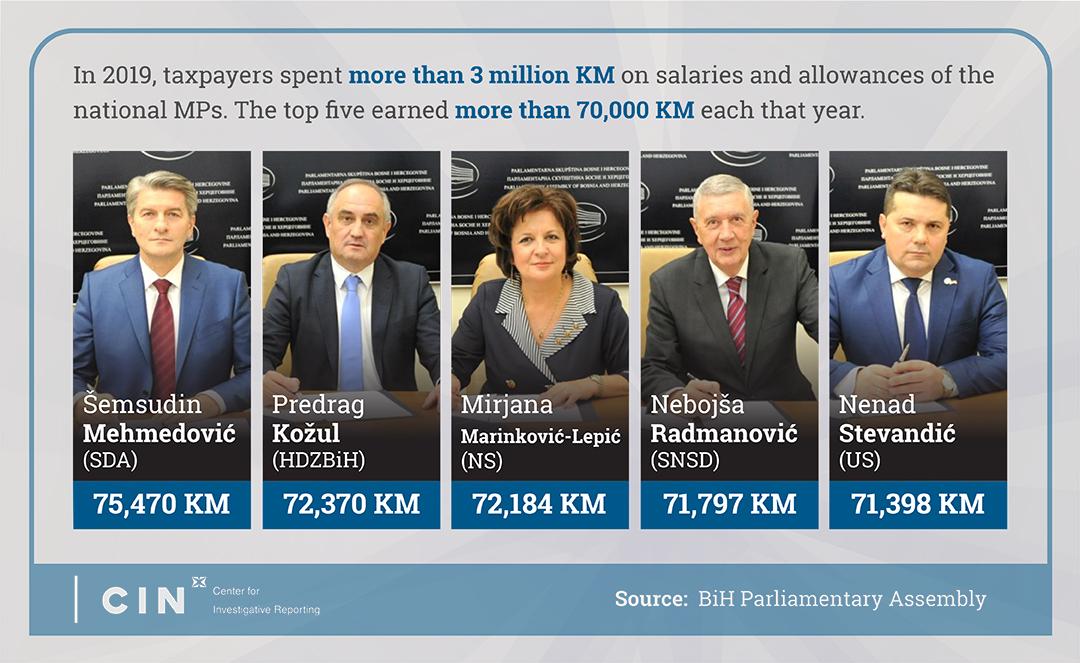 A worker on an average salary in BiH has to work six and half months for that amount.

However, regardless of their attitude or the lack of accountability to taxpayers, the income of state MPs and other government officials in the state institutions is protected by the BiH Constitution, which sets out that allowances for their work cannot be lowered during a term. Hence, when Naša Stranka and the Independent Block came up with the bill, they also put in an amendment to the BiH Constitution seeking to abolish this provision. This amendment has not been put up on the agenda.

Even though they have a high income and numerous perks and benefits to which the majority of BiH citizens are not entitled, some officeholders have taken advantage of the institutions and their position to claim allowances they don’t have a right to.

Reporters from the Center for Investigative Reporting in Sarajevo (CIN) have uncovered that the FBiH MPs from the House of Representatives and the House of Peoples and claimed accommodation allowances in Sarajevo, even though they owned properties in the city. Earlier, CIN revealed similar thing about the FBiH government ministers.

Also, officials in the Republika Srpska (RS) took advantage of vague rules to claim post-term transitional allowances, even though they had other sources of income, or an opportunity to return to their previous work. CIN revealed that this allowance went to two university professors, seven businessmen and one pensioner.

Such misuse is possible because the institutions have not been verifying the property and income of public officials, thus leaving room for appointed and elected officials to use loopholes for personal gain.